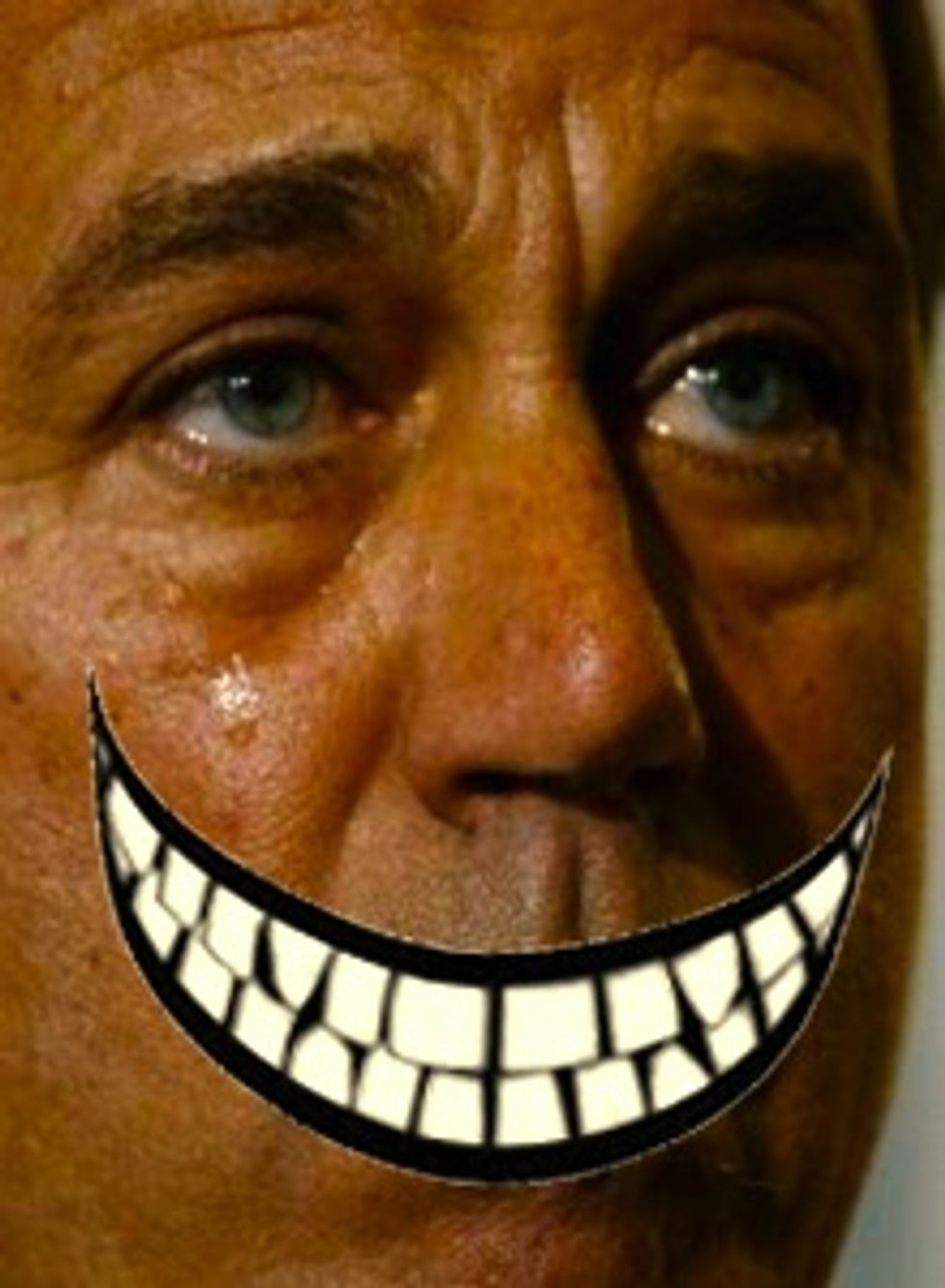 It's almost the weekend, so it is time briefly to see if all the coke-fueled anger sex "negotiating" going on in Washington has brought us any closer to a debt ceiling deal. Will America still be here on Monday when we return from our booze-fueled anger coma? What is the new Rapture date again? August 2nd? That's, like, a week and a half away! Oh yeah, so John Boehnerhas something to say about that. "We made a deal to cut $3 trillion in spending," he told the Republican conference. HOORAH HOORAY SUMMER IS BACK???!! Hahaha NO, that was the easiest trick and you all fell for it.  "Just kidding!" Boehner then said, and Republicans laughed because the idea of compromise is itself a joke to the GOP. We are all still careening down a dark unlubricated poop chute into the fiscal toilet.

Is anything happening? Uh, the Republican-controlled House passed its pointless "Cut, Cap and Balance" bill over the screams of Ronald Reagan's corpse, the president who basically invented modern deficit spending by more than tripling the national debt during his first five years in office. The Democratic-controlled Senate then rejected it, and that's about it from our nation's leaders this week.

But here you are anyway, from Politico:

A day after breathless news reports that a deal was imminent, the Ohio Republican jokingly told his conference that he had reached a sweeping agreement with President Barack Obama to slash trillions of dollars in government spending.

“I’m just kidding,” Boehner then added, drawing a laugh from rank-and-file Republicans, according to those in the room.

This strange joke so bitterly disappointed everyone that Boehner was forced to clarify again that we are all headed for imminent doom:

U.S. House of Representatives Speaker John Boehner said on Friday he's not yet near a deal with President Barack Obama to avert an unprecedented U.S. debt default.

Dismissing reports of a possible accord, Boehner told reporters: "There was no agreement, publicly, privately, never an agreement and frankly not close to an agreement. And so, I would just suggest it is going to be a hot weekend here in Washington D.C."

He means in the sexy way.  [Politico/ Reuters]