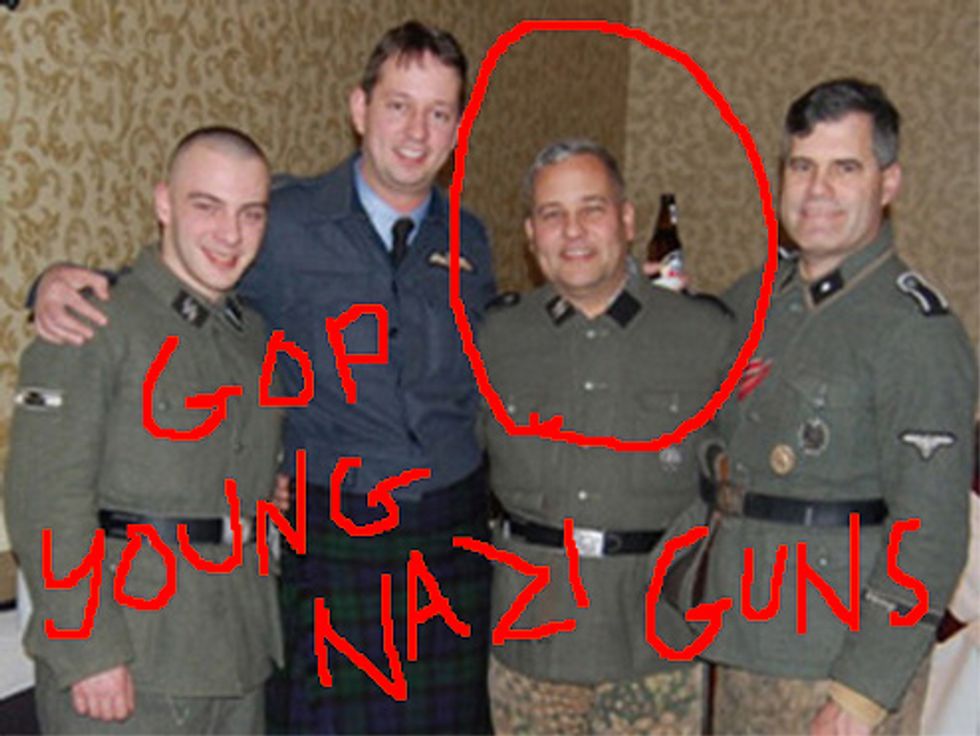 Ohio Republican YOUNG GUN (middle-aged white man) congressional candidate Rich Iott is well-known now for the revelationthat he likes to spend all his free time wearing Nazi costumes and prancing around pretending to be a Nazi. So obviously no Republican leader would appear in public with this man, correct? WRONG. John Boehner is showing off the moral values he will have as House Speaker, and those values are 1) drinking wine a lot, 2) crying whenever, and 3) the God-given right to wear a Nazi uniform at all times. Thus, on Saturday, mere days before Election Day, but not even on Halloween, Iott is holding an official campaign rally with John Boehner. Good politics or great politics?

This seems strange on many levels. There's the Nazi reenacting level. The Iott-isn't-going-to-win level. And the Eric Cantor-has-repudiated-Iott level, which is doubly interesting because Cantor could possibly challenge Boehner for speaker. I'd have assumed that Boehner would be spending the last weekend before the election stumping for candidates in closer races. Not sure what's going on here.

Maybe John Boehner is just smarter than all of us? Maybe he has made such a brilliant political move that none of us can comprehend it?

Let's look at the event info:

Calling all Iott Volunteers! Please join us for this very special pre-election rally with House Minority Leader, John Boehner. What a great way to start off our pre-election weekend. Please wear any Iott gear you may have!

In a statement to The Atlantic, Don Seymour from Boehner's staff says it's about the volunteers: "Leader Boehner will be rallying Republican volunteers at the Lucas County Victory Center to support the local Republican Party's get-out-the-vote efforts. Boehner has been on the road headlining rallies for Republican candidates in Ohio and across the country, and he'll continue his busy campaign schedule into the final weekend before Tuesday's referendum on Democrats' jobs-killing policies."

Job-killing policies to be replaced with Jew-killing policies. THEY MEAN PRETEND JEW-KILLING POLICIES. They will pretend to kill some Jews. Yeah, they will round them up and lead to them into gas chambers or whatever, but they'll just spray water on them. GOP 2010! [Atlantic]