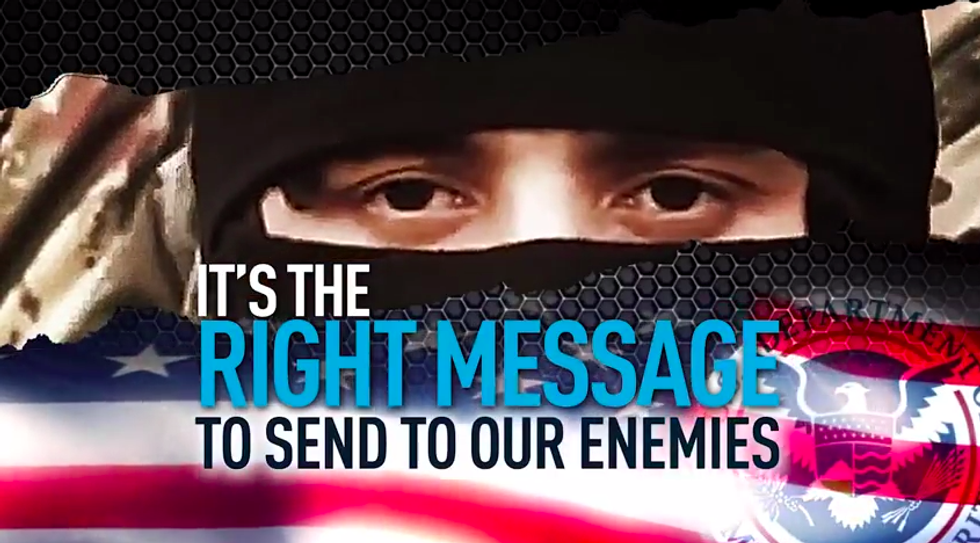 The civil war in the Republican Party is getting a lot uglier, which is excellent news if you enjoy watching Republicans try to eat each other's intestines with their bare hands, no utensils or a bib even. And yup, we sure do enjoy the hell out of that. Because Speaker John Boehner is terrible at his job, he only managed to get funding for the Department of Homeland Security extended for one whole whoppin' week, setting himself up for another week of the extremists in his caucus batting him around like a cat with a half-dead rodent.

But Boehner isn't blaming the Democrats anymore for his epic failure as a leader, since they're the ones who bailed him out of trouble last Friday just before midnight, and did he even say thank you? Of course not, because he's a Republican and has very bad manners.

Now Boehner's turning on the obstructionists in his own party, with television ads and everything, and it is AWESOME:

While the threats grow, conservatives in Congress want to beef up our security, enhance cybersecurity, and put real teeth in immigration enforcement. It’s the right message to send to our enemies.

But some in Washington are willing to put our security at risk, by jeopardizing critical security funding. That’s the wrong message to send to our enemies.

With the ominous music and scary pictures of scary terrorists and totally unsubtle accusations of not caring about national security, you'd think this was an ad against a Democrat in the 2002 election. But it's not. This beauty, airing in three states and targeting Republican Rep. Huelskamp and his fellow Republican Reps. Jim Bridenstine and Jim Jordan, is paid for by the American Action Network, which is spending $400,000 this week to run television, radio, and digital ads against a whole bunch of conservatives, telling their constituents to demand a clean longer-than-one-week-DUH funding bill -- from Republicans.

Who is the American Action Network? Glad you asked. It's a nonprofit "action tank" (groan) aligned with John Boehner. How aligned? This aligned:

AAN is housed in the same office as the Congressional Leadership Fund, a super PAC associated with Boehner, and the two organizations share senior aides, including Brian O. Walsh, the president of both organizations, and Dan Conston, the spokesman for both.

Boehner spoke at a fundraiser for CLN earlier this summer and also headlined the organization’s inaugural event. The group’s website has posted links to numerous news stories that refer to the group as “Boehner’s” super PAC.

So really, these ads against his fellow conservatives could not be more Boehner-endorsed unless he appeared at the end saying, "I'm John Boehner, and I approved this message because I'm trying real hard not to look like an idiot by allowing our national security to be put at risk by my own damned party."

Boehner's super PAC has dozens of House Republicans on its shit list, though only three are lucky enough to star in TV ads. So far. But the "action tank" (seriously, GROAN) has big long-term plans for House members who don't fall in line to make Boehner look like he doesn't suck at his job, threatening to "spend millions of dollars to contact voters in the coming months." The group's executive director, Mike Shields, says the "center-right conservative organization" is running attack ads -- against conservatives! -- because it is "our job is to educate voters on issues that matter and this is one of the issues that’s very, very important."

While we are not in the habit of rooting for conservative lobbyists who want to spend millions of dollars advertising on behalf of the Republican congressional leadership agenda, we might be willing to make an exception in this case. After more than a decade of gagging on our own vomit while Republicans attack Democrats -- including veterans who've literally given their limbs in service to their country -- with ominous music and scary pictures of scary terrorists and totally unsubtle accusations of not caring about national security, it is delicious (and calorie free) to watch certain conservative factions of the the GOP give other conservative factions of the GOP the same treatment. Really, in this increasingly bloody war among Republicans, we don't even know who or what to root for at this point because fuck ALL these guys, they all deserve to lose. We'll just keep watching from the sidelines, Switzerland style, and hope by the time the war ends, Nancy Pelosi gets her gavel back.