John Kasich PAC Made An Anti-Cruz Ad With A Terrifying Nose Penis. That Is All. 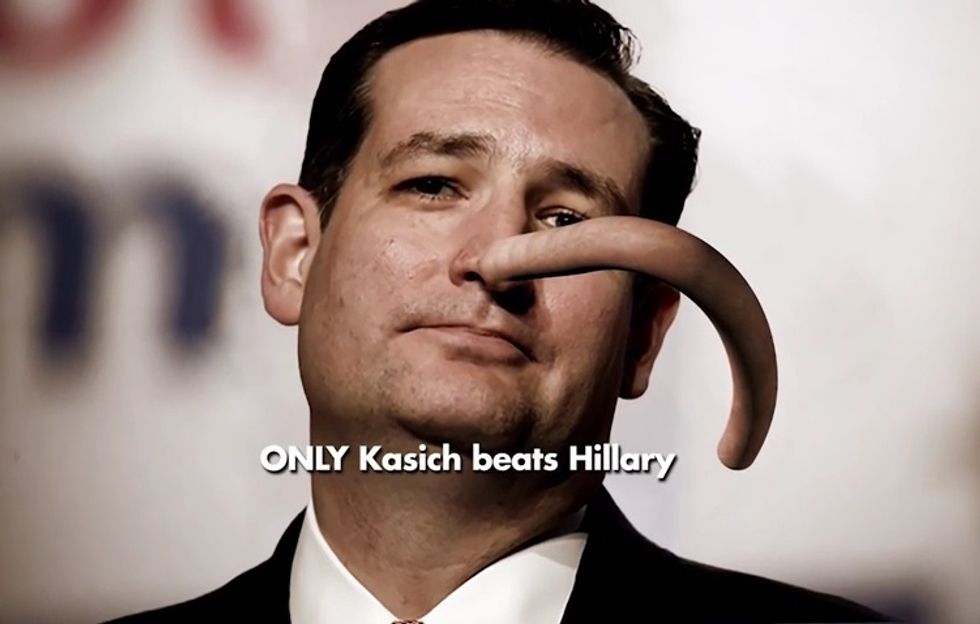 You might think that with a tag line like "Lyin' Ted," this horrifying ad would be the product of the Trump campaign, or a superPAC supporting Trump, but you would be wrong. Instead, the spot -- currently the top contender for 2016's Nightmare Fuel political ad of the year -- is the misbegotten brain abortion of New Day for America, a PAC supporting John Kasich. Not that you'd have any idea who you're supposed to vote for simply from the ad, which leaves you with more questions than answers, such as "Why, dear god in heaven, WHY?" or "Was this supposed to have been filmed in 3-D?" or "Is this a remarkably oblique and ultimately unsuccessful reference to Cruz eating that booger?"

We have no idea why the Kasich PAC thought anyone would be impressed by -- or even able to absorb any information from -- an ad whose visual imagery so completely overwhelms any of the oppo research mentioned in the script. All we can think of is, first, "Oh, looks like somebody with a graphics program thinks they're Terry Gilliam" and then "Oh, dear, that's nauseating" and then "Shit, why do I want a really cheap bratwurst now? I am disgusted with myself." We suppose the ad achieves one thing, however. It somehow manages to distract from the documented science fact that Ted Cruz has the most punchable face of any candidate in recent memory.

It's one of the few political ads we've ever thought could be improved by the inclusion of a demon sheep. And did anyone remember that goddamn thing was actually three minutes long?

Update: Alert Wonkette Operative "Sullivan St" notes that the Cruz Nose Abomination is actually the unholy work of Fred Davis, the genius who unleashed the Demon Sheep upon the world. The Book of Revelation prophesies that when Davis's next political ad is unsealed, a third of the stars will be cast from the sky and the seas will boil with blood. Or at the very least, people will stare at their computer monitors in shocked incomprehension.

Also released this week, this ad from the pro-Trump "Great America PAC," which is almost too earnest for words (Also, do you really want a PAC whose acronym is GAP?):

Like Homer Simpson listening to "A Prairie Home Companion," we want to shake our computer and tell it to be funny, dammit. Happily, now that the ad is out there, surely there'll be some fine parodies on the way to give the ad the hilarious payoff it deserves. Get to it, Internet! Let us know what you come up with, just as soon as we finish this awful bratwurst.