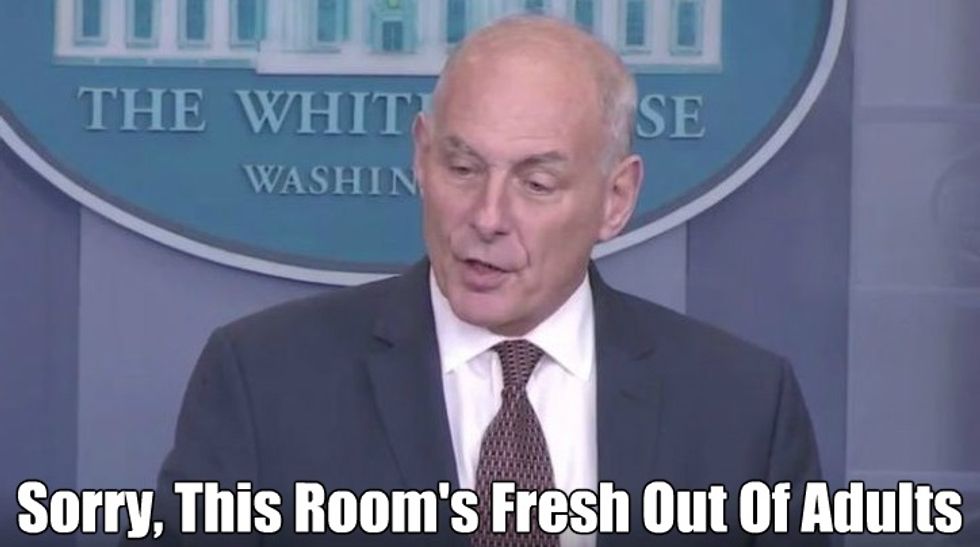 If Fox News doesn't set policy, then who does?

Remember how -- for about five minutes after he became Donald Trump's chief of staff -- people were talking about John Kelly being the adult in the room who would bring some order to the White House? He did manage to get Steve Bannon and Anthony Scaramucci out, and apparently tamped down on people just randomly walking into the Oval Office to hand Trump articles from WND or the Gateway Pundit, so good for him. But as we said from the first, John Kelly is not so much a good person as he is one more immigrant-hatin' wingnut who's simply a little cautious about letting Trump start a nuclear war for fun.

John Kelly Just Wondering Why We Couldn't 'Compromise' On Slavery

The 'adult in the room' believes some pretty childish things about history.

And now that the indictment shit is hitting the Trump administration fan, it's Kelly's job to get out there and provide some distractions, like renewing his fight with a gold star family and saying ignorant nonsense about the very fine people who held slaves. In the same interview with Laura Ingraham on Fox Monday, Kelly also called for a special counsel -- ideally Sean Hannity -- to investigate the many crimes of Hillary Clinton and the Democrats, because apparently Republicans spent so much time investigating Benghazi that they completely forgot to re-investigate how Hillary Clinton didn't actually sell any uranium to Russia.

After explaining that, outside of Washington DC, nobody in the "hinterlands" really cares whether Donald Trump's campaign had some help from Russia in the 2016 election, heck no, because they're just regular folks, Kelly went on to say that boy, oh, boy, the common folk of America sure are burning with desire to know the truth about an obscure regulatory move to allow Russian ownership of a Canadian company that mined uranium in the USA and isn't allowed to export it:

One of the strengths I have in looking at issues in my job, I think probably as a layman looking at this kind of thing, we need to find someone who’s very, very objective, who can get to the bottom of these accusations, I think it’s important. Again, the American people have an absolute right to know these things.

IT DOESN'T MATTER WHO PAID FOR THE FUCKING DOSSIER, YOU FUCKING ASSHOLES

It doesn't matter who paid for opposition research IF IT'S FUCKING TRUE, YOU IDIOTS.

Somewhere embedded in Ingraham's question was some speculation about the need to formally investigate the DNC's involvement in paying for The Dossier; Kelly didn't specifically comment on that but included it in his general "Yeah" on the idea of a new special counsel.

So let's get our priorities straight here, America: The involvement of a foreign government in attempts to hack our freaking presidential election is mere gossip for Washington insiders, and nothing (apart from some indictments) will come of it, but boy howdy, we sure need to launch an extensive investigation into how Hillary Clinton used her Mind Control Powers to make eight other government agencies approve the sale of that Canadian mining company to Russia. (State was one of the departments that signed off on the deal, but there's no evidence the matter ever reached Clinton's level.) Then she also probably threatened the heads of those agencies with her Death Squads so they'd say, repeatedly, that neither she nor anyone at State ever contacted them about the matter. These are the things Real Americans want investigated, because Sean Hannity keeps screaming about them.

Oh, and how's this for a coincidence? Shortly before the indictments against Paul Manafort and Rick Gates came down, as Fox News was ramping up its coverage of the debunked Hillary-Uranium story, Russian-linked bots on Twitter went crazy with links to the uranium story and with calls for Robert Mueller to be fired. Imagine that.

Also, Roger Stone wants Trump to appoint Fox News bloviator Andrew Napolitano to be the special prosecutor in the case, apparently because Fox Mulder and Dana Scully told Stone to go fuck himself.

In return for your pain in even thinking about that last sentence, here is a picture of Pinkie Pie and Fluttershy playing X-Files, by Friend of Wonkette Pixelkitties:

It's an autograph card for Andrea Libman, who does both voices.

Yr Wonkette is supported by reader donations. Please click here to send us money so we can continue to make fun of Roger Goddamned Stone.