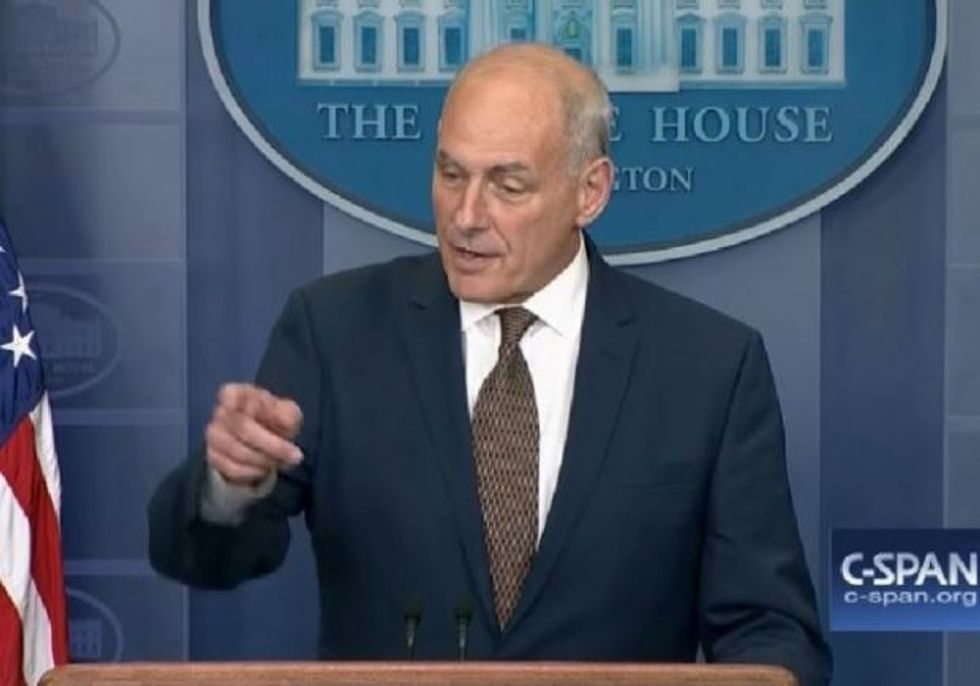 GO AWAY, 'GROWN-UP' 'DIOT IN THE ROOM

Intrepid journalists continue to deliver the goods about the great saga of the White House accepting the resignation of high-level staffer and Hope Hicks boyfriend Rob Porter after news of his constant wife-beating went public.

The latest news is that John Kelly knew about the allegations against Porter for-e-ver (since last fall!), and apparently so did White House counsel Don McGahn (found out a year ago!). This is totally normal because, on top of how these jokers wanted to keep a wife-beater on staff, this means Rob Porter has been working this whole time without a real grown-up security clearance, because he couldn't get one due to what his ex-wives had told the FBI about him. To be clear, the White House staff secretary sees everything the president sees, so this is not normal, but then again, nothing in this White House is normal and if Jared still can't get a full security clearance, who needs one?

In January 2017, when McGahn learned of the allegations, he wanted Porter to stay put because he saw the Harvard Law-trained Capitol Hill veteran as a steadying, professional voice in the White House, according to people familiar with the matter. His view didn’t change in June, when the FBI flagged some of its findings to the White House. Nor did he act in September, when he learned the domestic violence claims were delaying Porter’s security clearance, or in November, when Porter’s former girlfriend contacted him about the allegations, according to these people.

He might have been a wife-beater, but he was the CALMING PRESENCE kind of wife-beater. So they just kept handing him classified information and figured maybe one day he'll get a clearance. (He wouldn't get one.)

According to the White House, John Kelly and Don McGahn feel very betrayed right now, because Rob Porter "misled" them about how much he used to beat all his wives. Indeed, Kelly was "shocked" when he realized that "Rob Porter beat his ex-wives" literally meant "Rob Porter beat his ex-wives." He still thinks Porter is pretty swell, though, wife-beating aside. McGahn was just surprised that young dashing Rob Porter even had ex-wives, like is he even old enough to get married?

WaPo says another woman who works at the White House, who used to date Rob Porter, told McGahn this fall they should look into Porter's constant wife-beating, because she was worried about Hope Hicks, who is now dating Rob Porter. (Jesus, this wife-beater is blazing a trail through the West Wing, isn't he? Also, glad SOMEBODY is looking out for Hope.)

Well, this has all made Donald Trump VERY MAD, according to Gabe Sherman at Vanity Fair. He likes Rob Porter! He didn't know Rob Porter was a wife-beater! Nobody showed him the bad domestic violence pictures until Ivanka came into his office and said, "Daddy LOOK." Trump didn't know Rob Porter didn't have a real security clearance! Rob Porter sneaks him a third scoop of ice cream sometimes! Also he didn't even know Rob and Hope were going steady!

Nobody ever tells the president anything about who's fucking who and which of his staffers beats all the wives.

(By the way, if the president did not know about Porter's security clearance problems, that means he didn't waive the security clearance rules so his wife-beater could read all his classified information for him. That seems kind of bad?)

So, Trump is furious with John Kelly, and maybe will YOU'RE FIRED him. Meanwhile, Trump is also very mad at Hope Hicks, but she will not be YOU'RE FIRED, because she is a pretty lady and Trump loves her with his heart. But did you know that the first White House response, which said, "Nuh uh, Rob Porter isn't a wife-beater, he's actually very romantic," was partly crafted by Hicks, and she didn't get a sign-off from Trump? Naughty Hope Hicks!

(Also, according to Sherman, Hope Hicks still doesn't think the allegations against Porter are true. Obviously she is not reading Wonkette, which is telling her to RUN AWAY, HOPE! HOPE! RUN AWAY!)

On Thursday, White House Deputy Press Secretary Raj Shah addressed the allegations and Porter's resignation, explaining that Porter wasn't fired, except for yes he was fired, and that this White House doesn't like wife-beaters, oh boy heck no, and John Kelly only said all those nice things about Porter because he hadn't seen the pictures of Porter's victims AKA his ex-wives, but then he saw them on Wednesday, and he changed his mind about Porter. Except for WaPo says maybe Kelly still wanted to save the wife-beater after he saw the pictures:

On Thursday, amid the growing controversy, Shah said Porter cleaned out his desk that morning and would not be back. He also said Porter had been “terminated,” before later clarifying that he had resigned.

Shah said Kelly was not “fully aware” of the alleged spousal abuse until Wednesday, when he saw the pictures of Holderness with a black eye. But White House officials said Kelly pushed Porter to stay in the job even after the release of the photos.

Anyway, we're still curious why this scandal is just coming out this week, if everybody and their brother knew Rob Porter was a wife-beater and everybody in the White House knew he couldn't get a security clearance (except Trump, we guess, that fucking idiot). Still gonna go with "Ivanka Trump Special," because John Kelly is mean and doesn't let her into the Oval Office whenever she wants, and she wants to pick a new chief of staff for Daddy, like maybe somebody whose name rhymes with "Duhvanka" or something.

Of course, if they hid all this for a year, makes you wonder what other secrets the Trump White House is keeping.