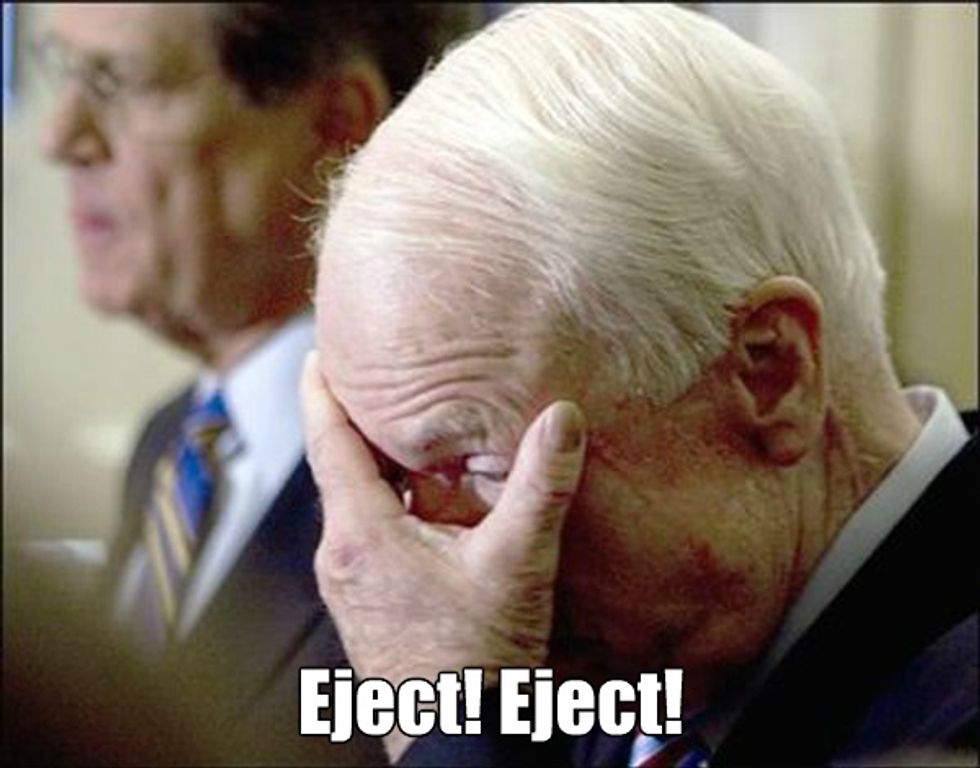 Another five and a half months, Alan!

John McCain ascended his sole remaining patch of moral high ground Wednesday to condemn Donald Trump's love of war crimes after Trump once again asserted the only reason America hasn't beaten ISIS is because we're held back by mere morality and international law, like a bunch of pussies.

Following the terror attacks in Istanbul, Trump again longed for a mythical golden age when America felt free to employ whatever tactics popped into the head of a sadistic adolescent boy:

"We have to fight so viciously and violently because we're dealing with violent people," Trump told supporters during a Tuesday night rally at the Ohio University Eastern Campus.

He also said, "we have to fight fire with fire," and "we better get smart ... and we better get tough -- or we are not going to have much of a country left.”

It was a fine old throwback to the halcyon days of March, when Trump first insisted that when he tortures people, it won't be a war crime anymore because we'll change all the laws to allow torture.

The Ohio University speech contrasted noticeably with a statement Trump's campaign had issued earlier in the day, when some wuss wrote a far less bloodthirsty comment that went out under Trump's name:

Our enemies are brutal and ruthless and will do anything to murder those who do not bend to their will ... We must take steps now to protect America from terrorists, and do everything in our power to improve our security to keep America safe.

It is unclear whether Trump had the staffer responsible beheaded or drowned in an iron cage.

Mr. Bolling has not volunteered to be waterboarded to demonstrate what a lark it is. We're not sure if that makes him a greater or lesser asshole than Sean Hannity, who in 2009 offered to let himself be waterboarded on live TV after being challenged by actor Charles Grodin. Yes, Charles Grodin. You takes your human rights champions where you finds 'em:

Grodin: Would you consent to be waterboarded? We can waterboard you?

Grodin: Are you busy on Sunday?

It's been over seven years since that offer, and Hannity is tired of being reminded of it, even though he remains an enthusiastic advocate of waterboarding.

McCain repeated his amusingly old-fashioned, non-winning, and well-informed opinion that not only is torture all illegal and stuff, but it also doesn't work:

According to [the] Geneva conventions, it's a war crime ... it doesn't work. Because if you inflict enough pain on someone that person will tell you whatever they think that you want to hear in order to make the pain stop.

McCain would know a thing or two about that; after days of torture when he was held captive in North Vietnam, he wrote out a confession, but deliberately included errors and communist buzzwords to make it plain he was writing under duress. He also gave false answers to questions, like naming players on the Green Bay Packers and saying they were members of his squadron.

As we're contractually obligated to mention, real military intelligence officers -- wimps to a man -- agree with McCain that torture is worthless for gathering intelligence. See also Matthew Alexander’s How To Break a Terrorist, in which the former Air Force interrogator details how he and other military intelligence officers used conventional interrogation methods to get information that led to the killing of al Qaeda in Iraq leader Abu Musab al-Zarqawi.

Trump, as we've noted previously, has never explained how waterboarding in itself would help win the fight against ISIS, considering that it is not actually a technique that can be used on a battlefield. No one even seems to have pointed out to him that ISIS uses torture and murder to keep captive populations in line, not as a method of fighting battles. Or that they torture for the sheer terror of it, not to ostensibly obtain actionable intelligence. Silly us -- that's why Trump thinks it's so neato. Obviously, if we'd simply ignore morality, our own laws, the military's code of conduct, and international law, we could win right away by being as brutal as ISIS, which would lead to peace and democracy breaking out in the Middle East. Or at least a dictatorship run by or friendly to us.

Now, Trump would like to tell you about this really cool torture he thought of where you'd make guys slide down a 20-foor razor blade into a bathtub full of lemon juice. That'd be so cool.