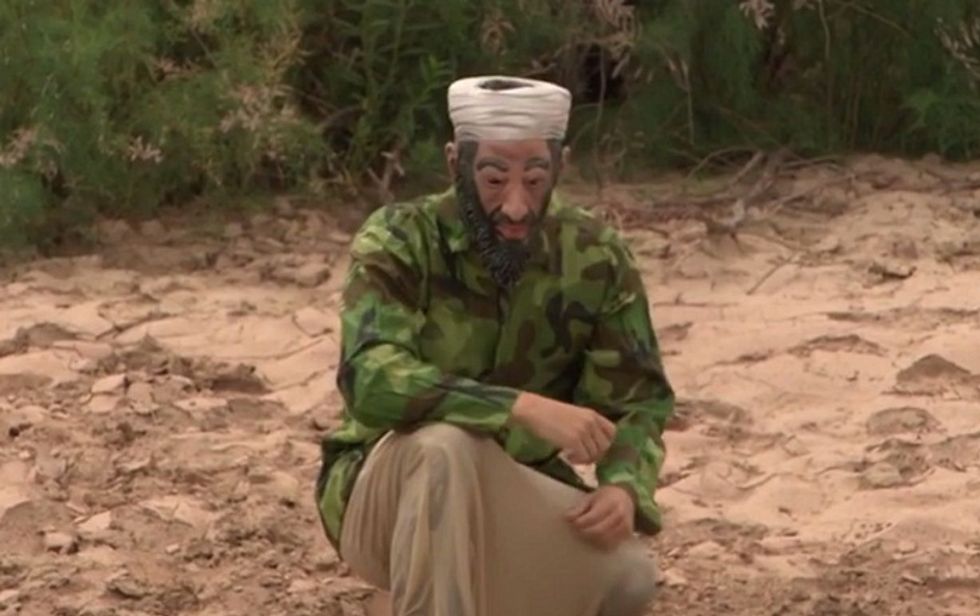 On Wednesday, the Senate’s Homeland Security Committee held hearings about possible terrorist infiltration of the nation’s southern border. This gave lifelike waxworks statue Sen. John McCain (R-Dang Fence) a chance to cite the spectacular work of “journalist” James O’Keefe in exposing the lack of security along a drainage ditch somewhere in the ass end of Texas. Or, as that area is known to everyone else, Texas.

You may recall O’Keefe’s amazing video from last month showing that a white guy could easily put on a rubber Osama bin Laden Halloween mask and wade into America from Mexico under cover of full daylight at high noon. Just like the terrorists would do it! Which led to this priceless exchange between McCain and Undersecretary for Homeland Security Francis Taylor, who must have sunk a knife into an artery in his leg under the witness table to keep from even cracking a smile.

TAYLOR: I’m satisfied that we have the intelligence and the capability at our border that would prevent that activity (terrorists crossing the border).

MCCAIN: Well you know it’s interesting because a American reporter named James O’Keefe dressed as Osama bin Laden walked across the border at the Rio Grande river undetected. Does something like that concern you?

Somehow Taylor managed to not reply, “No, reporters doing stunts for the camera to keep the wingnut welfare dollars flowing into their shady organizations because it beats having to get a real job do not concern me,” probably because he correctly figured it was easier to allow McCain to gurgle out whatever dumb thoughts were passing through what remains of his mind before his staff led him back to his office for his afternoon pudding cup.

TAYLOR: Actually sir, he was not undetected. He was known to the border security agencies who walked…saw him…

MCCAIN: Then why didn’t they stop him when he came across?

Oh we don’t know, Senator. Maybe because Border Patrol agents have bigger things to worry about than stopping James O’Keefe from filming his dumb student documentaries for the Rutgers film school? Because they were busy looking for actual illegal border crossers?

We’ll check back at the next Homeland Security Committee hearing, when McCain will be sure to ask Taylor why no one stopped O’Keefe from bringing a Zodiac boat full of radioactive poutine across our border with Canada.