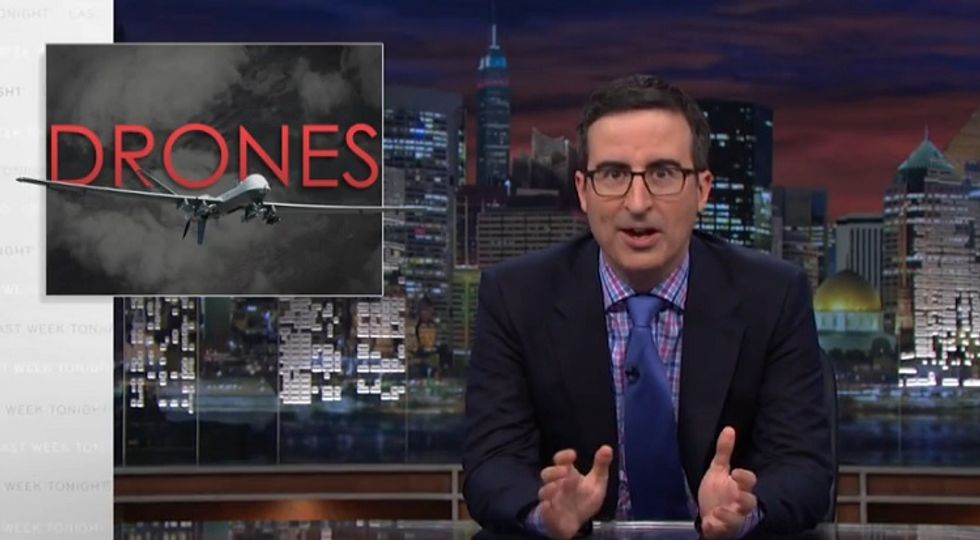 Now that he's done in-depth comedy reports onnuclear weapons and student debt, we're no longer surprised when John Oliver uses deadly serious subject matter. It can only be a matter of time before he gets to Ebola at this rate. But this week, Last Week Tonight took on a different lethal pathogen: American drone strikes, such as those that were launched against targets in Pakistan and Yemen, not that many of us heard about them. Oliver notes that, with eight times as many drone strikes under Obama than under G.W. Bush, "drone strikes will be as much a characteristic of the Obama presidency as Obamacare or receiving racist email forwards from distant relatives." And why not? Drone strikes are popular with the American public, because they're "appealingly cheap and incredibly deadly," which Oliver says could be drones' official slogan, "but unfortunately, that's already taken by Hardees."

As usual, there's a mix of one-liners, astonishingly in-depth research, and a weird sense that you shouldn't really find any of this nearly as entertaining as it is. Watch and enjoy, if that's the word.