John Oliver: Congratulations, You Get To Come To America. Or Not. (Video) 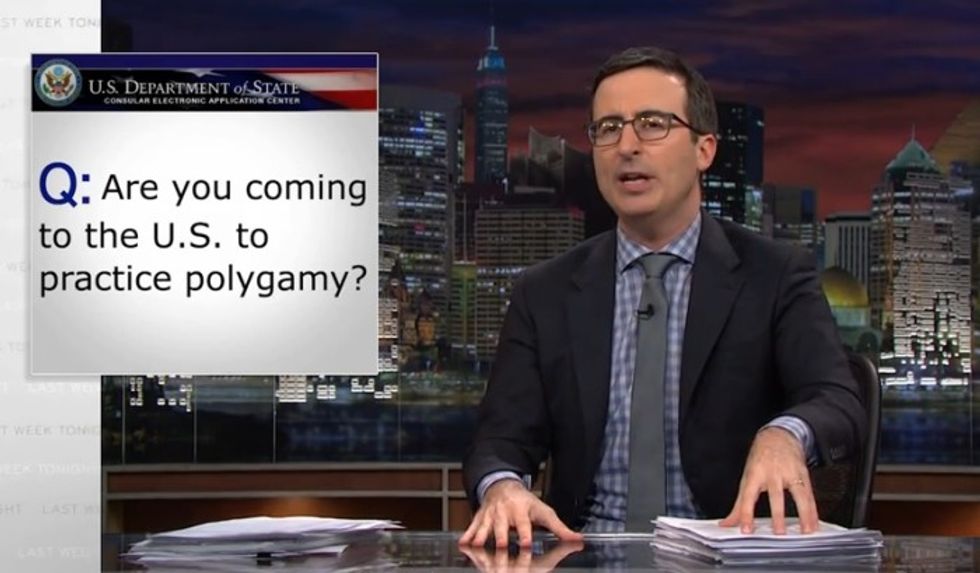 Update/followup: See end of post for a chance to do some good, or at least try to. After a week off, John Oliver is back in crusading investigative comedy mode again, as Last Week Tonight brings us this story on the paperwork nightmare faced by Iraqis and Afghans who worked with U.S. forces as translators. As we wind down our wars, thousands of people who bravely came forward to help our military with accurate translations -- because as Oliver points out, you really need to know whether that thing down the road is an IED or an IKEA -- are being left behind. Despite a law passed by Congress to expedite their entry to the U.S., allowing for for 1500 special visas a year, in 2011, the State Department actually processed 3. That's three, not a typo missing some zeroes.

To illustrate, Oliver shows us all the paperwork we're asking people in a war zone to fill out -- and too bad if you can't get a letter of recommendation from the American private contractor who left the country six months ago. Once every last bit of paperwork is in place, visas still get denied. Says Oliver, "The ghost of Franz Kafka is thinking, 'Don't you dare call this Kafkaesque! I don't want my name anywhere near this shit! Compared to this, waking up as a cockroach is normal.'"

And yes, there are security concerns, but as Oliver notes, at the end of the Vietnam War, the U.S. managed to resettle 140,000 refugees in only four months.

"We did it perfectly at the end of the Vietnam War," says Oliver, "And there is a sentence you don't often get to say out loud." For the sake of safety, we took all those refugees to Guam to process. Why not do it again? It's Guam, after all -- 200 square miles of palm trees and storage space."

Oliver points out just how high the stakes are. The translators waiting years for a visa are subject to their families being terrorized, kidnapped, or murdered. And to make matters worse, the program in Iraq has ended, and the one for Afghanistan will close at the end of the year. To help make the case, Oliver brings on one of the lucky translators who has made it to the USA, Mohammad, whose first name was officially changed by bureaucratic clusterfuck to "Fnu" -- some genius swapped in the acronym for "First Name Unknown" onto his forms. His family is still in hiding in Afghanistan.

It's infuriating and well worth watching. This is some pissed off comedy activism:

And for the sake of some non-rage-tinged laughs, you might rinse your brain with this bit of silliness about the Supreme Court's refusal to allow cameras in the courtroom. But they do release audio, so obviously, the answer is to provide reenactments with doggies. We like the Antonin Scalia bulldog, the chicken court reporter, and the big foofy poodle who stands in for Samuel Alito. And since the program has made available lots of b-roll footage of the animals, the YouTube community can now make its own reenactments of the entire Supreme Court term.

UPDATE: On the Twitters, translator Mohammad noticed our little mommyblog post, and wants you to know that he has started a petition to get his family out of Afghanistan. Good cause, y'all!