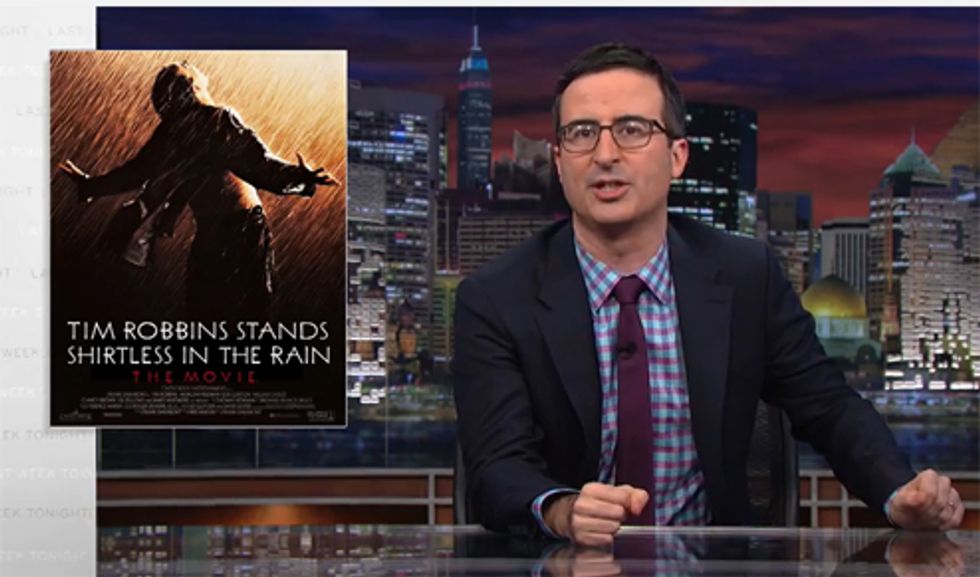 John Oliver'sLast Week Tonight keeps pushing the boundaries of what we expect in a fake comedy news show, tackling such not-immediately-hilarious topics as net neutrality, Uganda's anti-gay laws, and income inequality and producing segments that are both genuinely informative and funny. This week, he turns to the moral outrage that is America's prison system, and notices that while it makes for good TV, from Orange is the New Black to MSNBC's entire weekend programming schedule, to the TNT classic, Tim Robbins Stands Shirtless in the Rain: The Movie, we also don't like having to think about the realities of prison all that much. And yet there are some fairly disturbing things about the number of Americans in prison -- little things, like the fact that America has more people in prison than China, which he notes is the only thing we have more of than China outside of "debt to China."

And once again, Oliver and company pull it off -- building on his Daily Show chops, this is both solid comedy and pretty thorough reporting on something most of us know nothing about (or would rather know nothing about). The segment covers everything from prison rape -- the one kind of sexual assault that entertainment is perfectly comfortable making jokes about -- to the joys of privatization, including maggoty prison food. The footage of Sen. Al Franken trying to get a straight answer about the standard size of a solitary confinement cell from Federal Bureau of Prisons Director Charles Samuels is jaw-dropping -- Samuels keeps re-stating and trying to get his head around the simple question so much that Franken himself wonders if there's a problem:

"The dimensions in feet and inches. The size of the cell the person is kept in. I want to get some idea of... I don't know, am I asking this wrong?"

It's astonishing, and the sort of thing that the Daily Show might use, but would probably make the focus of a short segment. On HBO, it's just one part of a much longer piece, and that's the beauty of what John Oliver is up to -- if the Daily Show is a comedy riff on evening news programs, Last Week Tonight seems to be morphing into a showcase for longform comedy reporting. We'd say it was the 60 Minutes of fake news, but it's only 30 minutes, and you'd also have to remember quite a ways back to when 60 Minutes was still good.