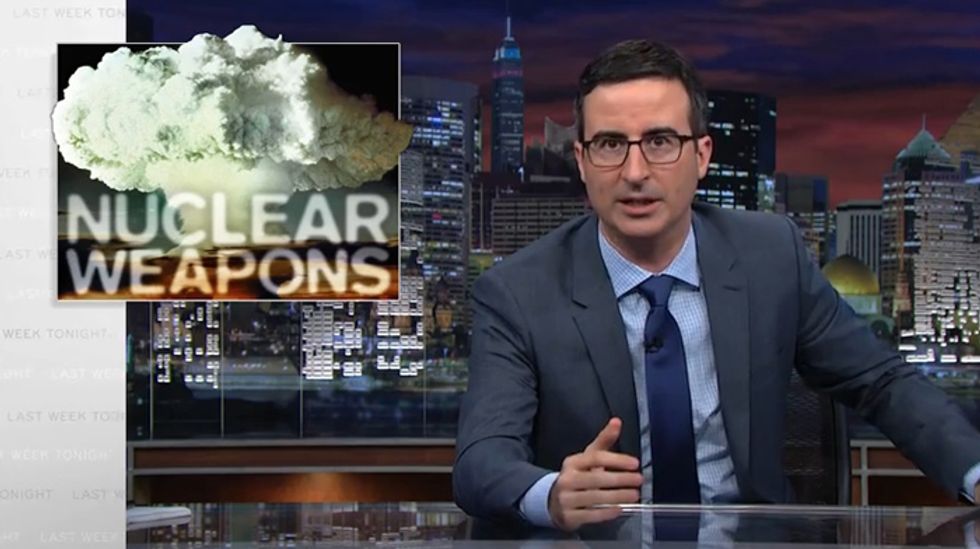 A lot of us grew up with a fair certainty that one of these days there'd be a nuclear war -- and Ronald Reagan helped turn the dial up to eleven before Nigel Tufnel ever picked up a guitar. But today, we haven't had those highly effective "duck-and-cover" drills in ages, and who gives any thought to nuclear weapons? And that's the problem, says John Oliver in this clip from Sunday'sLast Week Tonight: we've cut our nuclear stockpile way down from Cold War levels, but we still have enough nukes -- just the U.S., never mind the Rooskies -- to "not only destroy Earth, but provide 4th of July fireworks for Martians.”

And then we get to the fun stuff, some of which Yr Wonkette has already covered but which Oliver brings together in one big critical mass of "Oh Shit, REALLY?" For one thing, there are the nuclear missiles, which are in great shape but are in silos controlled by computers that operate on 8-inch floppy disks.* You know, the ones that were replaced by the more efficient 5-inch floppies that you used to boot up your PC clone to the DOS prompt, back when "PC clone" and "DOS prompt" meant something. And then there's all the failed "readiness" tests at missile bases. And the cheating -- by text messages -- by completely different missile crews. And the little oopsies where we accidentally dropped nuclear bombs out of B-52s on North Carolina. Not to mention the antics of the Air Force's top general in charge of the missile program, Michael Carey, whose incoherent, drunken toasts during a trip to Moscow embarrassed his Russian hosts. “Just think about that,” says Oliver. “The man overseeing our ICBMs was too drunk for the Russians. The Russians.”

*We are informed by Alert Wonkette Operative JonRFleming that there is no such thing as a 10-inch floppy. Wonkette regrets the error. Someone was lying about a couple inches, obviously.

Also, because it is there, we proudly bring you this piece about sex-having Russian geckos that are Lost in Space. We doubt Lasse Halström is going to make a poignant coming-of-age indie movie about this story.  Oliver is trying to get people to troll Russia on social media to #GoGetThoseGeckos, and who are we to resist a trend?