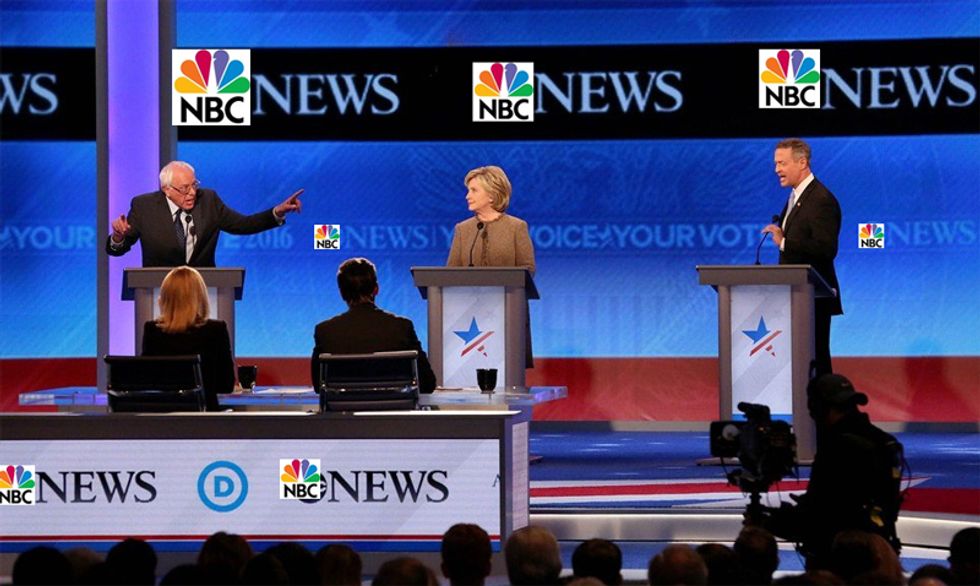 Nah, it hardly looks shopped at all. Nobody will notice.

Are you all ready for another of the most important televised debates of the 2016 election? It should be sometime in the spring, we think. In the meantime, here's this sad bit of holiday-weekend programming that both Bernie Sanders and Martin O'Malley have been pointing at for months as Exhibit A in the case that the DNC has been trying to keep their campaigns from getting any attention. Sure, half the country is watching the don't forget to insert team name and the insert other team name in the f'ball playoffs. But come Monday, or Tuesday, or whenever people go back to work, we happy few, we band of Wonkers, can proudly say, "I watched the fourth Democratic Debate this weekend," and people will look at us and ask, "Oh, was that on? Huh." But we can feel quietly superior for our dedication to the grand pageant of American Democracy, now can't we?

And by god, we can be proud that nobody at this debate will be pledging to exclude Muslims from America, or bickering over who can most effectively convert Middle Eastern people into radioactive dust, or competing to scare the snot out of us. So let us be glad, and preview this debate in the time honored Question and Answer format that has served us so well in the past:

What time is the debate?

It starts at 9:00 p.m. Eastern, which is 6:00 p.m. Pacific and other times elsewhere. They are already talking on MSNBC, too, if you feel the need to see more Chuck Todd (what is wrong with you?).

Where is the debate?

It's on the talking-picture box on the NBC television network, check local listings blah blah blah. The debate itself will take place in Charleston, South Carolina, at the Gaillard Center, which is right near the Emanuel AME Church. Don't be looking for anyone to be claiming that guns save lives.

I don't do TV. Will this thing be livestreamed?

Don't you get all superior with us, little miss or mister. TV is good for you. But the debate will indeed be livestreamed on NBCNews.com and also on NBC's YouTube channel. That would also be the link for weirdos who want to see every last scrap of spin room antics. Maybe Martin O'Malley will sing!

Are there other ways to watch the debate?

If you have a fancy la-dee-dah mobile device and are into that sort of thing, NBC lists a whole bunch of other apps and links and chingaderas for watching it.

Get a life, or go to the tweetorrent and use #DemDebate.

Is this Martin O'Malley's last chance?

That train sailed a long time ago, baby, and you there's no getting it back in the toothpaste tube.

Did you see the new Michael Bay movie, Transformers Do Benghazi, yet?

It was so very, very loud. Review coming soon.

Will Wonkette be liveblogging the debate?

Sadly, we will not, because did you notice that part about how the Dem debates keep getting scheduled on holiday weekend nights? But Yr Dok Zoom will be right there in the comments with you all, riffing along like we're all in the front row of Mystery Science Theater 3000. This time, though, our GF is unable to bring us Chinese takeout and Kid Zoom is resentfully looking at the teevee because he has "one more mission" he has to do in Fallout 4.

Could Dogmeat's AI in Fallout 4 actually be any worse?

No one at Bethesda cares, and they have stopped taking our calls.

Who'll be singing the National Anthem?

Did they even sing it at the last one? We honestly don't remember. Do Democrats even do that? They hate America, don't they? Maybe Debbie Wasserman Schultz will sing it. Hahaha, like she'll even be there.

You're just going to quit halfway through and watch Jessica Jones on Netflix, aren't you?

Could be. If we start yelling "O'Malley's been Kilgraved!" you'll know.