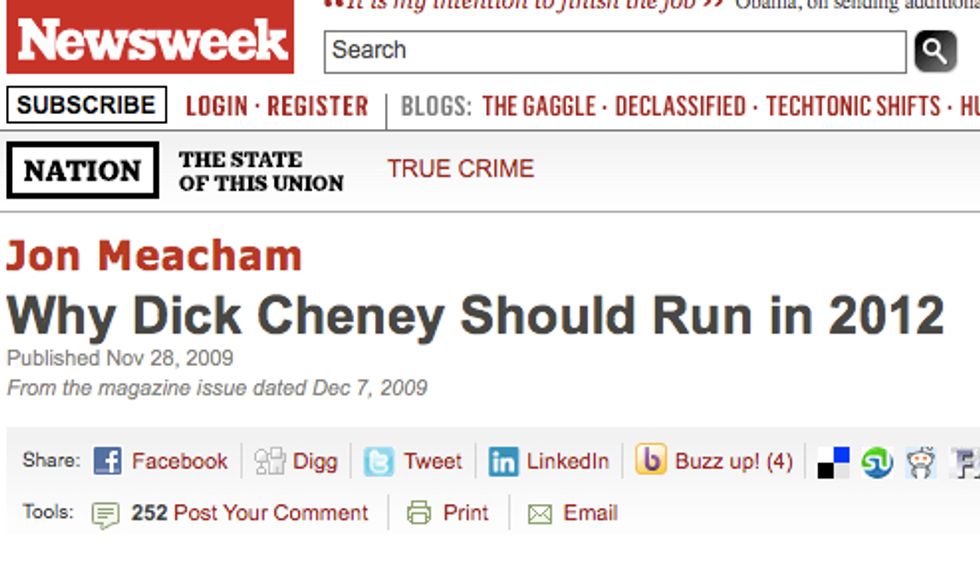 Newsweek has plenty of talented reporters trying to write about real stuff, so it's a shame that their editor has decided yet again to poop all over his magazine: "But I think we should be taking the possibility of a Dick Cheney bid for the Republican presidential nomination in 2012 more seriously, for a run would be good for the Republicans and good for the country. (The sound you just heard in the background was liberal readers spitting out their lattes.)" No that was the sound of bloggers pressing SHIFT + CONTROL + COMMAND + 4 on their liberal Apple computers to take screen grabs, for mockery. But ha ha yes they do like lattes which is why they are so dumb.

A contest between Dick Cheney and Barack Obama would offer us a bracing referendum on competing visions... A Cheney victory would mean that America preferred a vigorous unilateralism to President Obama’s unapologetic multilateralism, and vice versa.

Perhaps the only person who loves "vigorous unilateralism" (WAR!!) more than Dick Cheney is John "Walnuts" McCain, who famously lost everything in comical fashion one year ago.

Cheney/Santelli '12, is what we're trying to say.