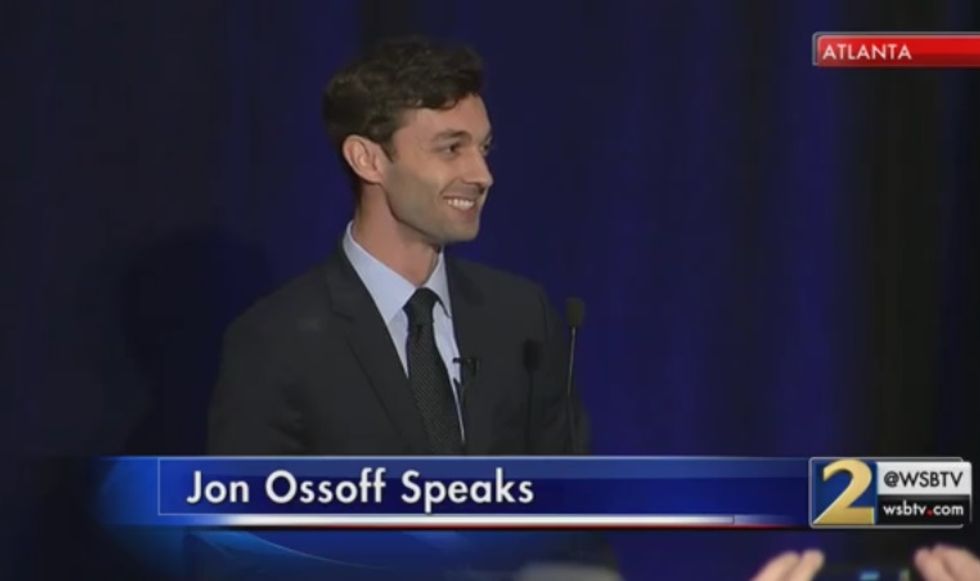 And now it's time to get to work

Democrat Jon Ossoff fell just short of an outright win in the primary election for Georgia's 6th Congressional District last night, getting 48.1 percent of the vote in an 18-candidate open primary to replace Tom Price after Price was chosen by Donald Trump to ruin American healthcare. The closest Republican candidate -- of eleven Rs in the race -- was Karen Handel, who got 19.8 percent. Since Ossoff didn't get 50 percent, he and Handel will face each other in a run-off election June 20. Donald Trump was simply over the moon at the election results, taking credit for a Republican "win" in the race that won't be settled for two months:

In Trumpian math, a 28.6 point win over the closest Republican is actually a loss. Or maybe Trump simply assumes Handel will now automatically win in June since she won't be running against any other Republicans. Not mentioned by Trump: Handel ran as an establishment-type Republican, distancing herself from Trump policies whenever possible, while the Republicans who most closely allied themselves with Trump didn't win cacadoody:

Bob Gray made allegiance to Donald Trump the cornerstone of his campaign, and he may have suffered for it. He got about 10 percent of the vote and came under a barrage of criticism over his pro-Trump bona fides.

And Bruce LeVell, head of Trump’s diversity coalition, got less than 1 percent of the vote. He also put Trump at the center of his campaign, and even made a last-minute trek to the White House to visit with the president, who didn’t endorse any candidate in the race.

Ossoff's numbers looked great in the early going, which ultimately wasn't enough to keep him over 50 percent; for all you Wonkers who were absolutely sure in the comments that the fix was in, it's worth remembering that the earliest returns skewed Ossoff's way since they were from early voting and absentee ballots, which tend to favor Democrats, so stop your grumping about tampering with the vote, OK? Makes us sound like Trump, and we don't want to sound like Trump, ever. As the stats freaks at FiveThirtyEight point out, it's pretty much the same pattern as in last year's general election nationwide:

Hillary Clinton cleaned up among early voters in key swing states that she nevertheless went on to lose. The fact remains that a vote cast on election day is worth the same as a vote cast early. So add the Georgia 6 Round 1 results to our ever-growing pile of reasons to take early vote results with a salt mine’s worth of salt. It’s not predictive.

Instead, let's focus on the fact that Ossoff pulled off a first-place finish in a very red district where he wasn't supposed to have much of a chance, and instead, he was far ahead of the closest Republican. Yes, Handel is going to have a much better chance in a two-way race, but Ossoff is still going to benefit from lots of support and money from national Democrats. And Handel is going to be saddled with the enthusiastic support of Donald Trump, who simply won't be able to keep himself from loudly supporting her; in suburban Atlanta, that may turn out to be more helpful for Ossoff. And Crom only knows what sort of madness Trump will manage in his next two months in office. Again, FiveThirtyEight's Harry Enten offers some statistical solace about the political shifts in this district:

Clinton had already greatly improved on previous Democrats’ performance in Georgia 6. She lost to Trump there by only 1.5 percentage points. Former President Barack Obama lost the district by 23 points in 2012, as did Democratic congressional candidate Rodney Stooksbury in 2016.

Nothing's guaranteed, and it's going to be a tough fight with all the money that will now be going to Handel, but Ossoff is the guy people are enthusiastic about. An outright win would have been best, sure, but until last week, nobody was even dreaming of that. The conventional wisdom was that he'd pull off an exciting first-place win in the low to mid forties, and he did even better than that. Jon Ossoff would have liked a win. With the votes still being tallied, he was pretty sure last night was no loss:

There is no doubt that this is already a remarkable victory for the ages. No matter what the outcome is tonight, whether we take it all or whether we fight on, we have defied the odds, we have shattered expectations, we are changing the world [...] we will be ready to fight on and win in June if it is necessary. And there is no amount of dark-money, superPAC negative advertising that can overcome real grass-roots energy like this. So bring it on.

Doesn't sound like a guy who's discouraged one bit. Time to get to work, yes?

Yr Wonkette is supported by contributions from readers. Click that "Donate" linky down there, will you?