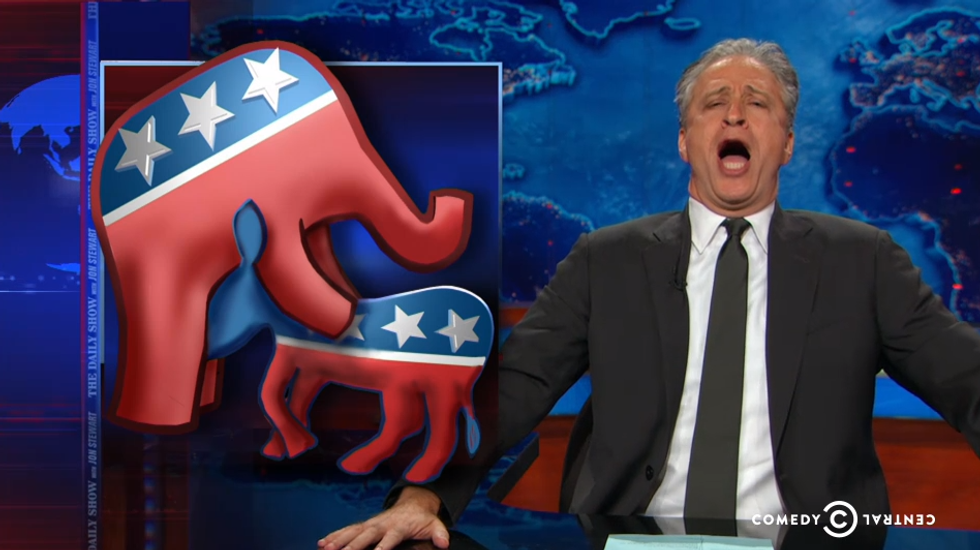 On Wednesday's Daily Show, Jon Stewart says he didn't have a chance to watch the results of Tuesday's election (we're not entirely sure we believe him; that may be one of those sarcasm satire jokey things), but according to the show's montage of reports from all your favorite new channels, the night was a "tectonic skullfucking."

The Blue Man Group? Now the Red Man Group, having lost two of three men. Children will now learn valuable life lessons from Red’s Clues. The only territory Democrats retained is that painful sexual frustration will still be known as blue balls. ...

Look, the Republicans have the Senate, and governorships, and everything else. I imagine the first order of business is rightward ho.

Then we have one of those quintessential montages of all the newly elected and re-elected Republicans claiming that now they can support bipartisanship and work together, including Kentucky Sen. Mitch McConnell claiming, at his Tuesday night victory speech, that “just because we have a two-party system doesn’t mean we have to be in perpetual conflict.”

To which Stewart replies:

Who the fuck are you people? I gotta tell you. That sound dbyte probably would have been better not coming from the guy who for six years has been one of the sole owners and operators of this country’s perpetual conflictonators.

It won't change what happened, but it will make you laugh. Watch and enjoy!