Jon Stewart Literally Eviscerates The Koch Brothers, Through A Window 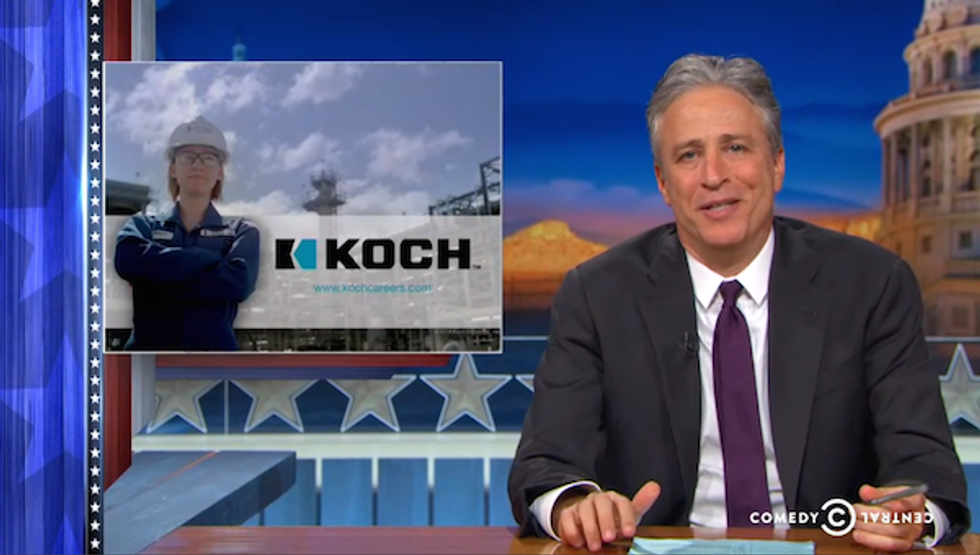 The Daily Show has a new advertiser, and it is Koch Industries, owned by those "lovable scamps" Charles and David. Jon Stewart graciously and very sincerely welcomes the new sponsor, who is simply trying to appeal to Stewart’s "not yet dying" audience. And how does he describe Koch's charming ad about how heartland American the company is?

Wow, that’s the kind of an ad that a company usually makes when it turns out a byproduct of their manufacturing process is giving young pubescent males talking nipples.

Stewart then covers some of the information Koch, for some reason, left out of its ad. Like how many hundreds of millions of dark money dollars the Koch brothers pour into the political process to try to remake America in their preferred image.

So now we know that the Koch brothers are pouring an unending waterfall of money through a cleverly masked network of unaccountable organizations to pedal electoral influence, the ad sounds less inspiring.

Stewart's team made some “minor adjustments” to the company’s ad, including some of those minor details Koch didn't want to advertise. Go watch the whole thing. It's great.