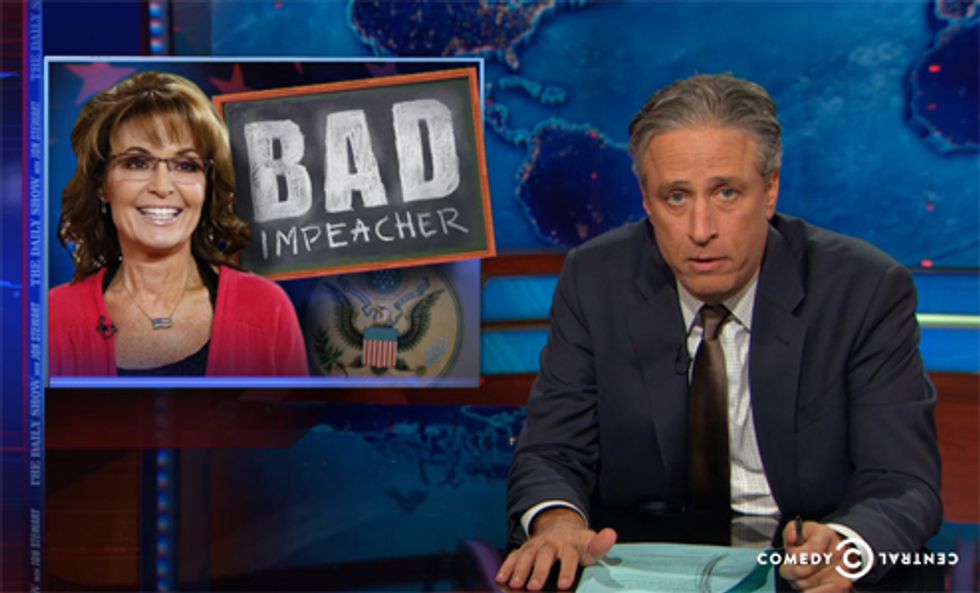 Having just come off his break, Jon Stewart is still catching up with some stuff that we've already covered, like f'rinstance Sarah Palin's bigLet's Impeach Obama announcement from a week or so back. He handily disposes of her nutty comparison of America to "the battered wife" who finally says "No mas," pointing out that now that she's

"finally finished with mangling the English language, and has moved on to making Spanish incomprehensible. She's like a serial killer of language."

(And now, a "read more" link that takes you to the rest of the story on Wonkette, and man does THAT feel weird.)

But even "people who didn't quit their elective offices mid-term" have been calling for impeachment, like ninety-squillion Republicans in the House, who have made something of a career of calling Barack Obama the very embodiment of tyranny and totally being King George II and Hitler wrapped up in a Benedict Arnold torte. And yet for all the talk of impeachment, there's precious little will to actually impeach the Tyrant, much less tar and feather him, because it might not bode well for the midterms. Stewart thinks maybe he sees through that little game:

When your main concern when you’re deposing a tyrant is how it will affect your party’s chances in the upcoming midterm elections, that’s not tyranny.

And so instead of impeachment, there's always a "more fundamentally American" way of dealing with the Kenyan Usurper: sue him (Bonus points if you get the Brady Bunch reference in there). Just like the Founders envisioned..."when they were tripping on mushrooms."