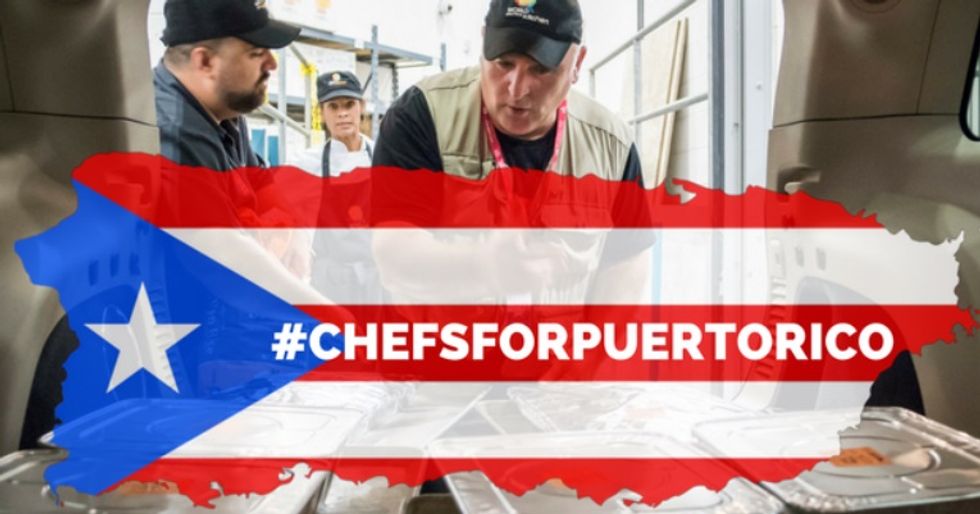 Chef José Andrés usually spends most of his time running more than a dozen fancy restaurants in the Washington DC area, but he's been busy lately with a much bigger undertaking: Getting hot food to as many people in Puerto Rico as he possibly can. The Washington Post has a very Nice Times profile of Andrés and his plan to feed people on the island as long as it takes them to get their own kitchens up and working again. While Donald Trump has been a big jerk about how ungrateful the people of Puerto Rico have been for Trump's efforts at doing very little, chef Andrés has been joining forces with local restaurateurs to get cooking. It would be nice if FEMA were doing a better job, but when the federal government decided Puerto Rico was surrounded by too much water to help, Andrés and others have helped pick up some of the slack. Under a normal president, that wouldn't be as necessary, but thank Demeter there are folks like Andrés and his nonprofit, World Central Kitchen.

Andrés has been in Puerto Rico since September 25, minus a few nights at home after he got dehydrated. His first move was to team up with San Juan chef José Enrique, who was already preparing food for residents, cooking up a local beef stew for as many as he could. Together, they were able to feed between a thousand and two thousand people daily at first, but then things got rolling and after a week they were serving up to "25,000 meals per day, now including sandwiches and paella."

As of Tuesday, Andrés and a coalition of #ChefsForPuertoRico cooks across the island have managed to serve a million meals, which is nearly double the 540,000 meals served up by the Red Cross (though Red Cross has also been delivering relief supplies, about 534,000 shipments). The million meals served by World Central Kitchen make up a sizeable chunk of those distributed by FEMA -- more than 14 million meals in total, plus 11 million liters of water across the island, which includes both FEMA supplies and meals donated by charities and other organizations. Unlike the heat-n-eat MREs delivered by FEMA, World Central Kitchen is serving up hot food made from fresh ingredients.

After partnering with chef Enrique, Andrés started expanding, first to facilities in San Juan's sports coliseum, which now serves over 60,000 meals a day, then to another 14 restaurants and kitchens around the island, with 400 to 500 volunteers working daily to get food out to the people. Andrés and crew have also flown in food to supply a kitchen now serving meals on the island of Vieques, which was the first part of Puerto Rico hit by Hurricane Maria and which had been in awful shape at the end of September.

We are launching a #ChefsForPuertoRico kitchen in Vieques with Chef Evita!! @WCKitchen brought two planes full of food to the island! pic.twitter.com/8kR0INLUec

There had been some tension between FEMA and World Central Kitchen after an initial contract ended; FEMA offered a second contract to serve just 20,000 meals, but Andrés wanted to go bigger, with a contract for 120,000 meals. Government contracting rules would have required a contract that large to be put up for competitive bidding, and Andrés made a fuss in the media about bureaucratic inefficiency getting in the way of helping people. He's now backed off from comments he'd made about FEMA treating him like a "puppet" for the sake of making it look like they were helping, but he's still annoyed by the inflexibility of a bureaucracy during a crisis:

“You know me, nobody holds me back. But at the same time, you have to be strategic,” Andrés said. He understands that FEMA employees have to abide by the rules and the thresholds established by people higher up in the agency. But he would still like to see more flexibility from the agency, particular during times of crisis.

And FEMA is still looking at a new contract with WCK for the more modest amounts it can approve without competitive bidding. You might think a president who was paying attention would take some kind of action to allow more flexibility, huh?

The WaPo profile of Andrés had to go and close with the chef getting us all misty-eyed, with Andrés quoting Tom Joad: “Where there’s a fight so hungry people can eat, I will be there,” he said.

Andrés didn't go on to pledge that he'd be around whenever a cop's beatin' up a guy, but with that one line, he has the Steinbeckian basics right: We're all part of one big soul, and there's nothing better than the way kids laugh when they're hungry and they know supper's ready.

Yr Wonkette is supported by reader donations. Click here to help us keep bringing you Nice Times (and all the other stuff that makes you need Nice Times). If you want to send some bucks to World Central Kitchen, that would be darn nice, too!