Josh Duggar Told A Foster Kids' Group How Evil It Is To Abuse Kids. He Would Know. 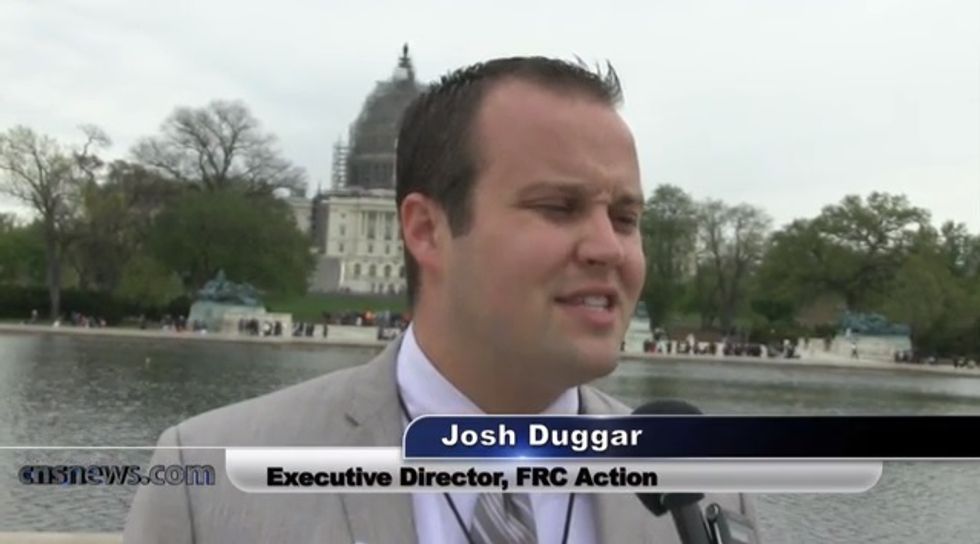 Josh Duggar spoke to a gala for the Christian Children's Home of Ohio (CCHO) on April 11 of this year, mere weeks before the nation learned about his firsthand experience with abusing kids:

Josh Duggar visited the Christian Children’s Home of Ohio in 2009. He said that visiting the children’s home was an eye-opening experience for him that made him realize what he was privileged to that the foster children were not.

As the guest speaker, Duggar stressed the importance of investing in working on behalf of abused, neglected, and suffering children. Josh Duggar quoted scripture while referencing his father and reality TV co-star, saying that Jim Bob Duggar spent his house savings on an unsuccessful political campaign. Josh pointed out that while the house savings was gone, the attention from his father’s campaign was ultimately responsible for the financial boost from the reality show. Josh Duggar told the crowd at the Christian Children’s Home of Ohio’s gala that in Romans 8:28, God says, “All things work together for good,” but clarified that the poor children the charity is said to help know well that not all things are good.

Know what's not good? Molesting your sisters is not good. Know what else is not good? Having parents who tried to cover that up, while Daddy was running for political office, and then continuing the cover up while the family grifted its way to riches and fame, and then using THAT platform to demonize LGBT people as child predators. Those things are not good.

Before the news of the molestation from his youth came out, Josh Duggar told the crowd at the Christian Children’s Home of Ohio’s Hope Gala that evil done to children is one of its worst forms.

CCHO has, of course, responded, saying that it is "disappointed," and reassuring us that "While we do not condone the actions reported so far, we believe there is healing available and we are praying for all those involved."

Yeah, really. Look, we know, from delving further and further into the Duggar family worldview, that the environment in which Josh Duggar grew up -- that patriarchal, sex-shaming, controlling, TRULY EVIL environment -- is partly to blame for what transpired. While Josh was clearly old enough to know right from wrong and be held accountable for his actions, we understand that, without the bugfuck insane Quiverfull homeschooling cult he grew up in, this all very well might not have happened. Maybe he's a true predator. Maybe he isn't. That's not for us to decide. But Jesus FUCK, the utter balls it takes to stand up as an advocate for abused, neglected kids, when abuse and neglect of kids is inherent to your entire worldview, and when you KNOW you have perpetuated some of that abuse and neglect, in your own family.

Sometimes people need to know when to sit their holier-than-thou asses DOWN.