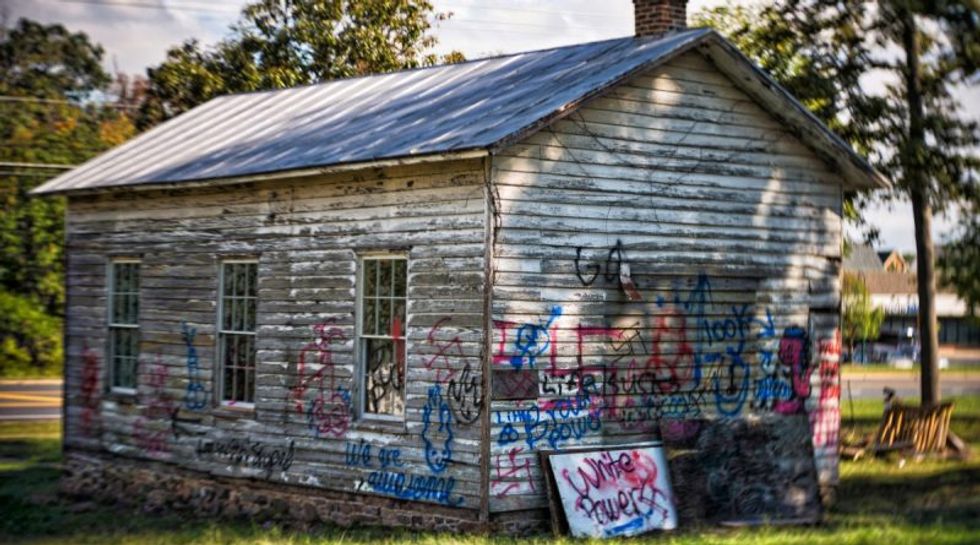 History -- who needs it?

In Loudoun County, Virginia, a local judge has given five teenagers who vandalized a historic black schoolhouse with racist graffiti last year a novel sentence -- and several nonfiction ones too. Rather than sending them to juvie or having them do some community service that amounts to busywork, Judge Avelina Jacob, following a suggestion by a prosecutor, is requiring the teens, aged 16 and 17, to read a book a month for the next 12 months and write a report on it. The catch is that they have to choose from a list of 35 books that all deal in one way or another with themes of oppression and hatred. Who knows whether it'll work, but it looks like Judge Jacob is attempting to sentence these young twerps to empathy.

Among the books on the list are Elie Wiesel's impressionistic memoir of surviving Auschwitz, Night; Maya Angelou's landmark book about growing up in the Jim Crow South, I Know Why the Caged Bird Sings; and Azar Nafisi's story of women reading banned Western literature in Iran, Reading Lolita in Tehran. In addition to the book reports, the teens will also be required to visit the Holocaust Museum in nearby Washington DC and the Smithsonian's Museum of American History’s exhibit on the Japanese-American internment camps during World War II.

In September, the teens had spray-painted racist and anti-Semitic graffiti on the Ashburn Colored School, a decaying one-room schoolhouse built in the 19th Century and used to educate black kids throughout Segregation; the teenagers were arrested in October and pleaded guilty to one count each of destruction of private property and one count of unlawful entry. Two of the kids are white and three are minorities; according to the New York Times, "At least one of the teenagers said he did not know the symbolism of a swastika." Sadly, we don't have any difficulty believing that -- we can believe a kid might know only that it's the thing you draw when you want the most offensive Fuck You possible.

The reading project was suggested to Judge Jacob by commonwealth attorney Alejandra Rueda, who told the Times how she came up with the idea:

“It occurred to me that the way these kids are going to learn about this stuff is if they read about it, more than anything,” Ms. Rueda said. “Yes, they could walk into court and plead guilty and get put on probation and do some community service, but it wasn’t really going to bring the message home.”

“I just thought maybe if they read these books, it will make an impression on them, and they will stand up for people who are being oppressed,” she added.

Ms. Rueda said she had been inspired by her own history growing up in Guadalajara, Mexico, in the 1980s, when her librarian mother handed her Leon Uris’s books Mila 18 and Exodus to learn about Israel and the Holocaust while she was participating in a model United Nations project.

So far, so good, we think, maybe, except that it strikes us as a lot easier to build empathy through reading if you're already A) inclined toward empathy and B) a reader (with a mom who's a librarian, for godssake). We're not sure empathy can be mandated, but we're rooting for Rueda and Jacob anyway. Beyond the book reports and the museum visits, the teenagers will be required to

write a paper about the impact swastikas and “white power” messages have on African-Americans and members of the broader community. The paper must include historical references such as Nazism, lynchings and discriminatory laws.

They must also listen to a recorded interview of Yvonne Neal, a Virginia woman who described her experiences as a student from 1938 to 1945 at the Ashburn Colored School, its official name in tax records.

Hell, we're starting to think maybe the prosecutor and the judge may want to go beyond doing that as a sentence for five delinquents, and see if the local school system would offer it as an elective course. It's a pretty good reading list, too, with a balance of fiction and nonfiction involving conflicts from South African apartheid (Cry, the Beloved Country) to the the rise of the Taliban in Afghanistan (The Kite Runner). If we were making the list ourselves, we'd trick the boogers into reading some literary comics, too, like Art Spiegelman's Maus and John Lewis's graphic memoir March, which only look like easy reads.

The old school building is owned by the Loudoun School for the Gifted, a private school where earnest kids probably devour good books and care about other people already, because liberal upper-middle-class values; the school hosted a community event in October to paint over the graffiti. The Loudoun School had begun a project in 2014 to stabilize and restore the old building, and news of the vandalism finally put the project's donations well over their funding goal, as awful things have a way of opening checkbooks.

Teachers at the Loudoun School helped Ms. Rueda develop the list of book choices for the vandals; we sympathize a bit with one English teacher who "balked at the idea of using literature as punishment" -- clearly someone who knows that in 1984 the National Council of Teachers of English adopted an official resolution condemning the assignment of writing as punishment. (Coincidentally, the Times ran a heck of a nice essay on that very topic around the same time.) We're not so sure we'd go so far as "balking" -- especially not if there were a runner in scoring position -- but we've got qualms. Is this really going to accomplish much beyond the judge and community feeling virtuous for pushing the vandals toward maybe giving a damn about others? It'll be interesting to check back in a year and see if any of the young offenders actually do gain anything beyond a rote "Dear Officer Krupke: I am very sorry and had no idea I had hurt people's feelings" sense of empathy from the experiment. We'd love to find our cynicism unfounded.

It may not turn them around. But it sure beats sending them down to volunteer at Trump campaign headquarters.