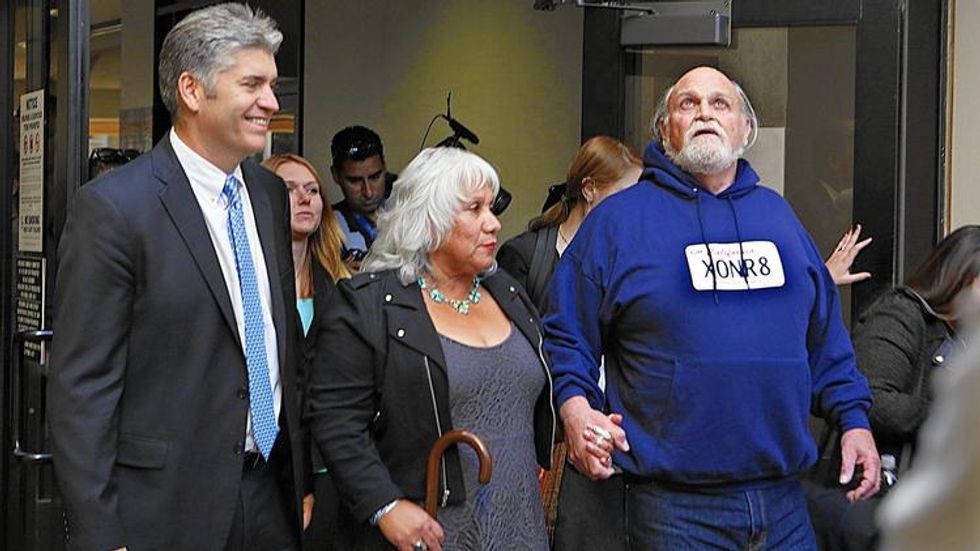 Here's a nice change: A story of what happens when the court system gets it right -- belatedly, yes, but on a day like this, we're about one post away from just saying screw it and posting adorable kitten videos all day, so we'll take what we can get.

In Los Angeles, Michael Hanline, 68, was released from prison Monday after being exonerated of a 1978 murder. California's longest known wrongful imprisonment came to an end when Hanline was freed on the basis of DNA evidence and re-examination of flawed testimony in his 1980 trial; the California Innocence Project was instrumental in a 15-year process to get his conviction overturned. His wife, Sandee, accompanied him as he left the Ventura County jail, where he'd been transferred before release. She'd brought along his cowboy boots, but Hanline has to wear an ankle bracelet until his next court appearance, next February, and prosecutors have until May 29 to decide whether to retry him.

Like any time traveler, Hanline was a bit disoriented:

"I feel like I'm in front of a missile and things are just flying by," Hanline said, holding Sandee's hand outside the jail. "It's incredible."

No surprises there. This man has been unjustly locked away since gas cost 65 cents a gallon and disco was still a thing (yes, yes, we know -- it's still a thing).

And how exactly did the DA decide to take a fresh look at Hanline's case? Tell us more, LA Times:

Hanline was convicted of first-degree murder and sentenced to life in prison without the possibility of parole in 1980, two years after the shooting death of Ventura resident [J.T.] McGarry, also known as Mike Mathers.

But in addition to DNA evidence that didn't match, several sealed police reports were uncovered that cast doubt on testimony by Hanline's then-girlfriend, Mary Bischoff, who was granted immunity and was a key witness during the trial.

Can't imagine why anyone would have a problem with Bischoff's testimony -- maybe because she'd been "smoking pot laced with PCP and had used cocaine on the night of the slaying," and also was so high while testifying that at one point the trial judge had to adjourn the court. We can see how that might have been an issue.

"The system failed on this one," said Justin Brooks, executive director of the California Innocence Project, based at California Western School of Law in San Diego. "He spent 36 years for a crime in a prosecution that never should have happened."

Welcome back to Earth, Mr. Hanline. We'd recommend you not read any news about Missouri for a while.