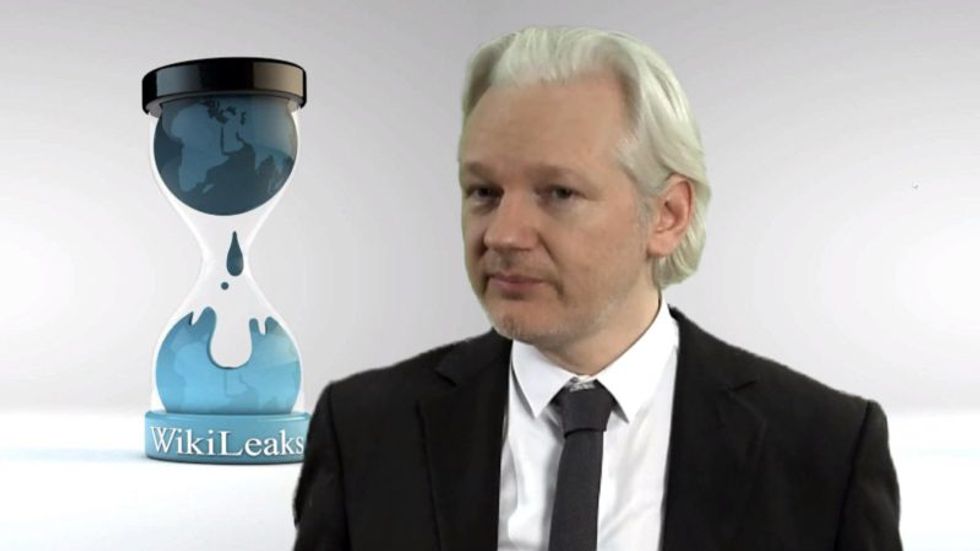 On Election Day, allegedly rapey albino ferret Julian Assange released a lengthy NotMea Culpa explaining that neither he nor Wikileaks had a favored candidate in the U.S. presidential election, and how dare anyone say otherwise. Now, sure, maybe Wikileaks did only release a metric fuckton of leaked documents from the Democratic National Committee, the Hillary Clinton campaign, and Clinton campaign chair John Podesta, but that doesn't mean the organization was trying to hurt one candidate and help another, he explained. It's simply that he wanted Americans to have all the information they needed to help make up their minds about who to vote for, and as it happened, the only leaks Wikileaks received were hacked from Clinton and those around her:

[We] cannot publish what we do not have. To date, we have not received information on Donald Trump’s campaign, or Jill Stein’s campaign, or Gary Johnson’s campaign or any of the other candidates that fufills our stated editorial criteria. As a result of publishing Clinton’s cables and indexing her emails we are seen as domain experts on Clinton archives. So it is natural that Clinton sources come to us.

Something, something, chicken/egg, banana stand, totally neutral but committed to openness. As Vox's Zack Beauchamp says, try pulling the other one, it's got bells on (OK, we are interpolating that a bit). As he really says:

This is very hard to believe. Assange has an extensive record of saying nasty things about Hillary Clinton, and it’s nearly impossible to believe that this didn’t animate his actions during the election.

Wikilieaks doesn't like the USA because it's the big nasty superpower that does a lot of evil in the world, a position we can mostly get behind, but in this election and Wikileaks's willingness to be a conduit for leaks from Russian intelligence services, Assange went well past showing us atrocities in Iraq. Instead, he equated "Hillary Clinton" with "All the bad things in U.S. foreign policy EVER," which is a a tad of an oversimplification, no? And by dumping on Clinton and downplaying the not-great-for-human-rights intentions of his Russian partners (Hillary Clinton doesn't murder critical journalists in public, for instance), Wikileaks was definitely helping out Donald Trump. Who, incidentally, makes funny jokes about having journalists murdered like Putin does. Besides, says Assange, who's to say he got any leaks from Russia, besides most tech experts who don't work for the FSB?

Funny thing, there! The Guardian reports that not only is Russia really darn happy about Donald Trump getting elected, it wouldn't mind if people wanted to throw a little credit its way, just to be polite. Sergei Markov, a pro-Putin political analyst, is pretty chuffed about Donald Trump and how he'll Make Russia Great Again, Also Maybe America (they shortened the slogans for hats sold in the U.S.). Not only can the USA and Russia "cooperate" to keep Bashar Assad in power in Syria, now Trump can drop those silly economic sanctions over the invasion of Crimea, and stop backing "the terroristic junta in Ukraine." But actually Putin a thumb on the scales? Never!

He denied allegations of Russian interference in the election, but said “maybe we helped a bit with WikiLeaks.”

The Obama administration accused Russian authorities of hacking Democratic party emails that were leaked to WikiLeaks. Putin has previously dismissed as “nonsense” claims of Russian interference.

You know, to help Americans make good choices! But definitely no influence on the election.

The could be true. Maybe a hack of the Trump Organization's computers only turned up copy after copy of the original shareware version of Tetris, plus a bootleg copy of "Oregon Trail" containing only the dying from dysentery parts because Trump only trusts people who work on an abacus.

In any case, it would be uncivil and probably McCarthyite conspiracy-theory madness to suggest anything untoward in the links between Wikileaks and Russian intelligence operations. Just as it would be to note that Russia's stock market is booming after the election here, in hopes that Donald Fredovich will lift sanctions. Crazy paranoid liberals, just looking for someone to blame for the DNC's corruption and Hillary's sex trafficking, not to mention Hillary Clinton's total failure to connect with voters.