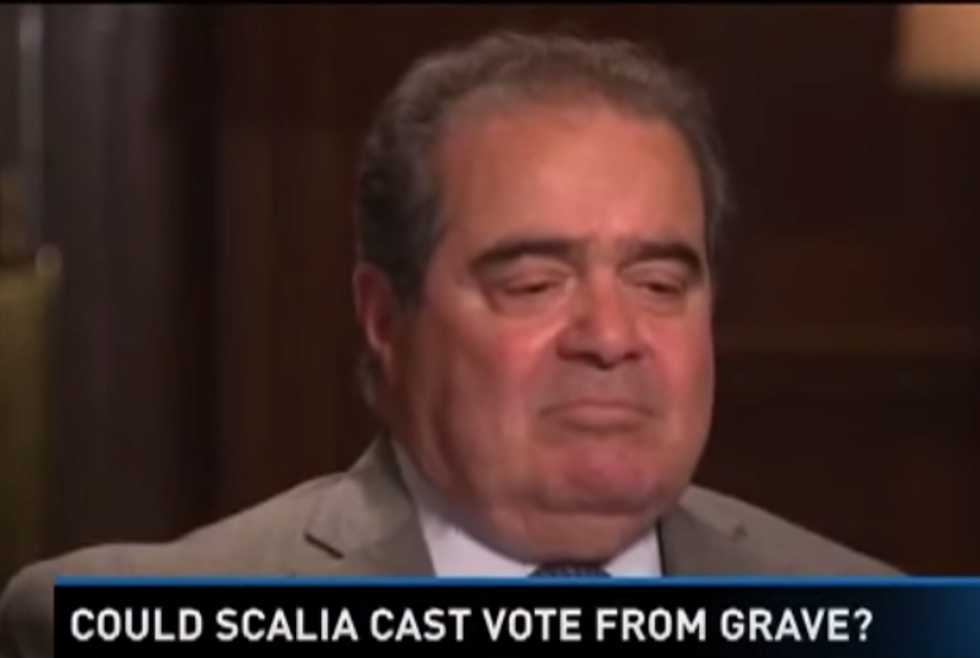 Here is a crazy idea from a crazy person that is so crazy, it just might work! (Spoiler: It will not work.)

Kory Langhofer, who is "not a fan of government," is allegedly a lawyer in Arizona, and he has thunked up a novel loophole for conservatives to continue refusing to fill the vacancy on the Supreme Court left by Antonin Scalia, who is dead now, while still maintaining that beloved five-is-more-than-four majority control of the Court. Tell us, O Wise Esquire, how this would work:

There's no Ouija board required to figure out how Justice Scalia would vote. He's already voted. You need to understand the timeline of how a Supreme Court case unfolds.

Langhofer explains how justices hear oral arguments on a case and then talk amongst themselves about it, but there is no step in the process when they consult the corpse of justices past for their cold-body take on things. But anyway, no reason they can't start now:

We're at the second-to-last step in how these cases unfold when Justice Scalia dies. So he's already voted. He's already heard the oral arguments, discussed it with his colleagues, in some cases drafted opinions. Maybe even the Arizona opinion was drafted by him. We know exactly what he thought. And it's not unprincipled to say we should give effect to that.

Well, sure. Except for how Scalia is dead, and America has a long-standing tradition of not letting dead people vote. But maybe it's different if the dead people are Antonin Scalia?

Also, at the risk of getting all nitpicky, how exactly are we supposed to know how Scalia voted on a case before he died? Maybe ask Notorious Superbad Badass Lady Justice Ruth Bader Ginsburg, Scalia's BFF on the Court, because she'd know what was in his heart, wouldn't she? If she says, for example, that he totally wanted to uphold affirmative action and also make abortion available free and on demand, in the case from Texas the Court is set to hear in March, well, who is anyone to argue with Dead Scalia's bestest bud, huh?

Alas, this other lawyer named Thomas Ryan has to be a wet blanket about the whole thing:

The general rule is, dead justices don't vote. I mean, that sounds cruel, but that's it.

It's problematic. Because I think if they come out with a decision, and they say, "This is the way Scalia voted, or he would have signed off on this opinion," there will always be some doubt or question as to whether or not that really was the case.

OK, yeah, there is that, if you want to get all technical.

[contextly_sidebar id="BaHvTUnzuXXUfVzbs72BClM2QagKzcVD"]We'd like to think such creative "legal" scholarship won't make it far outside the local Arizona station NBC affiliate's "Sunday Square Off" chit-chat, but then, Republicans are coming up with all kinds of fan-fic bullcrap to rationalize why the current authorized-by-the-Constitution president is not entitled to nominate a Supreme Court justice, unless it is Justice Scalia, so who knows? Perhaps we could then discuss how the ghost of Earl Warren will expand the Fourth Amendment. Maybe we could pay a visit to Thurgood Marshall's grave and confirm that he's still down to murder the death penalty once and for all.

Hey, this is fun! Fantasy baseball SCOTUS is gonna be the best.