Just Because 'True The Vote' People Are Paranoid Doesn't Mean IRS, FBI And ATF Aren't Out To Get Them 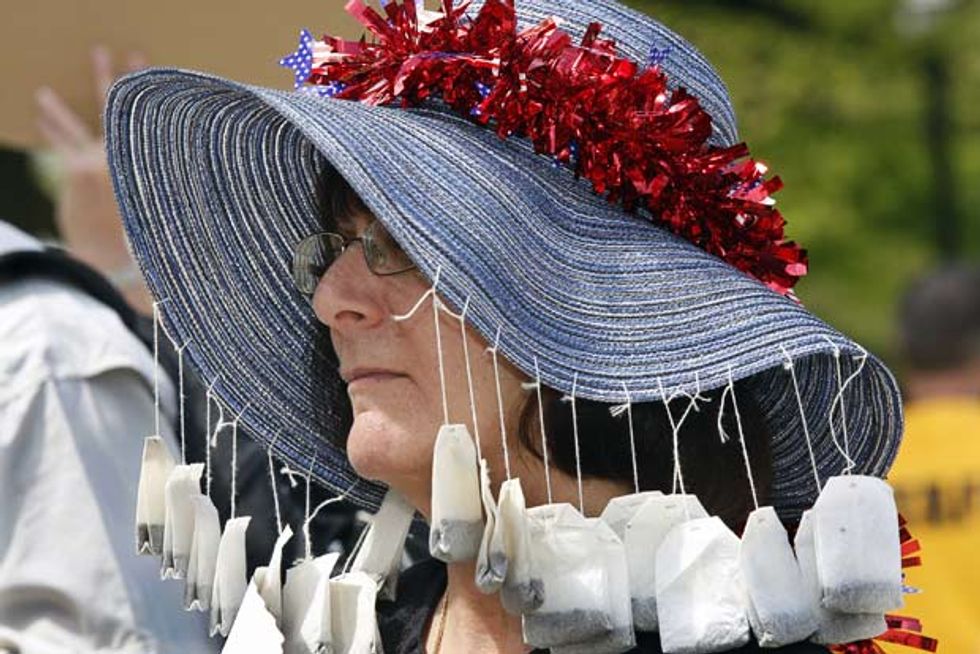 Wonkamigos and wonkiritas, we have a problem. It seems that some piece of shit Tea Party group has decided that it is perfectly appropriate to attack our beloved 2013 Legislative Badass of the Year, Elijah Cummings (D-Pure Awesomesauce).

And they did not only attack him, but they did so in a Congressional hearing. Yep, the GOP Majority, in their infinite wisdom, decided to invite these wackjobs to testify before Congress, which used to mean something. But apparently no one thought to give them basic lessons in How Not To Be A Asshole. Take it away, Politico:

A conservative group claiming it was targeted by the Internal Revenue Service stole the show at a congressional hearing on Thursday when it veered off topic and accused top panel Democrat Rep. Elijah Cummings of harassment.

We recently covered the bullshit IRS butthurt, but this takes it to a whole new level. Let’s wonksplore.

Here’s the backstory. Republicans are desperately trying to breathe any life possible into their ridiculous claims about the IRS targeting the Tea Party, which they did not do because they targeted lots of groups who filed for tax-exempt status. Because the facts are not on their side, they decided it might be a good idea to have a bunch of these severely oppressed whiny-ass titty babbies come to Capitol Hill and testify before Congress. Because what could possibly go wrong when you bring a bunch of hyper-political nutjobs and plant them in front of a microphone? Well, this could happen:

Catherine Engelbrecht, president of True the Vote, complained that Cummings [D-MD], ranking member of the House Oversight and Government Reform Committee “sent letters to True the Vote, demanding much of the same information the IRS had requested” after she filed for nonprofit status and then “would appear on cable news and publicly defame me and my organization.”

Them there seem like serious allegations and Engelbrecht filed an ethics complaint against Cummings. But wait. Perhaps it was more than just Cummings. What if it was a government-wide conspiracy directed at Engelbrecht? It would totally make her much more credible if she could also attempt to prove that the entire Obama Administration was in on it, spending tons of resources to harass her, because that is exactly what Big Government does, right?

After applying for tax-exempt status, Engelbrecht said her organization and manufacturing business received IRS audits and six separate inquiries from the FBI regarding “domestic terrorism.” Atop that, her business was inspected and fined by OSHA and the Bureau of Alcohol, Tobacco and Firearms.

She speculated that there was a type of government conspiracy aimed at her for founding a tea party organization.

Oh yes. This person sounds 100% not-crazy. Perfectly sane. In fact, we bet that OSHA and the ATF planted evidence in her businesses, too, right? Or maybe that was Elvis, who we all know is an extraterrestrial liberal patsy from the planed Xanadon sent back here for the express purpose of harassing Engelbrecht.

What are the facts, though? Why is this totally sane, not-at-all-crazy woman making these allegations?

Cummings did, in fact, write to the group asking them questions about their activities. What kind of activities? Well, True the Vote is very very interested in strict voter ID requirements, and they are active in monitoring polling stations on election days. But they are non-partisan, and who is anyone to say otherwise?

The Institute for Research and Education on Human Rights in 2012 reported that True the Vote’s poll monitoring efforts in North Carolina were tailored to African-American and minority communities that traditionally vote Democrat.

Oh. Well, we are sure that is a total coincidence, as we all know that minorities just can’t be trusted to vote the correct way, right?

Cummings said that he regularly writes letters when he hears about wrongdoings, just like other members of the committee, including the esteemed Chairman Darrell Issa.

His letters detail examples of challenges of voter registrations made by True the Vote that turned out to be wrong and seeks information about the methodology of the group’s challenges.

The group, Cummings’s staff said, describes itself as “a non-profit, non-partisan, non-political charitable and educational organization” yet “has raised millions of dollars for Republican candidates” and has a policy arm to try to limit early voting.

Does Cummings himself have any close personal experience with being denied the right to vote? Perhaps a family member?

“There is no one that I know of that cares more about the rights of our citizens than I do,” Cummings, an African-American, said. “I don’t care if you’re tea party or Democrat or Republican — I want to make sure no one is blocked from voting,” like he said his now 88-year-old mother was years ago.

Seriously, it got so bad that even the Republicans were all, “whoa, this is kinda nuts.”

“I don’t think the ranking member was attacked, but I instructed our staff to encourage [the group] not to proceed with the ethics complaint,” he said.

Seriously, that had to be like eyedrops of battery acid for him to come to Cummings’ defense. Even if it was a weak-ass defense.

Democrats, meanwhile, were understandably PISSED that these wackjobs were even invited to testify before Congress in the first place:

“What is so astonishing to me is that you would give them a forum to do this,” said Rep. Tammy Duckworth (D-Ill.). “I regret that our committee would allow [the hearing] to be used for such a blatant political stunt.”

Well said. And seriously, fuck Truth the Vote with their (seemingly) racist practices and for attacking our beloved Elijah Cummings.

If this really is a serious inquiry into governmental wrongdoing, then we don’t need partisan political stunts. We need good, honest independent investigators who will seek to wade through the politics and partisan bickering and really get down to the truth.

In fact, Treasury has an Inspector General who is doing just that. Well, maybe. Take it away, GovExec:

In the latest in the ongoing and politicized dispute over the Internal Revenue Service’s mishandling of tax-exemption applications, Rep. Elijah Cummings, D-Md., and Rep. Gerald E. Connolly, D-Va., sent a Feb. 4 letter to Inspector General J. Russell George objecting “strongly to your office’s repeated partisan meetings with Chairman Darrell Issa and his staff after intentionally excluding Democratic Committee Members and staff -- particularly regarding matters that currently are under active investigation by both your office and this committee.”

Yep. Darrell Issa is secretly meeting with the Inspector General and intentionally excluding Democratic members and staffers from those meetings. For the life of us, why would a so-called independent investigator possibly meet just with Darrell Issa?

On the House Oversight and Government Reform Committee.

Nothing to see here, folks. Keep on moving, because this investigation is 100% above board. No politics involved at all.

Follow DDM on Twitter (@Wonksplainer), or he will send the FBI, OSHA, and ATF to your business.