Just One More Thing: Why Did Michael Flynn Pay This Ex-FBI Guy $28K? 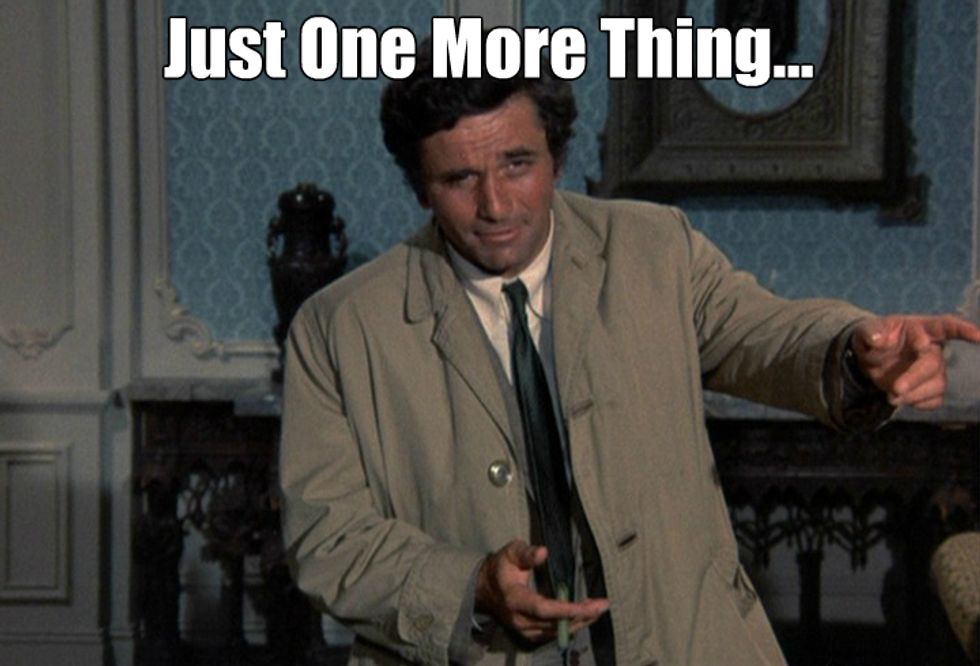 I know I've bothered you enough already, maybe it's just me, but...

Excuse me, I know I've taken up a lot of your time with all the details about Michael Flynn retroactively registering as a foreign agent because he was a lobbyist for Turkey and all that, but there's just one loose end I wanted to nail down here. Call it a hunch, or maybe I'm just chasing after shadows here, but doesn't it strike you as odd that one of the "consultants" that Flynn listed in his retroactive filing was retired FBI agent Brian McCauley, who also happened to be the main source of that story about a State Department official offering a "quid pro quo" in order to keep an email from Hillary Clinton's private server from being classified?

It's probably nothing. But the thing that gets me is that just two weeks after McCauley signs on with Flynn's outfit in October 2016, McCauley is the main named source in that Washington Post story detailing what McCauley said was a very explicit offer to approve the assignment of two FBI employees to Baghdad, if McCauley would see to it that a Clinton email wasn't retroactively changed from unclassified to classified status. You see here? MCcauley's first payment is October 4, the Post story is the 19th, and the election is coming right up in November. It's just one of those things that gets in my head and keeps rolling around in there like a marble.

The Trump regime will literally lie about ANYTHING.

And I know, just because one thing happens before another, it's not proof there's a connection. Flynn's a busy guy, consulting the Trump campaign on foreign policy while he's also lobbying on Turkey's behalf, trying to get one of Erdogan's political enemies sent back to Turkey outside the normal extradition process. I can see where a former FBI guy would be useful there. But in October of 2016, you've got to think the campaign is uppermost in Flynn's mind, right? And a former FBI guy coming out and accusing the State Department of trying to interfere with a classification -- of a document related to Benghazi no less -- that turned into some serious red meat for the base, although the State Department guy, Patrick Kennedy, swears up and down he never offered to make a deal with McCauley. Seems awfully convenient, McCauley coming forward like that just when he happens to be taking payments from Trump's foreign policy guy. Oh, and McCauley later said it was actually him who'd suggested the "quid pro quo" arrangement, after all the Republicans used it as a reason to yell "Lock her up!" Memory's a funny thing, isn't it? Lord knows nobody at the White House can remember when they found out Flynn was a lobbyist for Turkey, just long after it had been all over the media in November. Or they can't keep their stories straight.

Oh, The Top State Department Management Just Resigned. Did We Need Them?

As we all know from action movies, senior diplomats just get in the way.

What is Russia doing RIGHT NOW to continue its campaign to undermine American democracy? That's what Rachel Maddow wants to know.

Then you add to that, Patrick Kennedy is one of the most experienced people in the State Department, and just after Trump takes office, he and three other senior people at State are asked to leave, part of a huge exodus of top people there, and now the State Department is just an empty shell where you hear Rex Tillerson's footsteps echoing in the night, all lonely with nobody there to run foreign policy. People are noticing that's really convenient for Russia. Makes you wonder, doesn't it?

Anyway, as I say, there's probably nothing there, just a bunch of dots that don't really connect to anything. Tell you what, let me leave my card and you can call me if you think of anything helpful. This is probably the sort of thing Congress should set up an independent commission to investigate anyway, not some fictional detective who's been off the air for, what, twenty years? Thirty? It's amazing how the time flies when you're in reruns on basic cable.

Anyway, thanks for your time. Say, do you know anyplace nearby that sells dog biscuits?