Justin Trudeau Can't Figure Out Where To Put His Hands 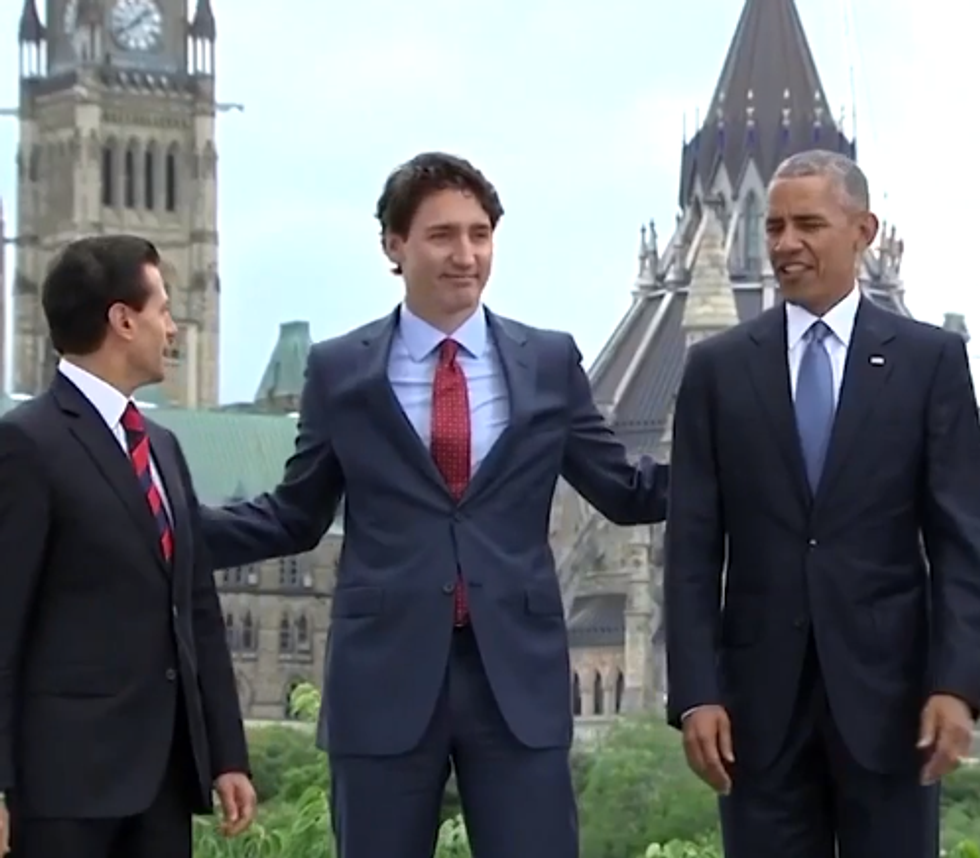 OK let us get two things out of the way right now. We already have a "smart post" on the Three Amigos summit up there in Canada, where all the North American leaders have been discussing and making big announcements on things like climate, trade, and whatnot. You should read that!

The U.S., Canada, and Mexico announced an ambitious plan to curb emissions of greenhouse gases, and we're wondering why no conspiracy theories have yet sprung up around it.

The second thing we must get out of the way is Canadian PM Justin Trudeau's hands, because he had that problem SO MANY OF US HAVE when there are three men in close quarters and you're in the middle and ... get your minds out of the gutter, you perverts, we are talking about HANDSHAKES!

Here, watch a Vine, and then we will screengrab the fuk out of it and narrate it for you. You should know that when esteemed news network CNN tweeted this Vine, it said, "North American leaders attempt the difficult three-way handshake," so we can be pretty sure whoever's running their Tweeter (Anderson Cooper probably) has dik on the brain too.

HMMMM, WHAT A FAST VIDEO! Guess we should analyze it forensically and scientifically, to find out who did their hands wrongbadly and messed everything up. Let's start at the beginning:

Jesus, Barry Bamz, what are you so grumbly about? By the looks of your face, you'd think Trump had his hand on your back! That's Justin! You LOVE Justin!

Barry still with the poo face. Justin eying the prize and getting ready to go in for the kill. (The HANDSHAKE is the prize, get your minds out of the gutter.)

Oh good, Mexican President Enrique Peña Nieto is distracted by something in the sky and Barry's gettin' the twinkle back in his eye. Let's DO THIS.

Oh NOW we see where this all started. Barry reached out like he wanted to cup something (Justin's HAND) and Justin was like "what?" Mexican president now trying to decide what animals the clouds look like, we guess.

OK, OK, now this is starting to work. The hands of the world's sexiest North American leaders are coming together, and all is well. Mexico president actually literally pointing at birds now.

Mexico President makes his approach. Barry's all, "Um, what do you think you are doing right now?" Justin, who always wants everyone to feel welcome, decides to use his other hand to do handies with Mexico President.

Oh wait, what is this? Mexico President, having already twisted Our Justin into knots, would like to do handies with Barry Bamz too? And he's reaching for the already clasped hands of Barry and Justin? Get your own Obama hand, Enrique! (His left one is available.)

Can you believe the Gawker post on this carries the headline "Justin Trudeau Finally Fucked Up"? How rude. It's a good thing Wonkette is willing to Zapruder film this Vine to death, to get to the REAL JOURNALISM TRUTH.

Enrique Peña Nieto is still pretty sure he wants everybody's right hand. This causes Justin to pull a fast move like whoa hey, all the hands! Like so:

Finally, Mexico president has what he wants, which is Barry's right hand. Justin's back where he was originally, trying to keep everybody comfortable.

Success! All the Americas are happy again, our leaders are smiling, and Justin Trudeau is hereby exonerated from all irresponsible accusations of having remotely caused this handsy kerfuffle.