Kamala Harris Is A Goddamned DELIGHT. She Can Be U.S. American President Now? 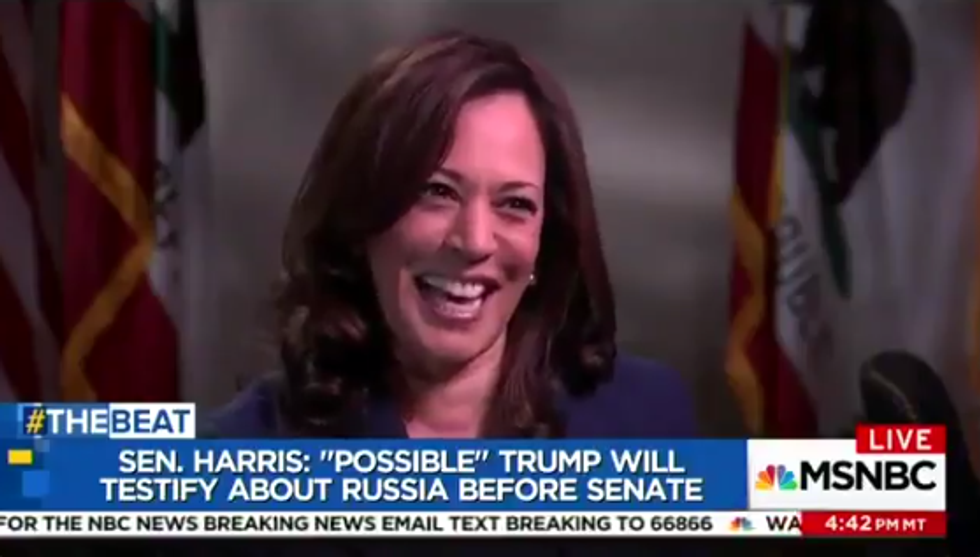 We've been big fans of Senator Kamala Harris for a long time, especially since she became the junior senator from California. She's really good at making those Republican boys confused and spittin' mad in Senate hearings (and also just in general), and hey, she just came out in support of single payer, which is a Good Thing! (We also wrote a YELLY THING about how it's Not Good for people to be shitting on Kamala Harris, a post that is correct and has aged very well, thanks for asking.)

But one thing we've noticed about Harris is that, since she's become a senator, she mostly keeps her head down and does good, hard work, and hasn't been one to run off to the TV cameras every time she's got something to say.

But Harris has peeked out a couple times lately, and Thursday afternoon, she appeared on Ari Melber's MSNBC program and gave an interview that was just DELIGHTFUL. We want you to watch the videos this time, even though you never do what we say, OK?

Here's Harris explaining why she's so passionate about reforming the bail system here in U.S. America. Is that an issue you've thought a lot about? If not, Kamala Harris is here to make you think about that:

“The poor person is paying a premium in a way that the rich person doesn’t,” - @SenKamalaHarris says on #TheBeat https://t.co/Qkmat9ExiD

In this next clip, Harris says Americans, REGARDLESS of political affiliation, even if they like Donald Trump for some reason, should be "concerned and troubled AND OFFENDED" at what Russia did to the 2016 election. WE WHO ARE WONKETTE AGREE.

Americans should be “concerned and troubled and offended” that Russia interfered in the election -@SenKamalaHarris https://t.co/ZzPSffFmjb

Next, Harris tells Melber it's very possible her Senate Intelligence Committee will reach a point where it wants testimony right from the nasty orange squatter in the White House. Melber asks, "Under what conditions?" Harris replies, "We'll see where the facts lead us." At which point Melber accuses her of SOUNDING LIKE DONALD TRUMP. (!!!)

In response, Harris kicks his entire ass right in the dick and leaves. JUST FOOLING, she replies, "Uh ... NOT AT ALL" and busts out laughing. See? DELIGHTFUL, even when you Trump libel her.

Why @AriMelber told @KamalaHarris she sounded "a little bit like @realDonaldTrump" tonight... pic.twitter.com/pOe5z4H49L

OK, we assume you've been good and have watched the serious videos up to this point. Now, the fun ones! Here, Melber does a word-association lightning round with Harris, and she shows remarkable restraint when called upon to finish a sentence that starts with "Ted Cruz ... "

.@AriMelber does a lightning round with @SenKamalaHarris on #TheBeat https://t.co/T710BLgehx

And finally, here is Harris telling Melber her biggest regret about her Spotify playlist of her all-time favorite songs (which exists and is awesome and you can listen right here), and it is that she's pissed she forgot to put Bootsy Collins on it. (Pssssst, Kamala Harris! You can add songs to your playlists anytime you want!) Then they talk about what a badass Stevie Wonder is.

What is @SenKamalaHarris's greatest regret about her @Spotify playlist for AfAm music month? #Funkadelic @AriMelber pic.twitter.com/baw7ZBaB6x

We believe we have proven our point about how delightful Kamala Harris is, yes? Therefore, by the holy decree of yr Wonkette, she will be our next president, unless somebody else awesome like Kirsten Gillibrand wants it, which would be OK too.

Kamala Or Somebody Else Badass 2020!

Wonkette salaries are fully paid by loving souls like you! If you love us, click below to make sure we get paid!