Kansas Teacher Does The Gay Agenda To Kids, Refuses To Resign In Shame 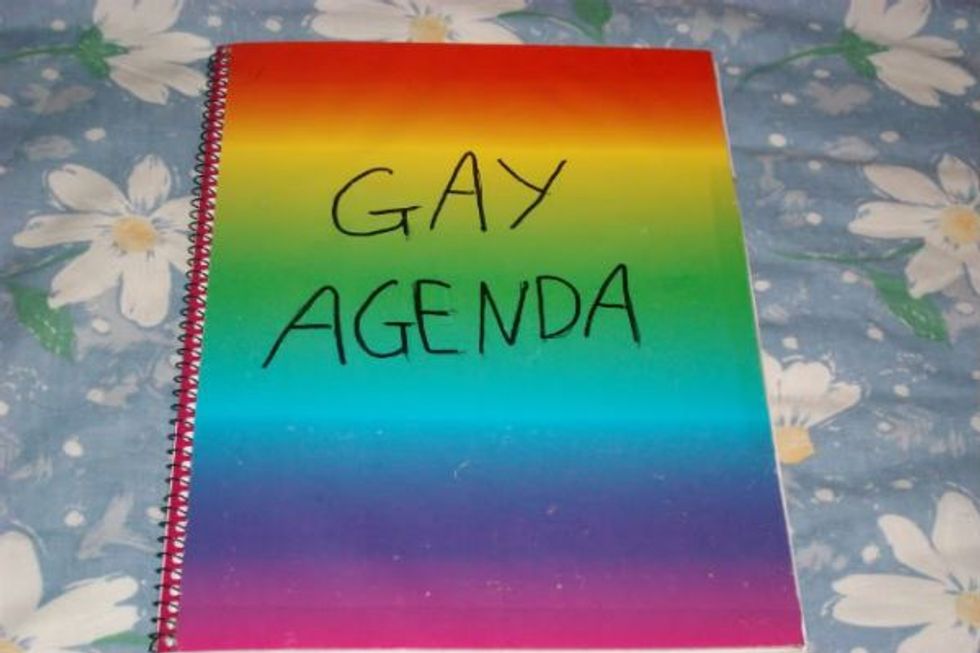 Welcome to Kansas, where the deer and the antelope play, the cows had voting rights before the women, and you're not supposed to be nice to the homosexuals. So there's a middle school social studies teacher in Conway Springs, Kansas, named Tom Leahy, and the school board has asked him to resign. Originally, he was going to do that, but now he's like FOOLED YOU, because he would like to keep teaching. Will the school board vote to get rid of him anyway? We don't know, we are not a psychic! (Of course we are.)

Leahy decided to get his students to do a little exercise, where they divided into make-believe U.S. American colonies. They were supposed to organize and draw up a Bill of Rights. And of course, one of the groups, which apparently consisted of a bunch of 14-year-old Sam Brownbacks, figured, "You know what? No queers in our colony, that's what!"

“I was expecting fairly positive kinds of colonies: ‘Do things we think are right, and be nice.’ But it just kind of got twisted around, and it became a place where certain people weren’t allowed,” Leahy said.

Kids are assholes sometimes, Science Fact. You try to teach them a nice, happy interactive lesson about creating good societies, and before you know it, the kids have established Westboro Baptist Church (which is also in Kansas!) as their official religion.

So Mr. Leahy says to himself, "What can I do to help these little children NOT grow up to be bigot failures? Ah, I know! I will show them a movie film, about bullying and tolerance, and maybe if they see the film, they will not one day be on the news for being homophobic Family Values sex hypocrites like Josh Duggar!"

Worth a try! So he showed them a short film called "Love Is All You Need," which is available at your local YouTube. It's one of those "imagine the shoe was on the other foot"-type things, or in this case, how would you feel if YOU were bullied for wanting to opposite-sex bone under the bleachers during homecoming, you little juvenile delinquent shits?

The 19-minute movie ... portrays a heterosexual girl being raised in a dystopian society where homosexuality is the norm. The girl is bullied by classmates – to the indifference of several teachers and other adults – until she commits suicide.

This is an important film because yr Wonkette can confirm that making heterosexuality illegal and frowned upon is the EXACT endgame of the Homosexual Agenda, of which we are an active participant. We have penciled this in for 2027, so HAVE FUN UNTIL THEN, BREEDER-SEXUALS.

Just kidding LOL, we are Saying A Silly. (OR ARE WE?)

So he showed the kids the video, and they all turned gay, or at least decided to start being decent human beings, right? NOPE. Whiny-ass butthurt parents complained, and Leahy was yanked into the principal's office like a common gum-chewer:

Some told him they were upset by the graphic nature of the film’s conclusion, which shows brief images of the main character slitting her wrists, the teacher said.

“Yeah, it was a little rough. I get it,” Leahy said Monday. “But shoot, these kids play video games that are decapitating people.”

Yeah, but at least GAYS aren't decapitating people in those games. More bitching:

Others objected to a scene in the movie in which a female church leader addresses a Catholic congregation:

“In light of recent events in the Netherlands, where heterosexual marriage is now allowed, Pope Joan VII wants to remind Catholics all over the world that the church has not changed its stance on this issue,” says the character, who is dressed in clerical robes.

“It is a sin for a man to lust after a woman. It is an abomination for a woman to lie with a man outside of the breeding season. … Any such person harboring lust in their heart for the opposite sex will burn in hell.”

This movie sounds HILARIOUS. But oh, how very terrible it must have been for these hellion children and their emotionally stunted parents to have to endure a 19-minute film what says the same things many gay kids have had to endure hearing from their families, their churches and their schools for DECADES. Fuck these people in the ear with the tiny violin we're playing for them right now.

So Leahy was placed on leave, and then asked to resign. And the school board was all ready to accept that resignation at its meeting on Nov. 9, but now Leahy says NOPE, citing his "conscience." (Pfffft, like gay-lovers even HAVE a conscience.)

He's a teacher, and teachers teach, even about about uncomfortable things that make little pants-shitting teenagers, well, shit their pants. Here's yr online petition to sign, telling the school board to keep this stellar teacher, even if it makes fundamentalist mommies and daddies scream, cry, and do accidents in their pants at the same time.