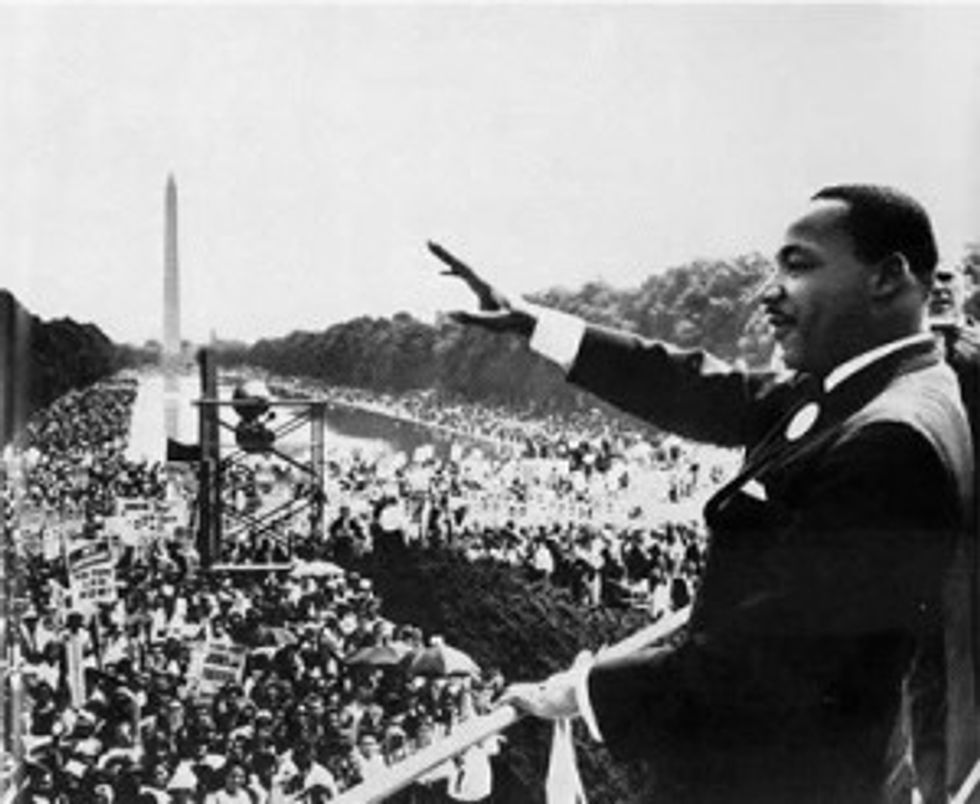 Oh goody, it is time for Pulitzer-prize winning columnist (yeah, we don't get how that happened either) Kathleen Parker to explain to us once more why President Obama is being reverse-racist against white people by being, you know, not white. (Or, ahem, as she likes to point out, only half not-white -- which is a perfectly valid and not-racist observation for her to make because she does not "see him as only black" and also because she is related to him in a cousinly way.)

In today's vomitorious mass of argle bargle, Parker sighs, for the eleventy billionth time, that is is SO ANNOYING the way Obama is always blacking on and on about how he is black. Don't you just hate that? She sure does.

How sad, as we approach the 50th anniversary of the march Martin Luther King Jr. led on Washington, that even the president resorts to judging not by the content of one’s character but by the color of his skin — the antithesis of the great dream King articulated.

Damnit, Obama, what did you do now to make Martin Luther King Jr. cry?

Barack Obama helped lead the way when he identified himself with the parents of Trayvon Martin, shot by George Zimmerman in the neighborhood-watch catastrophe with which all are familiar. Stepping out from his usual duties of drawing meaningless red lines in the Syrian sand, the president splashed red paint across the American landscape:

Oh, right. That. That totally true and not-controversial-except-in-the-minds-of-bigots fact the president dared to state. Gah, Obama, why must you say stuff like that? Don't you know that identifying with other black people is racist? Don't you know it "inflames racial hatred" among Fox "News" commentators and the wingnuts who love them and forces them to be even more racist, but in a totally just kidding non-racist way, so stop being so sensitive about it like Peggy Noonan said, ugh.

The thing that the president does not understand about MLK, as Parker explains, is that the best way to fight racism is to acknowledge that it doesn't really exist and just stop talking about it. Or something.

I make these observations not to exacerbate a problem but in the hope that we can stop this craziness before things escalate. The conversation-about-race that pundits keep insisting we need to have should end where it began.

Sure, the president might think that there is such a thing as racism and racial profiling, but he is SO WRONG, and Parker can prove it.

Even today, I am followed when I go to the second floor of a boutique in Georgetown. Apparently, store policy requires that an attendant be upstairs when a shopper is. The way department store clerks follow me around, you’d think my face was plastered on a “Wanted for Shoplifting” poster. This is especially so if I’m dressed like a slob.

See? Parker is followed when she shops in fancy-shmancy boutiques, so, ipso facto, there is no such thing as racial profiling! (Maybe she is followed because she is cousins with half-black Obama, though, so she is being racial-profiled after all? Betcha didn't think about that, did you, KATHLEEN?)

Nothing is fair about profiling, but one’s treatment by a stranger is not always necessarily linked to one’s racial or ethnic history. Sometimes it’s just . . . you.

That's a fair point. After all, we do not think Kathleen Parker is A Idiot because she is a white lady. Sometimes it's just her.

We are sure Dr. King would agree with Parker that the real race problem in America is how people keep trying to talk about it like it's a problem. So please, President Obama, listen to your cousin and stop being so racist all the time, with all that talk about race and all that mentioning that you are black. That's what Dr. King would want, if he were alive today and hadn't been assassinated because ... oh never mind.