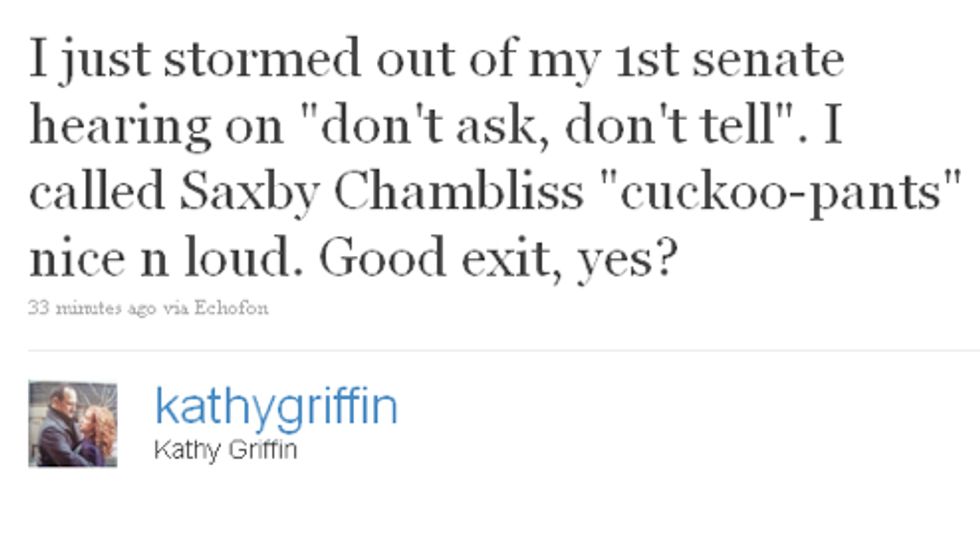 Ha ha, it's Kathy Griffin, from... wherever she's from! She is the one who curses a lot on CNN's Anderson Cooper New Year's Party, yes? In one of those "unplanned" moments of live television. Well she is now in Washington D.C., videotapingsomething that will not advance gay rights.

Kathy Griffin was filming herself outside the White House leading an anti-DADT "rally" for her Bravo television show, I'm Famous Enough, Right? It was co-sponsored by the gays' #1 fame-whore of a lobbying arm, the Human Rights Campaign, described perfectly by Alex Pareene as "an organization that exists to collect money from rich gays and use that money to politely not ask or expect very much from Democrats."

Then actual gay rights activist Dan Choi -- the Arabic translator who was kicked out of the Army for loving dudes -- showed up to chain himself to the White House fence! FOREVER! This legitimate form of protesting did not sit well with the HRC and television producers' fake-protest production:

According to Tweets from Robin McGehee at GetEqual (see stream below) reporting from the Kathy Griffin - Human Rights Campaign "Don't Ask, Don't Tell" rally, McGehee, who is traveling with Lt. Dan Choi, asked Human Rights Campaign President Joe Solmonese if Choi could speak at the rally and he rebuffed her, telling her it was Kathy Griffin's rally.