Kayla Moore All 'Who Cares If Roy Molested Kids? LET'S TALK ABOUT FAGS!' 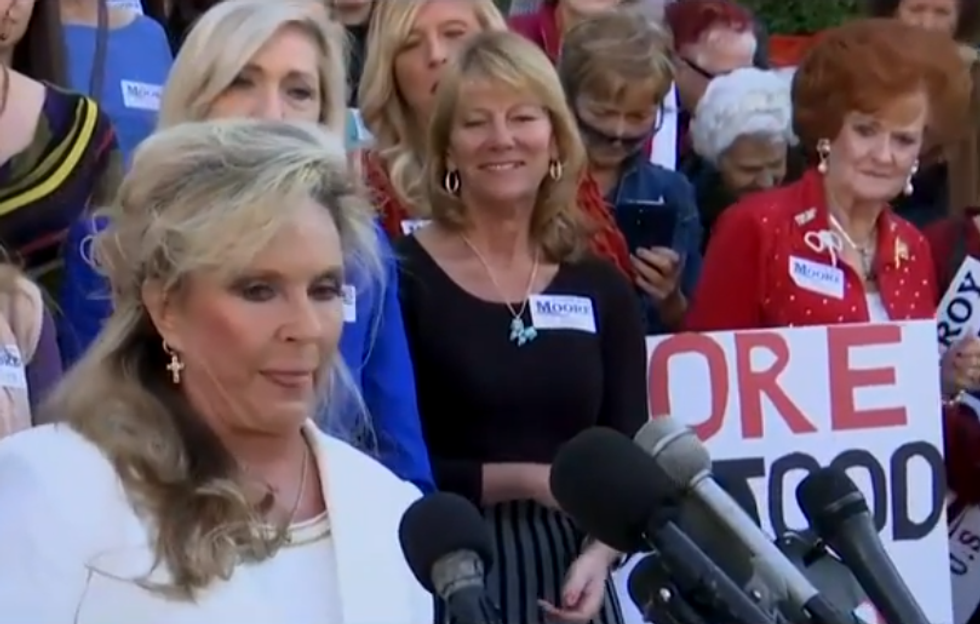 Oh man we are proud of this screengrab

Kayla Moore, wife of Roy and known asshole, spoke to supporters Friday to reassure them her husband won't be leaving the race for the Senate, attempted child rape and sexual abuse allegations be damned. The gathered crowd appeared to be the women's auxiliary of the Kiddie Diddle Bible Society of pastors (including Alan Keyes and craziest wingnut Christian lady in America Janet Porter, who was pretty sure Obama was going to use the swine flu outbreak as an excuse to put everyone in concentration camps! AYUP, these are Roy Moore's friends!) who spoke in support of Roy Moore yesterday.

In a short message, Kayla Moore continued her message of Christian hope, which didn't remotely address the many allegations against her husband, but was mostly about how God Hates Fags. Like we said, Kayla Moore is an asshole.

Moore talked about the coalition of naysayers who for whatever reason don't like people credibly accused of molesting children, listing the Washington Post (which endorsed Hillary!), the Human Rights Campaign (queers!) and the "Washington establishment" (Mitch McConnell!). Indeed, she said the people attacking her husband are the same people who attacked our Dear Leader Trump! She added:

Personally, I think he owes us a thank yew. Have you noticed you're not hearing too much about Russia?

(By the way, that was supposed to be a #KaylaMooreJoke. If you didn't laugh, you're probably a hellbound heathen like the rest of them.)

Moore then said a prophetic word about her husband's opponent, Doug Jones:

... an ultra-liberal, who was an Obama delegate, who is for full-term abortions ...

(She is of course talking about the wingnut myth that liberal abortionistas constantly deliver full term babies only to smash their brains and sell them to the Planned Parenthood Baby Parts Sports Bar & Grill for parts. Nobody is aborting "full-term fetuses," which are usually called "newborns.")

Which is apparently that trying to rape children is cool as long as you hate the transfags and the gaygenders.

BREAKING NEWS: Alabama Governor Kay Ivey is convinced! Though Ivey has up to now been the only Alabama Republican coming out of this smelling like a rose, she told reporters minutes ago she's proud to vote for her party's nominee, Roy Moore. She also still says she believes the women. Kay Ivey: Votin' for the kid-toucher and proud of it!

But back to the Kayla Moore presser. After reminding everybody that Doug Jones loves it when transgenders do nine-month abortions, she levied quite an attack on the Washington Post:

Whoa, is she accusing reporters of ... being reporters? You better take that back, Kayla Moore, you fuckin' mean ass church lady, them's fightin' words!

She added that WaPo prints things without even checking to see if they're true, which is adorable.