Kellyanne Conway And Pals Went On The Sunday Shows And LIED About Medicaid? The Hell You Say! 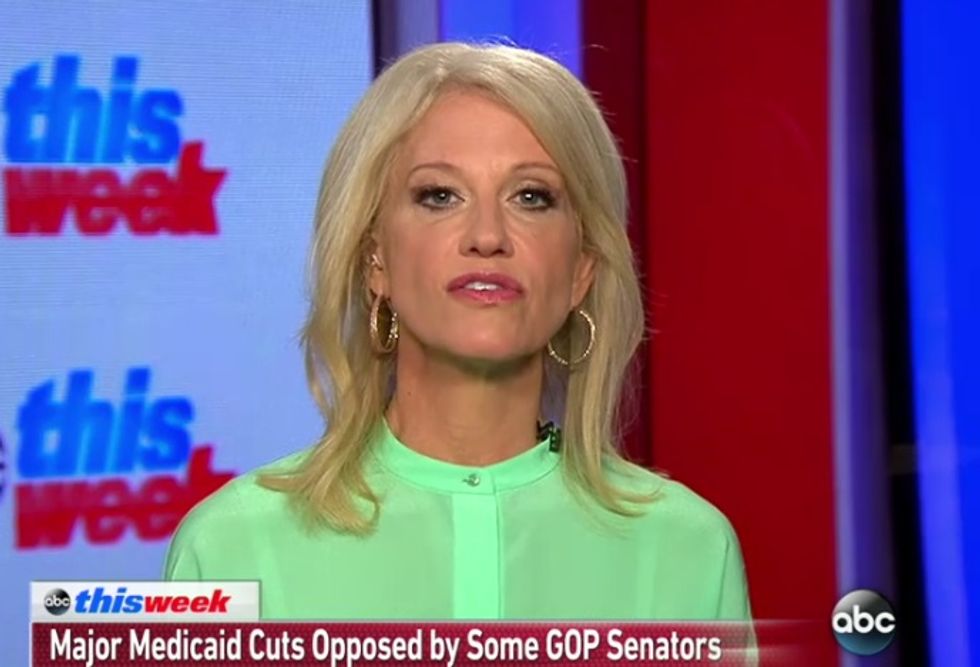 Someone help her! She's being devoured by a Key Lime pie!

Trump surrogates took to the Sunday shows and had all sorts of interesting alternative facts about the terrible GOP plan to kill Obamacare, plus a few thousand poor people, with the amusingly named "Better Care" bill, which will roll back the Affordable Care Act's Medicaid expansion and also slash funding for Medicaid overall. Here's Kellyanne Conway explaining to George Stephanopoulos on ABC's "This Week" that $800 billion in cuts to Medicaid aren't really $800 billion in cuts to Medicaid:

These are not cuts to Medicaid, George. This slows the rate for the future and it allows governors more flexibility with Medicaid dollars because they're closest to the people in need. Medicaid's imperative, its founding was meant to help the poor, the sick, the needy, the disabled children, some elderly women, particularly pregnant women. We are trying to get Medicaid back to its original moorings.

See? All they're doing is slowly reducing the amount spent on Medicaid in the future, not cutting it. Oh, and also placing a population-based cap on the amount of federal funding provided to states, and turning the program into a block grant, instead of matching state funding, which shouldn't be a problem at all, because then governors can be more "flexible" about who they'll allow to lose services. But don't worry, it won't hurt anyone who's on Medicaid today, because it hasn't passed yet, silly. Conway just plain lied, saying,

If you're currently in Medicaid, if you became a Medicaid recipient through the Obamacare expansion, you're grandfathered in. We're talking about in the future.

Not quite so, since the Medicaid expansion will actually be fully rolled back in just four years. Then again, that will definitely be the future, and since most human cells die off and are replaced over time, it's true that most of the people currently on Medicaid will be made of mostly different matter by the time the expansion is gone. Except their brain cells, of course, but the Trump administration has never considered those a priority anyway.

Beside, all the Republicans want to do is return it to its roots, said Conway:

You know, Obamacare took Medicaid, which was designed to help the poor, the needy, the elderly, the sick, the disabled, also children and pregnant women, it took it and it went way above the poverty line and opened it up to many able-bodied Americans who should probably find other -- should at least see if there are other options for them.

If they're able-bodied and they want to work, then they'll have employer-sponsored benefits like you and I do, so...

Of course, there's a slight problem there: Most non-disabled adults on Medicaid already have jobs, but not jobs that provide insurance, because requiring employers to provide insurance is fascism. But if poor people are foolish enough to get jobs that don't provide insurance, that's their choice, isn't it? They really should consider becoming network anchors or White House spokespeople, because those jobs do provide insurance, you dumb poors. Also, let's not even mention the people with severe disabilities who'll have to learn to take some responsibility for breathing without ventilators, maybe.

Then there was Wisconsin Sen. Ron Johnson, who explained that people with preexisting conditions are a lot like beat up old Chevy Novas, and why should the rest of us have to have our car insurance go up to support wrecked cars, huh? On "Meet The Press," Chuck Todd pointed out that if the House or Senate had actually held hearings, they might have been able to learn from insurance companies why they're leaving some markets and jacking up their rates in others (he didn't note that it may have something to do with Donald Trump's unwillingness to commit to actually paying the premium subsidies the ACA requires).

Well heck, said Johnson, ignoring the question about the lack of hearings and pivoting to his really cool talking point about how sick people are wrecked cars. The sad truth is that "nobody wants to talk about it," but the problem is that the ACA won't let insurers jack up rates for people with preexisting conditions:

We know why those premiums doubled. We’ve done something with our health care system that you would never think about doing, for example, with auto insurance, where you would require auto insurance companies to sell a policy to somebody after they crash their car.

States that have enacted guaranteed-issue, which is the guarantee for preexisting conditions, it crashes their markets. It causes the markets to collapse. It causes premiums to skyrocket.

Paul Ryan, Donald Trump Promise If You Like Your Cancer, You Can Keep It

That's pretty weird, considering that the states that require protection for people with preexisting conditions are all of them, which is the very provision of the ACA Johnson is complaining about. But since the insurance companies have only given up or dramatically raised rates in some states, maybe the preexisting condition rules aren't the problem, or there are solutions other than pricing anyone who's ever been sick out of the market? Also, we are reasonably certain people are not cars. When people break, they're a little more difficult to repair or replace. Senator Johnson may have fallen asleep watching a Pixar movie.

Meanwhile, over on CNN, Tom Price, the Secretary of Undermining Health and Dismantling Human Services, insisted to Dana Bash that the planned Medicaid cuts aren't cuts, not really, and that nobody will be hurt because of all the flexibility. Never mind the CBO estimate that Medicaid would be slashed by over $800 billion:

"It all depends what you’re comparing it to,” Price said. “The fact of the matter is the Medicaid proposal in the Senate bill goes up every single year that the plan is in place because it’s based on the consumer price index, initially based on the consumer price index that’s related to medical care across the country. And it goes up every single year. It’s important that the people appreciate that what our goal is, is to make it so folks on Medicaid, the most vulnerable in our society, those moms and kids and seniors and the disabled, that program works for them in a way that allows them to get the coverage they need in addition to those who are also in the vulnerable category—that they’re able to get the kind of coverage that they want and need for their families."

Sure, Medicaid funding won't keep up with the actual demand for services, but there's a nominal increase each year, so how can you call it a cut? Also, math is hard, while talking points are easy, so there. Get a job, you hippie.

Yr Wonkette is supported by reader donations. Please click the "Donate" clicky to give us money. We are not cars, either.