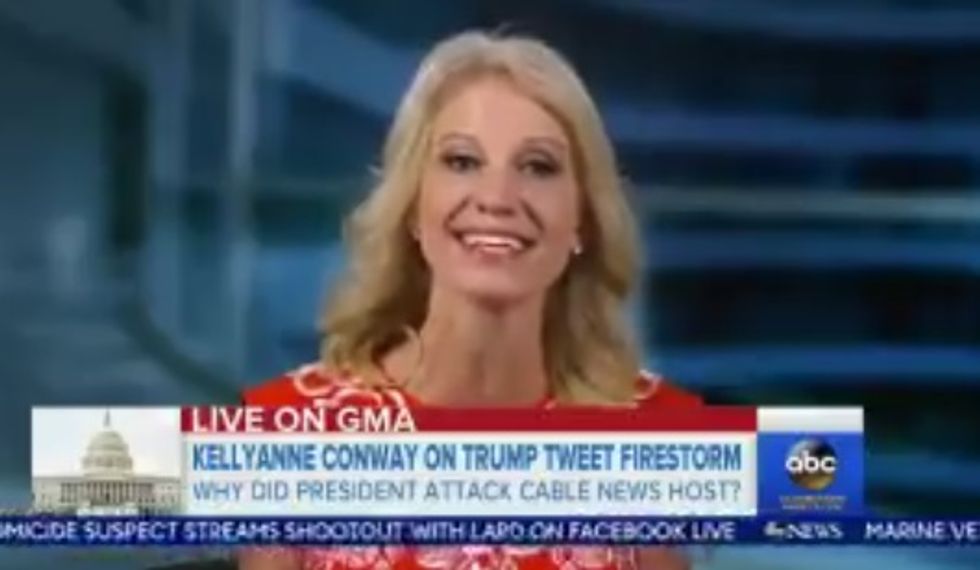 Kellyanne Conway had a thing or two to straighten out with George Stephanopoulos on Good Morning America today, especially how the liberal media have cheapened our political discourse and done a disservice to America's Lady Women by paying attention to all the weird stuff Donald Trump tweets instead of informing the ladies, on morning shows like GMA, about how tax cuts for the wealthy and slashing health insurance for 22 million will benefit ladies and their families.

"The toxicity both ways … uh, coming to the president is terrible," Conway explained, correcting herself because all the toxicity is coming at the Great Man, obviously. Stupid media, always concentrating on all the insults directed at the president by Mika Brzezinski's bleeding face:

The idea that the media, large parts of the media anyway, are covering personal insults about the president, this invective, and really denying America’s women their rightful knowledge on what he’s doing for them on taxes, on health care --

Ever the wily fake newser, Stephanopoulos countered that maybe the media are talking about Trump's tweets because he tweeted stuff, and wouldn't talk about his tweets if they were not tweeted, but she wasn't buying that. After all, if Trump hadn't tweeted about Mika's face shooting blood at him like a Gila Monster (an urban myth, actually -- Mika only spits a bloodlike substance from poison glands on her neck), then "you'd be talking about Russia."

Oh, did she ever have him! She pointed out that the biased media simply refuses to talk about the president's wonderful tax plan, which will help women so much, or about infrastructure, either, even though that refusal to promote the president's agenda hurts

American people, particularly women, who tune into these shows to get information about what's going on for them. This is someone who's trying to get those millions of women who lack health care coverage, this is a man who's trying to get tax relief and entrepreneurship freed up in this country for those American women who want to -- and it doesn't get covered! It just doesn't get covered. There's toxicity about this president.

Also, please note that THERE IS NO TAX PLAN.

Though maybe there would be if low-IQ media hoor ladies would stop bleeding at Donald Trump and let him work!

Ms. Conway then explained why so many U.S. Americans, like such as, cannot find their own country on a map, because the media keeps lying about Trump:

And now it is your open thread, at least until the Holiday Weekend Friday News Bomb drops, probably.

Yr Wonkette might be able to get something done if you people would just send us money by clicking the "Donate" clicky below. Stop making us pay attention to Kellyanne, dammit!