Kellyanne Conway Has Fun With Words! Wonkagenda For Thurs., July 13, 2017 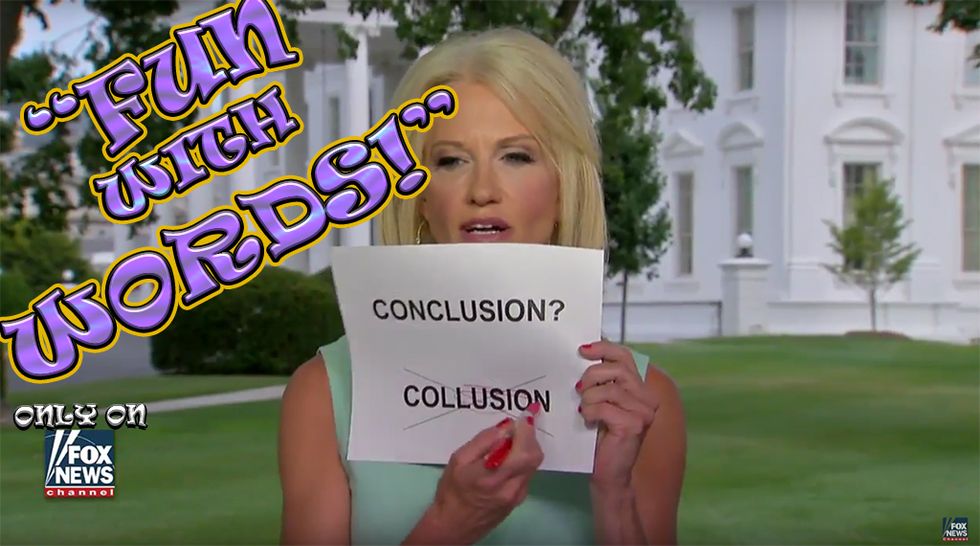 There was an unusual amount of chatter by Russian officials right before Trump announced his run for the White House, according to the Wall Street Journal (which is not letting poor people read the story).

Russian hackers and trolls were way too efficient at targeting US voters, and it looks like someone was helping them. I wonder who it could have been? Prince Kushner? Cambridge Analytica? Why not both?

If you're confused about Trump-Russia, here's a handy 'splainer timeline thingy, and some *~memories~* of days gone by. Don't say we've never done anything for you!

The Justice Department is defying a court order to release documents about Jeff Sessions meeting with Russians because reasons, or no reasons, either way.

Trump says he'll be "very angry" if there's no healthcare bill. That may be why Mitch McConnell has been hiding in his shell lately.

A new Kaiser Family Foundation study suggests Obamacare isn't dying at all, it's actually starting to get much better, though it cautions about the need for true reform.

CruzCare would allow insurers to sell "junk insurance" as long as they also sell mandated ACA plans. It's feared that the plan would further destabilize insurance markets if adopted onto McConnellCare, creating an actual "death spiral." It's like they're not even trying now!

People are bracing for the release of TrumpCare/McConnellCare, but only because they're afraid that the bill will rip away whatever they're holding on to.

It's unclear whether Senate Republicans have the votes, let alone the resolve, to pass a new healthcare bill as people like Rand Paul and Susan Collins are on opposite ends of the spectrum.

Under Trump, Homeland Security is protecting 'MERICA from all the spooky brown people who keep trying to sneak in from Not America.

A Justice Department watchdog report is criticizing the Bureau of Prisons for placing mentally ill inmates in solitary confinement, and for a whole host of other things that we just can't really makes jokes about. :(

Trump is SUPER MAD that his kids are being dragged down with him, but the only thing that's juvenile here is their behavior.

The GOP is going to dig for dirt on Democrats with ethical problems for 2018 as they have no actual policies beyond helping kill poor people and tax cuts for the wealthy.

Democratic California Rep. Brad Sherman has introduced articles of impeachment for Donald Trump, accusing him of obstruction of justice. To be quite honest, this seems a little premature, but beggars can't be choosers, right?

Big Tobacco hasn't quit, they've just been keeping their heads down as they try to block a "regulatory runaway train" powered by "anti-tobacco extremists."

Some nuns built a small chapel in the middle of the DAPL route in an effort to stall the pipeline and piss off the construction company.

GOOD NEWS, EVERYONE! The Chicago Sun-Times was bought by group of investors and local labor unions led by former alderman Edwin Eisendrath after staving off a proposed buy out from TRONC, which has been attempting to gobble up local papers across the country.

After state legislators FINALLY overrode a veto to pass a budget, Illinois Governor Bruce Rauner has been firing his staff ahead of the 2018 election, which is expected to be the most expensive state race in US history.

Trump is letting three Afghan girls into the US for a robotics competition. So, okay, good!

There's creepy photos of Evangelical pastors touching Trump in the Oval Office. I hope they remembered to wash their hands before eating.

Delicate snowflake Tucker Carlson melted while attempting to defend himself when a guest from the Council on Foreign Relations told him that he lacks "moral judgment."

Hannity really ratcheted up the newspeak last night with Kellyanne Conway when she clarified the definition of collusion, conclusion, delusion, and illusion by holding up signs. Later he made fun of Joe Scarborough's hair and thus broke one of the most sacred rules in TV news. [Video]

And here's your late night wrap-up! Colbert had some talky time with John Oliver; The Daily Show explained Fox's "Doncathlon" of defenses for Trump.

And here's your morning Nice Time! A baby giraffe that's just happy to be outside! It's the little things, guys!