Kellyanne Conway Is Not A Good Person

Oh hey, looks like STFU Kellyanne Conway is becoming a daily tradition at Ye Olde Wonkette. This week we've heard her complaining that the media and/or the Trump Transition Sausage Party is being "sexist" to her by reporting that she's on the outs with Trump for furiously and publicly campaigning against Mitt Romney being given the reins of the State Department. No, we are still not sure why that is "sexist," but hey, we are not sure about a lot of things.

Wanna know what's REALLY sexist? It is when a 17-year-old girl -- who happens to be the daughter of badass Mother Jones reporter David Corn -- asks Conway how she, as a woman, deals with what a nasty old pussy grabber (ALLEGEDLY LOL) her boss is. Conway was talking to a kids' AP Government class in DC, and oh boy, they got to ask questions. Here is what happened, per Associated Press reporter Steve Peoples: 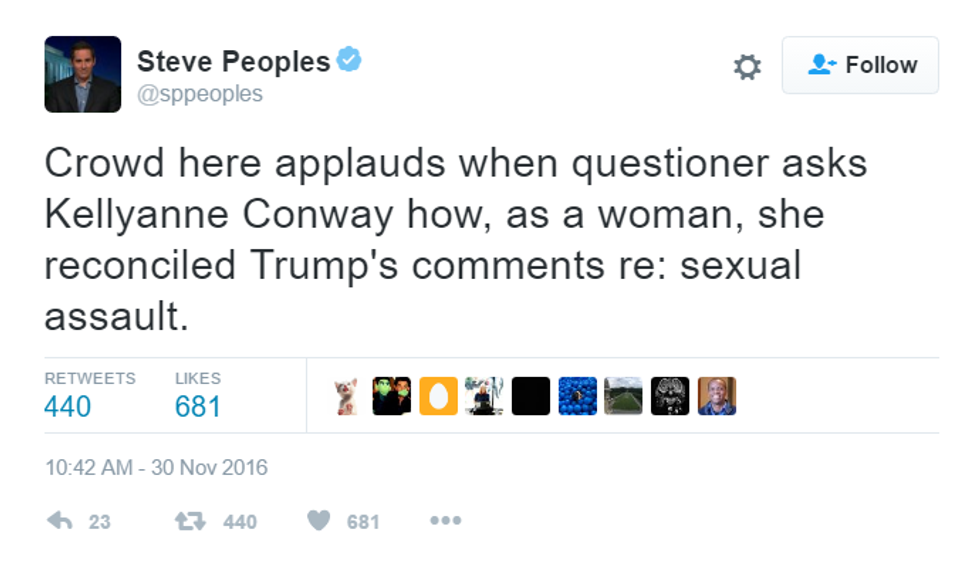 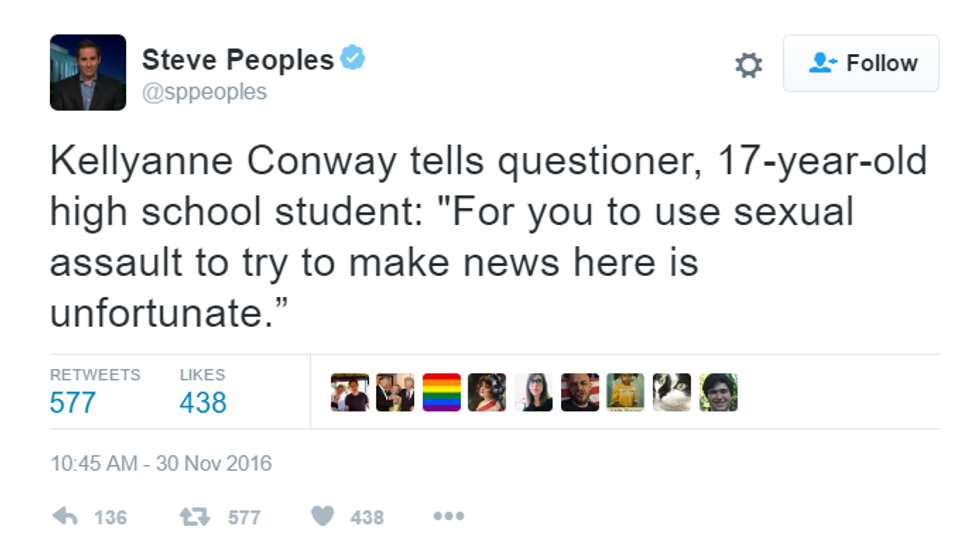 SHAME ON YOU FOR BEING SO "UNFORTUNATE," DAVID CORN'S DAUGHTER! Why, she probably learned that kinda "gotcha" journalism from her dad!

Christ, what an asshole Kellyanne Conway really, truly is.

Now, we know what Conway would say about Trump's lady habits -- that she is the first woman to run a Republican presidential campaign, which is true! She might also note that Trump has never personally grabbed her by the pussy, so she's not sure what all the fuss is about.

Back in October, when MSNBC's Stephanie Ruhle grilled her on the subject, Conway had some other things to say about all the women who came forward to accuse Trump of groping them, and on his general distaste for respecting women. If we may quote from our earlier post on the subject:

That's right, it was NO FAIR when Stephanie Ruhle asked her how she looks at her kids at night, and it's NO FAIR when a 17-year-old girl asks how she, as a woman, sleeps at night, considering what a disgusting misogynist she helped elect. SHAME ON THAT MINOR CHILD! Did her daddy not teach her that pussy-groping's not a bad thing, as long as the president does it?

Like we said, Kellyanne Conway is not a good person. And to think we used to have something akin to sympathy for her! PFFFFFFFT, fuck that.

Trump Lawyers: Congress Can't Not Go To Court To Decide Subpoenas Court Has No Say Over!