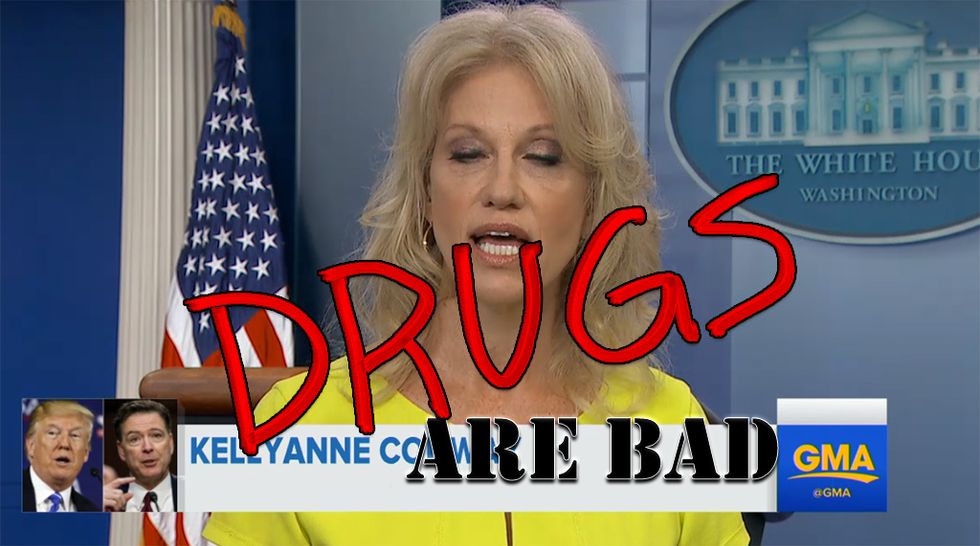 Trump's White House has launched a multi-million dollarad campaign to combat the opioid crisis with the hope of making teens think twice before getting addicted to prescription drugs. If that sounds familiar it's because it's just Ronald Reagan's "Just Say No" campaign ground up and repacked in a convenient time-released formula.

Since this is the brainchild of Kellyanne Conway and two PR firms, these 30-second after-school specials are intended to scare millennials straight. The PSAs reenact true stories of people who purposely injured themselves in order to get prescription painkillers.

Trump's White House is turning its MAGA hats and chairs around to rap at younglings on the dangers of chemical dependence by buying ads on social media and Vice News. "Our goal," Conway said in an overly prepared statement to reporters, "is to show young Americans the dangers of misusing opioids and how quickly one can become addicted to opioids." Hey, it's better advice than, "eat the ice cream, have the French fry, don’t buy the street drug."

This funky and fresh campaign was a collaboration between the Ad Council and the Truth Initiative, the ad wizards who made all those laughable anti-weed commercials throughout the 1980s and 1990s, and the obnoxious anti-smoking bozos who hire actors to lay down in the middle of the street. The Ad Council is the non-profit propaganda arm of Uncle Sam that has been attempting to show you your brain on drugs for decades. The Truth Initiative is the billion dollar baby created with moolah from big tobacco, and it's been quietly stretching its tendrils out into all sorts of public health initiatives since the late 2000s, while hiding from a multi-million dollar embezzlement scandal. Both have offices a few blocks from the converted closet Kellyanne Conway calls an office.

Considering how much time and money was undoubtedly wasted on this farce, Donald Trump could have just given another sniffle-laden press scrum, called cocaine a "hell of a drug," and tossed out warm cans of Bud Light. The overtly edgy ads are clearly designed to force a debate that skirts the edges of opioid addiction.

Rather than representing an initiative that encourages people seek treatment and medically safe alternatives for pain management, these ads are just boogeymen that scream "DON'T DO DRUGS."

In 2016 Trump flew his jet around the country promising to wave his golden wand and end the opioid crisis. When he told Chris Christie and Jared Kushner to look into it, they came back with a report saying doctors needed to stop passing out pills like Halloween candy, and that addicts need rehab, not prison. Instead listening to the advice of his own advisory council, Trump dug through the couch cushions for loose change to throw at the problem.

While these ads highlight a growing problem for many people suffering from addiction, synthetic opioids like fentanyl have now become the leading cause of overdose deaths. The CDC notes that prescription death overdoses are not listed on death certificates, but neither is the involvement of synthetic opioids, so the total number of opioid-related deaths is unknown and likely underestimated.

We're not saying this campaign treats addicts as victims instead of the putting pressure on pharmaceutical companies that donate heavily to political campaigns every year, that would be libel!

It is common, however, for small town newspapers to update their obituaries several times a day, or for people to avoid saying grandma OD'd on hillbilly heroin, just as a matter of respect. Strange how the 21st century war on drugs contains all the same themes as the old anti-gun, drugs, and alcohol campaigns of old: This stuff is dangerous! (For kids!)