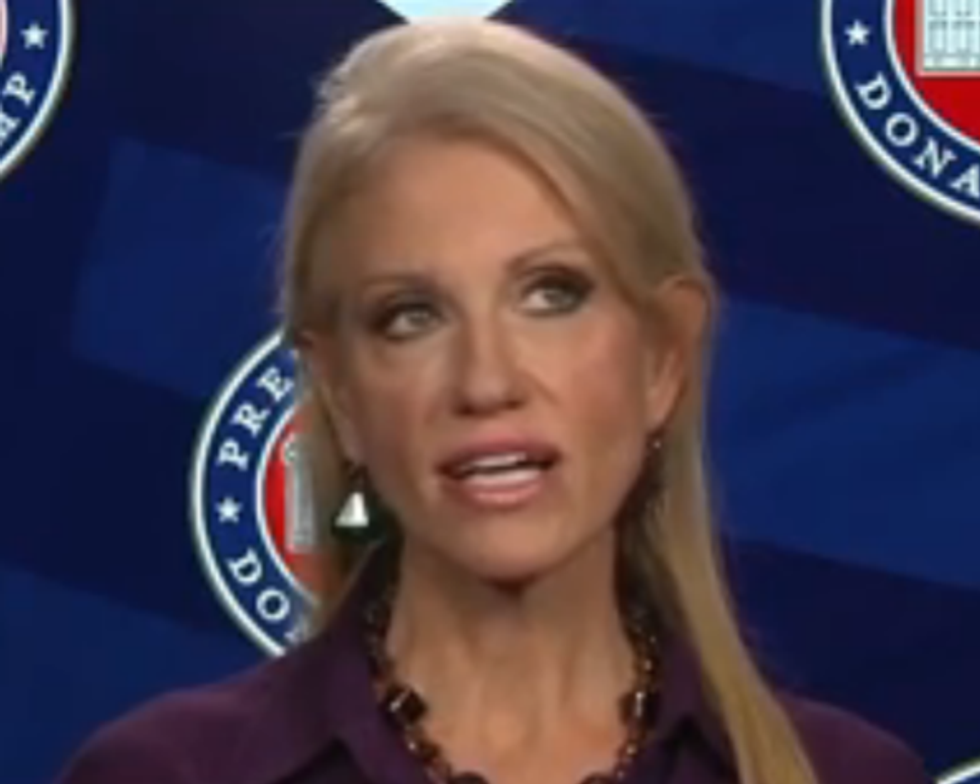 Move over, Sarah Palin, Wonkette has a new favorite person to screengrab.

Deck the halls with boughs of butthurt, Kell-ell-ell-ell-ell-ell-ellyanne! Oh wait, it's not Christmas, it's Donald Trump's inauguration week, and Kellyanne Conway is still out there complaining about how everybody is so mean. Monday morning, we told you about how it's So Unfair, You Guys that all these stories are coming out about Trump's alleged collusion with the Russians, because that's, like, classified. And now, building on her complaint that American people are always being rude saying Trump should act like "the bigger man," we find her trying to justify why Trump was right to attack civil rights hero Congressman John Lewis.

Greta Van Susteren has settled into her new MSNBC digs, where her new show is the same as her old show, and she hosted Kellyanne Conway Monday evening! After letting Conway talk about Trump's nice meeting with Martin Luther King III, Greta V. S. repeated her original question, which was about Trump's fight with John Lewis. "C'MAHN, Kellyanne, shouldn't one of them say sorry?" That is what Greta Van Susteren seemed to want to know:

CONWAY: Greta, but let's review for everyone what was said, also, as we are reminding everyone and ourselves that Congressman Lewis is a civil rights and voting icon worthy of respect and his place in history, so no one can take that away from him. At the same time, why use the word "illegitimate" to describe Donald Trump as our president? That's just false. It's regrettable, and I think particularly ...

There was crosstalk, and then Greta Van Susteren made her point, which was that she understands that Trump "fires back," but that "sometimes it's not necessarily about being right or who's to blame," and she said it would be a "good gesture, by one of them," for somebody to apologize, so we can "try to resolve this for the rest of us." Her point was that they need to have a beer summit and get past this, we think.

To which Conway replied:

DONALD TRUMP MET A BLACK PERSON, SO YOU FORGIVE HIM RIGHT NOW.

At the same time, you know, Greta, it's a lot. I mean, if you work at the Trump campaign, the Trump transition, the Trump White House, it's like being the WALKING WOUNDED, everybody's always gunning for us and we're just supposed to look the other way at all times.

"Walking wounded?" (That ALL-CAPS-ing is ours, for emphasis.) WALKING WOUNDED?!

In fact, Conway did go on to talk about how historic Trump's win was, pointing out that Trump even won Congressman Lewis's state by YOOGE margins. (Factcheck: Trump won Georgia by only 5.2 points, whereas Romney won it by 7.8. Rep. Lewis won his district, Georgia's 5th, with 84% of the vote. You can imagine how well Trump did there, in Atlanta.)

Our point is that Kellyanne Conway and Donald Trump bristle at the "illegitimate" thing because they know on some level that, in many (many) ways, it's true. His approval ratings are historically low for an incoming president (hovering between 37% and 40%), America hates him, and he lost the popular vote to his opponent, a girl, by almost THREE MILLION VOTES.

Moreover, it is a historical fact that Russia interfered with the election in order to help Trump win, and it's looking ever-likelier that Trump actively colluded with Russia (and maybe the FBI!) to cheat his way into the White House, because shitty businesspeople like Trump tend to take their "wins" by cheating.

So if they want to be butthurt about being called "illegitimate," we guess that's their right. Their sensitivity on the issue speaks VOLUMES, believe us.

Anyway, this has been your daily edition of Kellyanne Conway Is Sad/Lying/Mad/Snatching Wigs About A Thing.