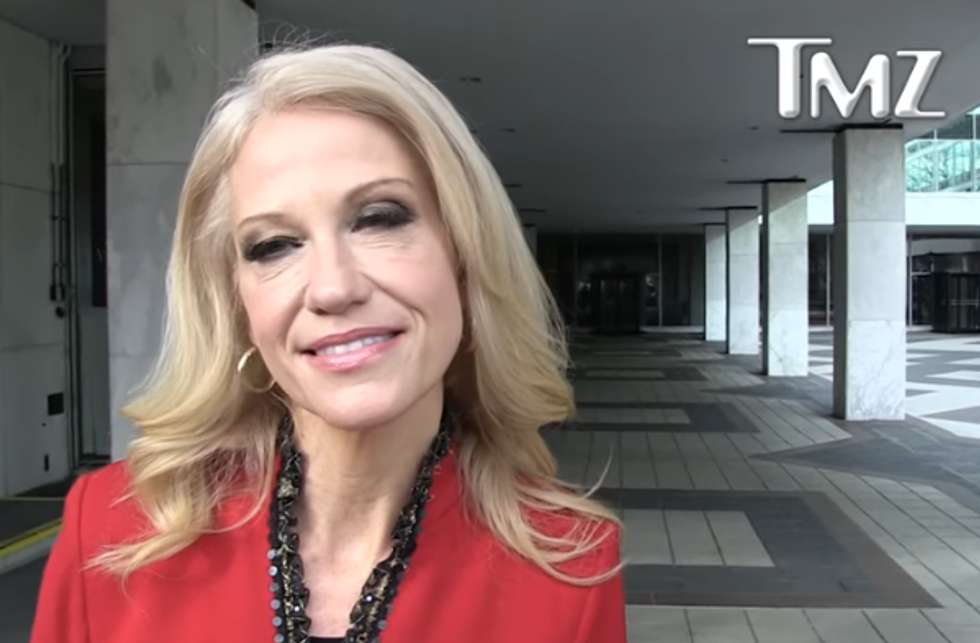 SHE WAS THERE, SHE REMEMBERS IT

Kellyanne Conway "misspeaks" a lot. Like sometimes she means to order the steak, and instead she shouts, "I am in the process of eating my hand off RIGHT NOW!" Other times she's trying to describe why Donald Trump's Muslim ban is necessary, and she says it's because of that horrible event they don't teach the school children, because it never happened, called the Bowling Green Massacre. (OK fine, there was one in 1643, when white people slaughtered a fuckton of Native Americans, including babies in a really bad way. Kellyanne Conway does not know that.) When she said that to Chris Matthews, though, it was an accident. She meant the Bowling Green Kerfuffle That Didn't Happen In Bowling Green! Or something! Honest mistake, happens to all of us. Uh oh, getting breaking news right now that the Harrisburg Dinosaur Fisticuffs are happening, with dinosaurs, in Harrisburg!

Just kidding, we must have misspoken.

But it turns out Kellyanne Conway is "just kidding" quite frequently when it comes to the Bowling Green Massacre, which did not happen. She cites it often! Cosmopolitan magazine broke the story, citing an interview it did with Conway, where she said "Bowling Green Massacre" and spun around three times in a row or something:

[I]n an interview with Cosmopolitan.com ... on Sunday, Jan. 29, Conway used the same phrasing, claiming that President Barack Obama called for a temporary "ban on Iraqi refugees” after the “Bowling Green massacre.” (The quotes did not appear in either of two stories recently published on Cosmopolitan.com.)

"He did, it’s a fact," she said of Obama. "Why did he do that? He did that for exactly the same reasons. He did that because two Iraqi nationals came to this country, joined ISIS, traveled back to the Middle East to get trained and refine their terrorism skills, and come back here, and were the masterminds behind the Bowling Green massacre of taking innocent soldiers' lives away."

Cosmo decided to factcheck the blueberry princess, because literally if her mouth is moving, she's lying, and found that, for instance, according to the Justice Department, the men did not go back to Iraq for training. It's a given at this point that the men did not inflict a massacre on Bowling Green. But Conway told the magazine this just proves her point because here's why:

In a follow-up text exchange Sunday night, Conway wrote, "Frankly they were terrorists in Bowling Green but their massacre took place in Iraq. At least this got clear-thinking people to focus on what did happen in Bowling Green.

NOTHING. HAPPENED. IN. BOWLING GREEN! Let's also remember that Conway tells this story as a way of claiming President Obama did THE SAME THING and banned Iraqi refugees when these arrests happened. There was a slowdown, and there were new vetting processes implemented, but no, Obama did not do THE SAME THING.

Anyway, doesn't matter, because the Bowling Green Massacre is apparently Kellyanne Conway's very favorite story, like it's even better than the Bible or The Poky Little Puppy. The Daily Beast found Conway telling TMZ, also on January 29, that Trump's Muslim ban is necessary because Obama did THE SAME THING when he banned Iraqi refugees (again, Obama didn't) after the "Bowling Green Attack," because we guess you don't have to call the Bowling Green Massacre a "massacre" if you don't feel like it. You can call it an "attack" or a "spree" or "the Corvette museum," as long you're clear about the fact that a terrible thing happened in Bowling Green, Kentucky, and it was Obama's fault.

SHE MERELY MISSPOKE. Like a hundred times! You would do the same thing if you were a terrible person and a liar and on Donald Trump's payroll and your job was to lie and obfuscate and confuse the American public about what President Steve Bannon is doing to destroy the country.

Hey, did you hear the Trump administration offered to have Kellyanne Conway come on CNN on Sunday, but CNN was like "Fuck that liar, because she lies"? FAKE NEWS, WHY IS CNN COVERING UP THE BOWLING GREEN MASSACRE?