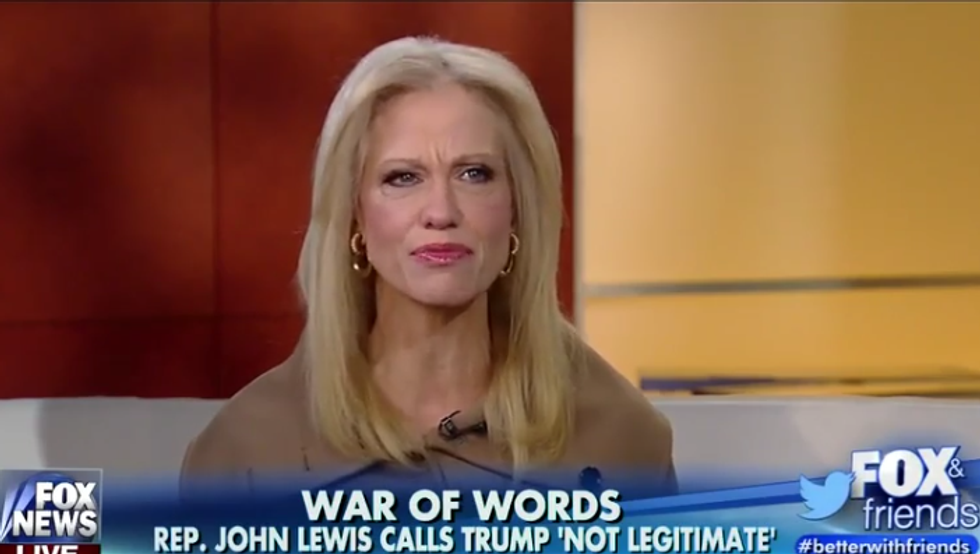 She looks like she smelled something. MAYBE IT'S THE SMELL OF HER OWN COMPLAINING.

It's Monday, so it's time for another dispatch from America's newly appointed Priestess of Propaganda, Kellyanne Conway. (Did you know she was a cheerleader in high school and also she won the New Jersey Blueberry Princess pageant in 1982? Bet she was a total lie-faced dick back then too. #TriviaFacts)

Anyway, Trump's World Champion Blueberry Cheerleader Liar went on the "Fox & Friends" fake news program, because as is so often the case when she gets up in the morning, she needed to complain. Specifically she was bellyaching about how it's SO MEAN that all these intelligence agencies are leaking things about Dear Russian Leader Trump. Know who's NOT spilling Trump's Russian secrets? It is the Trump campaign!

I’m always disappointed just how public and sometimes political some of these figures can seem to be. I’m very concerned, very concerned, and people should realize it is the Trump team, only us at this time, who are not divulging what occurred in a classified briefing.

BECAUSE YOU ARE THE ONES WITH SECRETS TO KEEP! And it looks like they're Russian secrets, since regardless of how much of that old British spy's report is true, American intelligence agencies already broadly agree someone was doing the hacking, and it was Russia! And they take the old spy's report seriously enough that they're looking into it! (And so is Israel, because our bestest friend is worried it won't be safe to share intelligence with Trump's America, because it might get shared with Russia and then Iran.) And it looks like there are also too secrets about a rogue sleeper cell in the FBI that worked to steal the election for Trump.

It's a wonder that Trump team is so tight-lipped, like HUH!

Ladies and gentlemen, it’s called a classified briefing for a minute. [She meant "reason," we guess, but she said "minute," because probably her brain died for a second there. - Ed.] You had the vice president of the United States making a comment about it the other day. You have intelligence officials confirming or denying. This is classified information. Why is it top secret? It’s not top secret to keep it from the public, but to protect the public.

Um, yeah, about that. We actually agree that, 99.9% of the time, we Average Joes should not know what happens in classified briefings. Thing is, we're talking about the very survival of our republic right now, which is why the intelligence community is going a bit apeshit right now. They are trying to PROTECT us from the threat to our nation named "Donald Trump." And that old British spy? He worked on this without pay, because he was trying to save us. Kellyanne Conway may not understand this, because she loves power more than she loves her country, but the rest of us get it just fine. So shut the fuck up, Blueberry Princess.

Of course, these were not Kellyanne The Con's only complaints. Heck no, it was a pretty long segment! Let's look at her bellyaching about how people are always making fun of Donald Trump and calling him a stupid puss-burgling creep:

When he's attacked, everybody just says he should be the bigger man.

Why is he attacked in the first place? [...] He has had an unprecedented deluge of attacks, gratuitous and personal attacks against him.

WELCOME TO HOLDING THE HIGHEST ELECTED OFFICE IN THE WORLD, MORONS. If Trump doesn't have the stones to handle it, he shouldn't have run for the office.

Now, we're willing to accept that maybe the scale and the intensity of the attacks is much higher than it was for Obama, because the anti-Trump movement is smarter and better educated and wittier than the dumb racists who went after the Obamas. Not apologizing, just explaining!

At the beginning of the segment, she also complained that people are protesting Trump and saying he's #NotMyPresident, explaining that "hashtag," he is our president. Now, we could spend a bunch of time litigating whether his election was even legitimate (LOL), or we could point out that Trump's approval rating as an incoming president is so small he could hold it in his tiny hands (37%!), and the second he actually starts governing, that number is going to slip and fall as fast as a Russian pee hooker who tried to jump off the bed really fast but forgot the bed was covered in pee, thus making it very slippery. Sad!

This has been your daily dose of Kellyanne Conway Drops Giant Load Of Horseshit On America, can't wait to see you tomorrow when she does it again, BYEEE.