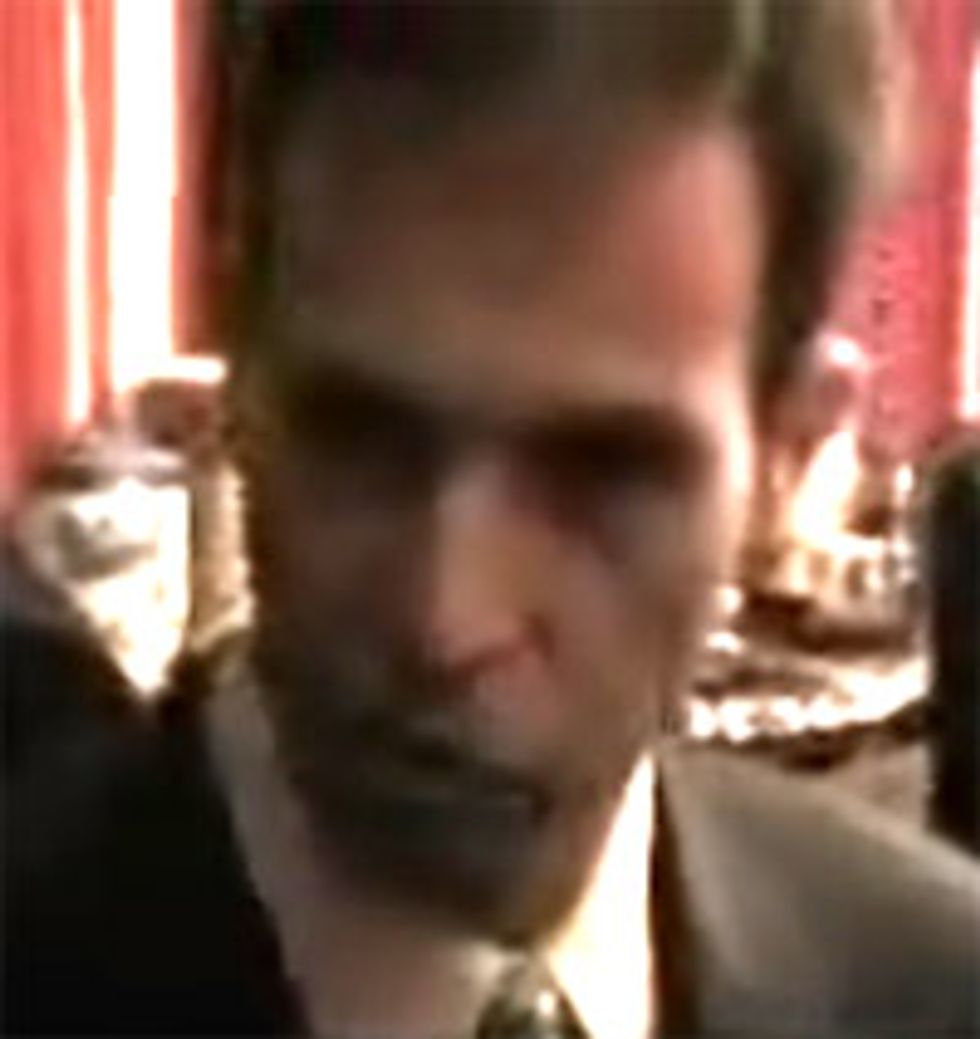 Rumors about former RNC chair Ken Mehlman'sComplete Gayness have been swirling around for years and years.  Mike Rogers outed him several years back, as part of his campaign to rid the political world of homosexuals who cynically use the rest of the gay community as bait in order to convince rubes, yahoos, bumpkins and other morons to set down the teevee clicker even if it means missing the last five minutes of The 700 Club, in order to go out and vote Republican, due to abject fear of gays.  Mehlman's sins were particularly egregious, since we are after all talking about the guy who helped run the most anti-gay presidential campaign in history, which gave us Four More Years of the Crawford hick and his handlers, Karl and Dick.

Anyway, now Ken Mehlman has something to say!  "Are you there, God?  It's me, Ken Mehlman, and I suck bags of dicks!  No, God, I mean literally!":

Ken Mehlman, President Bush's campaign manager in 2004 and a former chairman of the Republican National Committee, has told family and associates that he is gay.

Mehlman arrived at this conclusion about his identity fairly recently, he said in an interview. He agreed to answer a reporter's questions, he said, because, now in private life, he wants to become an advocate for gay marriage and anticipated that questions would arise about his participation in a late-September fundraiser for the American Foundation for Equal Rights (AFER), the group that supported the legal challenge to California's ballot initiative against gay marriage, Proposition 8.

"It's taken me 43 years to get comfortable with this part of my life," Mehlman said. "Everybody has their own path to travel, their own journey, and for me, over the past few months, I've told my family, friends, former colleagues, and current colleagues, and they've been wonderful and supportive. The process has been something that's made me a happier and better person. It's something I wish I had done years ago."

Oh, but if you had done it years ago, Kenneth, you wouldn't have made eleventy billion dollars by publicly fighting the gay demons in your mind, for Evil, which you then used to buy a swanky $3.7 million man-pad in Chelsea.

Anyway, also, Ken Mehlman is very confused as to why The Gays never signed on to Republican pants-shitting campaigns against Muslins:

He often wondered why gay voters never formed common cause with Republican opponents of Islamic jihad, which he called "the greatest anti-gay force in the world right now."

I wonder why! For the answer to this question, let's go to our slightly more serious homosexual reporter, also named Evan Hurst:

Oh, that’s because the Republican plan for fighting Islamic extremism is laughably stupid, driven by emotion and fear, and exemplifies all the characteristics of Severe Small Penis Syndrome. Additionally, it’s been a hilarious failure everywhere it's been tried. Thanks, Bill Kristol!

Simple answers to simple questions, this has been.

For his part, Mike Rogers wants to see Ken Mehlman do a LOT of apologizing and public self-flagellation before he will even think about allowing him to be a Socially Accepted Gay:

And those state marriage amendments. I want to hear him apologize for every one of those, too.

Also, he should probably be punched on live television by Ellen DeGeneres and Portia de Rossi, and maybe one of the man-fags from the So You Think You Can Lip Sync While Wearing Wigs or the So You Think You Can Make Pretty Dresses, For Girls, or whatever the hell shows the gays watch obsessively, in groups, while squealing, especially since Mehlman is still giving money to anti-gay candidates!  As Joe Jervis said, "hookers call that 'working both sides of the street.'"

For their part, this news is making the homosexual wingnuts show everybody their yucky Quisling boners, which is never appropriate, especially so close to 9/11.

Anyway, welcome to gayness, Ken!  Nobody is going to have sex with you, but don't let it bring you down, because they probably weren't having sex with you before. [Marc Ambinder/Truth Wins Out/BlogActive]