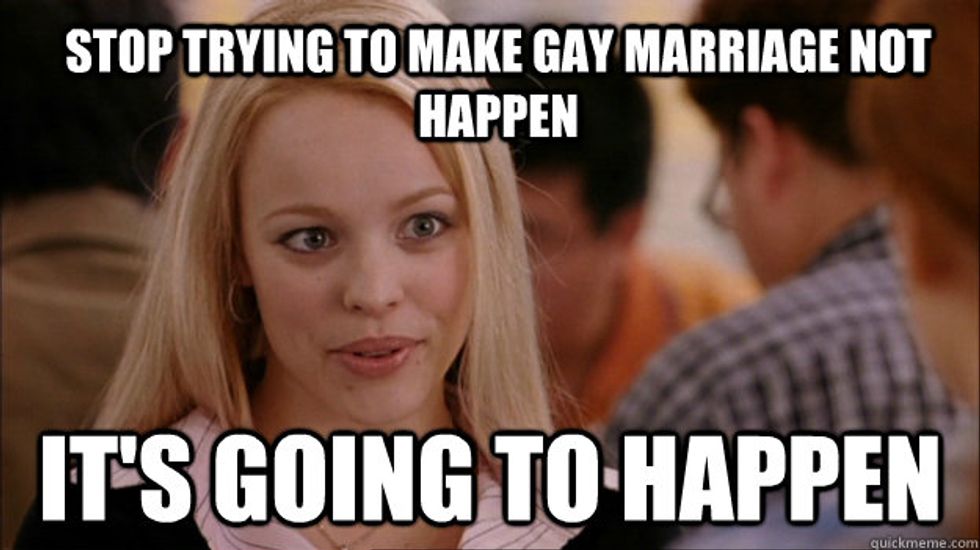 Would you like to read Kentucky's latest sad "logic" for why it is OK to ban The Gay from gay-marrying each other? You know, the Kentucky whose governor is a "Democrat"?

In an argument labeled absurd by gay marriage advocates, [Gov. Steve] Beshear's lawyer says in a brief filed last week at the U.S. Supreme Court that "men and women, whether heterosexual or homosexual, cannot marry persons of the same sex" under Kentucky law, making the law non-discriminatory.

So all of those heterosexuals ladies and dudes in Kentucky who are trying to gay-marry other, respectively, ladies and dudes are also barred from doing that, ergo, the state's ban applies to EVERYONE, fairly and equally, which makes it fair and equal! And also a terrible argument that will probably not sway the Supreme Court, but it may garner a few chuckles during oral arguments, so there's that.

You may recall that last year, U.S. District Court Judge John G. Heyburn II told the state its ban was unconstitutional because he is a biased judicial activist, obviously. Oh, and also:

In America, even sincere and long-hold religious beliefs do not trump the constitutional rights of those who happen to have been out-voted.

But like all the other sad states who've gone cry-babying to higher courts for a second opinion, Kentucky did not leave well enough alone and accept defeat. Homo-lovin' freedom-hatin' Jack Conway, the state's attorney general, said he wasn't even going to bother wasting his time and the taxpayers' money to fight to the bitter end for the right to discriminate against gays (and straights who want to do gay marriage, apparently), so "Democrat" Gov. Steve Beshear hired himself some private attorneys to keep fighting anyway, not that you should read into that AT ALL:

Beshear has declined to discuss his personal view of gay marriage and said he is defending the state's ban because he thinks the issue should be decided by the nation's highest court.

Kentucky -- as well as Michigan, Ohio, and Tennessee -- found a sympathetic ear at the Sixth Circuit Court of Appeals, which opined that those states' bans on gay marriage should stay in place, ACTUALLY, because "tradition" and also, they are but lowly caveman judges, so who are they to question the wisdom of voters who passed the ban in the first place? No, really, that is what they said:

How can we say that the voters acted irrationally for sticking with the seen benefits of thousands of years of adherence to the traditional definition of marriage in the face of one year of experience with a new definition of marriage? A State still assessing how this has worked, whether in 2004 or 2014, is not showing irrationality, just a sense of stability and an interest in seeing how the new definition has worked elsewhere. Even today, the only thing anyone knows for sure about the long-term impact of redefining marriage is that they do not know.

The Sixth Circuit also concluded that despite the Supreme Court's various rulings on marriage equality in recent years, it is UNPOSSIBLE to know what the Supreme Court thinks about marriage equality. So until Kentucky and those other states get a handwritten note that says "Dear Kentucky, your ban on gay marriage is unconstitutional, stop that," it's best to leave the ban in place, just to be safe.

FYI, Kentucky, that note from the Supreme Court will probably be typed, not handwritten, but as we've mockingly said to you and all the other sad gay-haters, we are quite confident it will be on its way to you shortly.

Check your mail in June.

As the execution date for bans on marriage equality draws nigh, Bigot-Americans are desperately gasping for any possible justification (spoiler: there is none) to keep their beloved discriminatory laws in place. Not that it will work, because we have boldly predicted that the Supreme Court will soon issue a once-and-for-all decision this term that no, you cannot ban The Gay from getting married because that is "unconstitutional" and also "wrong" and sweet holy Moses, lawfully wedded buttsex and scissoring is NOT going to destroy your marriage or America, kindly shut the fuck up.