Kid-Dumper AR Rep Justin Harris So SO Sorry ... That DHS Screwed Him And His Family (Video) 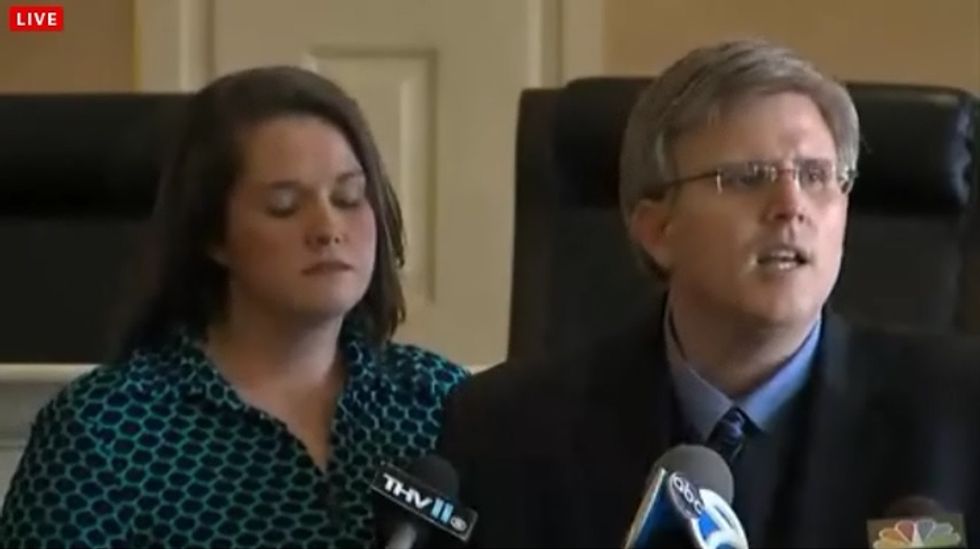 After the older of his two adopted daughters -- at the mature age of six -- was raped by the man to whom he had "rehomed" her, Arkansas state Rep. Justin Harris (R - "God's Kingdom") gave a press conference today to attempt to justify it. (He did not attempt to justify the rape, by family friend Eric Francis, to whom he had turned over his two adopted daughters in late 2013; he merely attempted to justify the rest of it.) Harris started by "clarifying" that "the victims here are the children," since the country and the Internet did not take well to his sad claim yesterday that it was he and his wife who had "suffered a severe injustice." While the girls were "the real victims," he back-pedaled, he and his wife had been "failed" by the Department of Human Services, which is really to blame.

In this afternoon's press conference (see video above), he began by thanking the reporters in attendance for their "support," which was probably not their intention in attending. His voice soon breaking, he claimed that he and his wife, Marsha, had rehomed the 6- and 3-year-old -- and more on the number of daughters in his custody in a moment -- to Eric and Stacey Francis only after an unbroken streak of terror by the girls, who had been abused in their birth family, and for whom no kind of therapy, he said, was working. He claimed that he attempted to talk to DHS -- the agency that had arranged and confirmed the Harrises' adoption of the girls -- about returning the girls "multiple times" but was met with "nothing with hostility." If he attempted to return the girls, Harris says an unnamed worker at DHS told him, he would be charged with child abandonment, and his three birth sons could be taken away as well.

A statement to Wonkette from DHS's communications director, Amy Webb, regarding Harris's charge of threats by DHS to his family should he attempt to return the girls said, "I am prohibited by law from discussing specific cases, including that allegation. Here's all I can say … We understand that in rare cases, a successful adoption is impossible to achieve. In those situations, there is always an option."

Asked by reporters present who the unnamed DHS worker was, Harris declined to say. He was not as reticent in detailing the girls' mental health issues, though -- and said that DHS had not informed his family they were getting girls who were disturbed by the trauma of their upbringing in their birth family.

DHS, naturally, can't address specific cases of children under their aegis. But they did tell Wonkette this:

Though Rep. Harris is talking about this adoption, by law we cannot do so and are concerned about the very sensitive and protected information that has been released about vulnerable children. We also are prohibited from clarifying any inaccurate information. We can say that when parents adopt children from us, we disclose in writing medical and psychological information and diagnoses and have the adoptive families sign those forms.

In trying to explain the rehoming, Harris first acknowledged the existence of a THIRD foster daughter -- eight years old -- whom he successfully petitioned DHS to remove from their home before the adoption of all three sisters could be finalized. According to Harris, her violence resulted in an inpatient stay at a mental facility and a new foster home. The Arkansas Times reports:

The source also tells us that the girl has since been adopted by another family and is now in good hands, although no other details were provided. [...] [I]t appears that her adoption was disrupted through formal DHS channels before it was ever legally finalized. That only adds to the question of why Justin and Marsha Harris rehomed their two remaining adopted daughters with another family rather than returning to DHS.

Harris said that the oldest girl lived with them for about five months, and then they brought the two younger girls into their home as well. He said that DHS had "misled" led them to believe that the two younger sisters had no severe issues. The older girl was "so traumatized by past abuses" that she would "spend eight hours a day screaming and in a rage," and therapy did not help her. He added that after she "bashed an unrelated two-year-old in the head with a rock," they found that she had been collecting "sharp rocks and metal rods" under her bed, and said the when they confronted her, she "disclosed her plan to kill every member of the family." After that, the Harrises insisted that she go back to DHS; DHS took her back and placed her in inpatient care, during which the Harrises continued to visit her. Eventually she was placed with a new family, whom she presumably didn't murder.

She was terrifying, but not so much that she couldn't be used on Harris's 2012 campaign website

The Harrises nonetheless had serious problems with the two younger girls after adopting them, Harris said, continuing with in-home therapy, despite what he described as "ongoing violence" toward the couple's three sons. "We believed that if we continued to show love and affection, the situation would turn out okay. We were wrong." He said that he and Marsha were not prepared to deal with what he says was the girls' "severe undiagnosed reactive attachment disorder," but that they pressed on.

(While Arkansas mandates a six-month trial period before finalizing an adoption, for precisely this reason, Harris previously said the younger girls didn't begin to act out until after the adoption was finalized -- he said that realizing they were in their "forever home" brought about the six-year-old's rages. We do not think Rep. Harris knows what the term "forever home" means.)

One of the weirder-sounding therapies that they tried was to remove the 6-year-old's toys and belongings, and slowly reintroduce them as part of a treatment plan. (We looked into Ozark Guidance, since the therapy sounded odd and frankly sort of cultish; they do not appear to be weird or Christianist.) He added that one of the girls was medicated to prevent her attempts to hurt her sister, and that "we even had our boys sleeping in our room for their protection."

While DHS can't comment on the girls' case due to privacy laws, Harris had no such compunction. He said that "after one of the girls crushed a family pet to death and attempted to abuse two other pets" -- certainly a horrific allegation, if true, and one that would make any parent fear for their other children -- he and Marsha were advised by a therapist, a psychiatrist and a pediatrician to remove the kids from their home. Choking back tears, Harris said that they had reached out to DHS for help with the girls, only to be "threatened with possible abandonment charges and potentially losing our own boys" if they attempted to return the girls to DHS custody. Harris was very definite about this, and said that a second DHS worker -- again unnamed -- confirmed that the family would be charged if the girls were returned.

And then, he said, Marsha decided to turn to the Francises; she had known Stacey Francis since high school and the couple had done three international adoptions. He insisted that they had no indication that Eric Francis would be trouble, as he'd had to pass a background check for the earlier adoptions. They hired Francis for their daycare because he had good credentials and experience teaching Head Start, and he passed two pre-employment background checks. "We thought we had found a perfect solution," he said, when the Francises said they were interested in adopting the girls.

Although the Francises also already had three children, just as the Harrises did, if Justin Harris worried that the girls might harm the Francises' children, he did not mention in his press conference.

Harris also claims to have canceled checks proving that he forwarded all government stipends for the girls to the Francis family -- a common question this week was whether the Harrises were enriching themselves -- though he declined to show any.

would you regift your adopted daughter to this man?

In February of 2014, a few months before Eric Francis was arrested for sexually assaulting not only Harris's six-year-old daughter, but two other girls as well, the Harrises learned that the girls would be going to live with a third family, to whom they signed over guardianship and gave consent for them to adopt the girls.

The Harrises and the three kids they kept

The reason for the Francis family to turn over the girls to a third family -- before anyone knew the six-year-old had been abused -- was not disclosed. At the new family's request, the Harrises now have no contact with the girls. DHS has vetted the family to its satisfaction, says The Times:

The Times was able to identify and contact the adoptive parents, who declined to be interviewed for this story. The mother did, however, offer one comment. "I don't like that they took this path to get here, but they are home now, and they are loved and cherished. This is God's plan. They are our daughters. They are precious, precious, amazing girls, and we are so blessed to have them."

And we are very glad to hear it!

Harris did not directly address the rape of the 6-year-old, but closed by saying that "because of what we've been through," he supports the bill by Rep. Greg Leding to ban "rehoming" in Arkansas, and also supports Gov. Asa Hutchinson's efforts to "address the systemic problems at DHS."

We suspect that "addressing the systemic problems at DHS" would mostly comprise "cutting its budget till it can be drowned in the bathtub," but we're cynical like that.

Reuters' excellent look at "rehoming" can be found here. Mostly, it's a whole bunch of pedophiles.