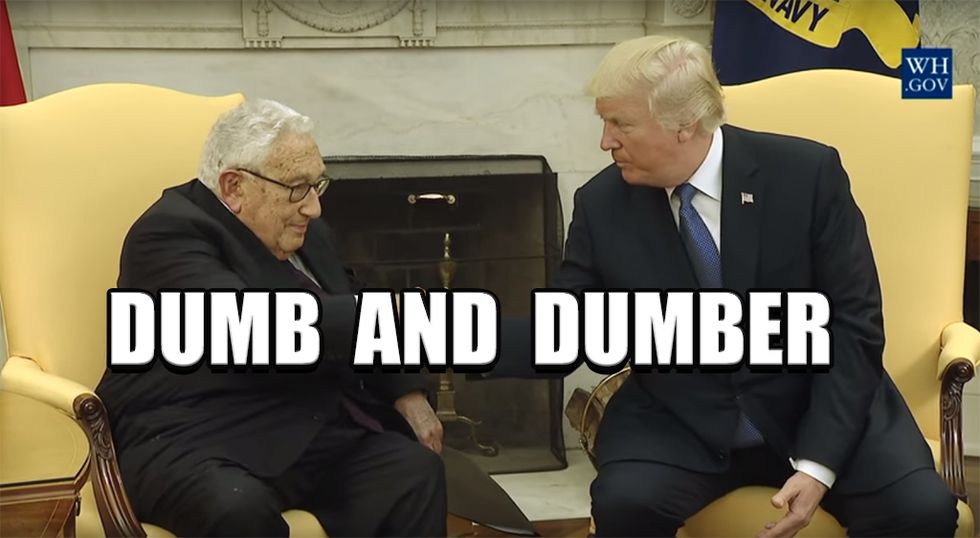 Holy jeez, Wonketariat, have we got newses for you today! Here's some of the things we may be talking about.

As the death toll continues to rise in Puerto Rico, the Trump administration is requesting to loan $4.9 billion loan for Puerto Rico. A loan for a beleaguered country that is already suffering from OUR unfair business practices.

Puerto Rico's economy is at a dead stop as people desperately wait for the Trump administration to get off its ass and send help.

California wildfires continue to grow, now leaving 17 dead, and reducing over 2,000 homes and businesses to ash.

Carter Page is telling the Senate Intelligence Committee to fuck off, and that he intends to plead the Fifth on his involvement in Trump-Russia unless they tell him what they heard him say, so he can remember not to lie about it.

Even though Trump has cut back open enrollment for insurance markets, local governments and advocacy groups are running their own ads to encourage and remind people to sign up for health insurance. FUCK IT, we'll do it live!

Trump's been up and tweeting this morning about the Trump Tax Cuts (For Rich People Only), throwing out bullshit numbers on how much the economy will grow if we lower corporate tax rates.

Don't believe the hype: the Trump Tax Cuts are a tax break for the rich, no matter what Trump and Paul Ryan say.

Back in July, while the Mooch was swearing up a storm and Spicer was "You're Fired"-ing himself, Trump threw a tantrum over expanding the US nuclear arsenal, prompting REXXON to comment that Trump was a "fucking moron."

Trump sat down with Henry Kissinger and took some advice about North Korea; unfortunately, it was bad advice. Somewhere, out there, the ghost of Richard Nixon is looking up and smiling.

Decades of defunding of bureaucrats and eggheads have pushed the government to a breaking point as statisticians struggle to accurately gather and distribute vital information for the most basic functions of government, both small and large, as well as general market stability. Thanks, dicks.

SCOTUS unanimously decided to throw out one of the two law suits aimed at stopping the Muslim Bantravel restrictions on ethnic minorities, but decided to hold off on the other (for now).

Democrats are stubbornly snubbing Republicans and sneaking protections for Dreamers into important legislation like CHIP, FAA reauthorization, and the debt ceiling.

Believe it or not, there are a few Republicans trying not to piss all over Dreamers and they're willing to cut deals with Democrats. One can only hope.

In case you haven't been paying attention, Trump has been MAGAing all the gays too. Nothing says Americana like a gay bashing Norman Rockwell painting.

Speaking of gay bashing, that asshole county clerk from Kentucky who wouldn't issue marriage licenses to gay couples, Kim Davis, has been in Romania lobbying for a ban same-sex marriage for the Liberty Counsel. Apparently failing upward is an attainable goal for some people.

Republicans are tripping all over themselves and trying to suck Steve Bannon's cock for all that Mercer money and free publicity from his Russian troll army.

Vulnerable democrats are nervous about Russian fuckery in the 2018 election after Trump and other Republicans neglected to back policy that would have helped shore up electoral systems.

Entrenched Democrats are on their guard as progressive primary challengers begin to emerge ahead of the 2018 and 2020 elections.

A new Morning Consult poll shows Trump's poll numbers have fallen in every state, and in states with the most vulnerable Senate seats his LOW RATINGS are now above 50 percent.

Trump SWEARS he's not about to "You're Fired" Chief of Staff John Kelly after a story emerged with a source calling their relationship "irreparable."

Interior Secretary, Navy SEAL, and genuinely crooked bastard Ryan Zinke is now admitting to MOAR shady events and fundraisers with big donors and lobbying groups while on official government business, like a ski resort and an Alaskan steakhouse soiree. LOCK HIM UP!

Mitch McConnell wrote a hilariously bad op-ed to Democrats that is all, "It's just us baby, Trump's not here - Wait, where are you going?" The fucking balls as this guy.

In what can only be described as a resurrection of the #FailWhale, Twitter will let Marsha Blackburn keep her fucked up campaign ad after all, "after reconsidering the ad in the context of the entire message."

A series of shady stock transactions suddenly ran right before Labor Day, and now the AFL-CIO wants the SEC to investigate Navient, the massive student loan giant, because it's too coincidental for those trades to go down right as the Education Department announced it wouldn't be policing loan companies like Navient.

Conservative lobbying groups are going all out with robo-calls and ads in an attempt to scare/shame voters away from Danica Roem, who could be Virginia's first openly transgender elected official.

The cop in Utah who dragged and arrested the nurse who wouldn't illegally gather DNA from an unconscious suspect has been fired. Good. Note that the patient ultimately died.

Chinese president Xi Jinping is pushing hard to build up the Chinese military while two of its top generals have mysteriously disappeared.

Russian fuckery might be the cock of the walk, but Chinese spy games are still serious a real threat to economic stability.

Catalonia didn't "officially" declare their independence yesterday, and now Spain wants to know WTF is up.

The US flew two B-1B bombers with South Korean and Japanese fighters for a series of bombing drills along the coasts of South Korea and Japan just to piss off the DPRK.

A coalition of the willing is forming around Trump in an effort to trick convince him into supporting the Iran nuclear deal.

Israel actually told the NSA it was breached in 2015, and that it had found bits of hacked material on networks from Russian antivirus suite Kaspersky Labs.

Trump's best friend, Tom Barrack, seems like a nice guy, but he also seems really shady considering he's been there to clean up after Trump (and Prince Kushner's) mess for 30 years. Interesting story! We'd read it if we were you!

Butthurt over the bad press, the head of the national sportsball league sent a letter to all 32 teams asking to "move past this controversy...to honor our flag and country," which Trump promptly latched on to, threatening to revoke the now non-existent tax breaks that the sportsball league used to have. Meanwhile, team owners are quietly mumbling about their next moves.

Hillary Clinton and Barack Obama have mean words about super rich pervert Harvey Weinstein; so of course the GOP made an attack video as if that video of Trump grabbing pussies didn't exist.

Caterpillar enthusiast and former Chicago Bears coach Mike Ditka went on a radio show and bitched about all the sportsballers who keep protesting the national anthem to show their solidarity in opposing police brutality and racism by actually saying, "There has been no oppression in the last 100 years that I know of...Now Maybe I'm not watching it as carefully as other people."

During the BET Hip Hop Awards last night, Eminem rhymed some mean words off the top of his head about Donald Trump. [Video]

And here's your late night wrap-up! Stephen Colbert found the results of Trump and REXXON's IQ tests; James Corden is angry about Trump's grammatically incorrect insults; Jimmy Kimmel told the story of that time in 1990 Frank Sinatra told Trump to fuck himself; Seth Meyers and Amber Ruffin ladysplained the shit out of oppression to Mike Ditka; and Jim Jefferies BRILLIANTLY exposed the civil war inside the Hawaii GOP.

Do your part! Help us pay our bills with your money. We're supported by people, and we do it for the people!
Dominic Gwinn