KKK Dude FREAKED OUT When Latina Reporter Turned Out To Be Black, Too 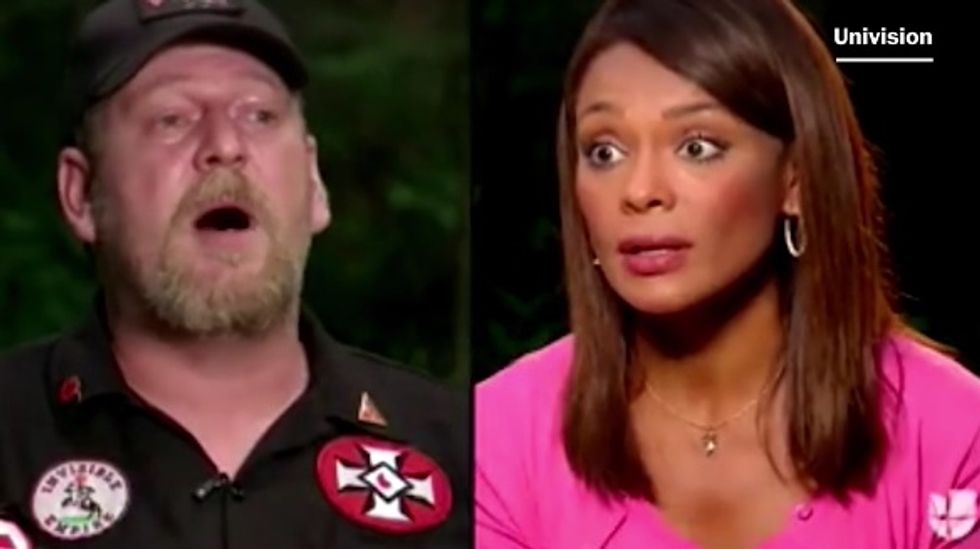 Can't you just smell his superiority?

You really have to feel for poor Christopher Barker, the "imperial wizard" of North Carolina's Loyal White Knights of the KKK, who was the victim of a complete ambush by the Univision TV network. The network had arranged for Barker to be interviewed in late July so he could explain his important views with Univision's Latino audience, and let him know that the interviewer, Ilia Calderón, would be a Hispanic “woman of color.” But when Calderón arrived, the poor racist was astonished to find out they gots black Hispanics, too, which rattled the good ol' boy something fierce. Those people are tricky that way. The Washington Post explains:

[The] KKK leader appeared taken aback, according to Calderón and her producer, María Martínez-Guzmán. He had expected someone like the rest of the predominately Hispanic, lighter-skinned news crew, they said.

But Calderón is black. Barker told her she was the first black person to step on his land in his 20 years of living there.

The interview with Barker and his superior white-lady wife, Amanda Barker, was conducted well before Barker and his Klan buddies marched in Charlottesville, Virginia, last week, and aired on Univision last night. The network had spent months setting it up to "provide viewers with an up-close look into a white supremacist’s views," as Calderón told the Post. What viewers learned was that the white supremacist doesn't like people of color, no sir, not one bit. We bet that was an eye-opener. Here's an excerpt, in which Barker explains that Calderón, who immigrated from Colombia and is a U.S. citizen, needs to go back to her own country, which would be the one she's already in.

Barker: If you love your country, why don't you go back? Why're y'all comin' up here [garbled --"chasing dollars?"]

Barker: We have nothing here in America, ya’ll keep flooding it. But like God said, Yahweh Himself said, we will chase you out of here, and it'll be a [garbled --"thorn?" "storm?"]

Calderón: Are you going to chase me out of here?

Barker: No, we’re gonna burn you out.

Calderón: How are you gonna do it? How're you going to do it with 11 million immigrants?

He seems nice. And maybe a bit confused on who exactly was on what side in WWII. (We are joking of course. America and Britain only got involved on the wrong side, against the Nazis, because the International Jewish Bankers who secretly control both countries forced them to. This is really something your White Power Rangers actually believe.)

Calderón seemed, to say the least, a bit incredulous: "You’re telling me you’re going to burn me," she said. Barker thought that was perfectly obvious and sensible: "Yeah. You’re sitting on my property now."

After Barker said, "To me, you're a nigger. That's it" (and his wife interjected "Watch your mouth" and chuckled), Calderón replied, "I find that offensive." Barker bravely said that he didn't "give a flying fuck" about that, and Calderón added, "My skin color doesn't define me." While it's not in the video above, WaPo reports that Barker's reply was simply precious: "I’m way more superior than you’ll ever be." Glad to know that's settled.

There were also moments of cultural misunderstanding, we learn:

Calderón told The Post she struggled at times to understand Barker, partly because English is her second language and because of his accent. She didn’t initially understand one of the terms he called her: mongrel.

“I’ve been here over 20 years and we’ve never had a black person or whatever you want to call yourself, you’re a mongrel to me,” Barker said. “We’ve never had one. We don’t let them around.”

Calderón also asked Barker whether, if it were necessary in a hypothetical medical crisis, he'd allow one of his children to get a life-saving organ donation from her, if she were a match. Barke scoffed at the very idea and whitesplained the indisputable medical truth to her:

He told her it was not possible, Calderón recalled, claiming that his blood was not the same as hers because of their different races.

Well, then! By the sacred insane eyes of Nathan Bedford Forrest, there's another reason to expel all immigrants, if they're unaware of such obvious racial categories and scientific facts.

As a follow-up to the interview, we learn that the Barkers both attended last week's rally in Charlottesville. The nice white folks told North Carolina TV station WBTV in an interview that they were perfectly OK with the death of Heather Heyer after a march participant drove his car into a crowd of counter-protesters, killing Heyer and injuring 19 others:

“I really hate that that girl died, but she had a choice to be there that day,” Amanda Barker told WBTV.

Her husband disagreed: “I don’t hate that she died, because she’s a Communist,” Christopher Barker said. He blamed the violence on the “antifascists” and on the lack of security at the protests.

“When a couple of them die, it doesn’t bother us,” he told the station. “They’re always attacking and messing with our rallies.”

See? Superior Aryans, just like the Bible says exactly nowhere. We're starting to think Barker may have a point with his thoughts on medical science -- more research on Human-to-Klansman transplants may be needed, since surely a kidney from a decent person would refuse to be lodged in Christopher Barker's body.

We'll just close here with a thought from the right Rev. Jesse Custer, of the Preacher comic books: