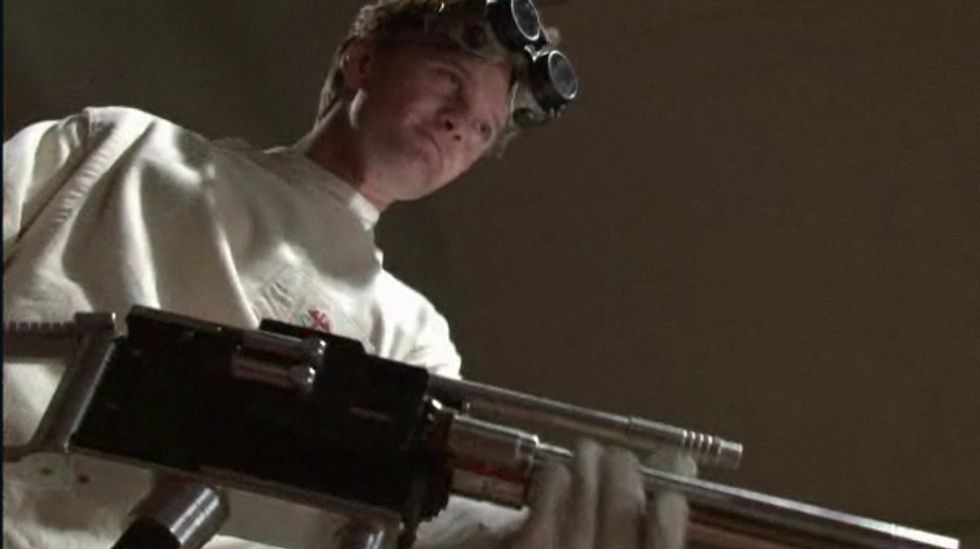 And his application to the Evil League Of Evil was going so well...

You have probably been wondering for YEARS (a bit over two of them, to be precise) what happened to those idiots in upstate New York who were arrested for planning to use a Radiation Death Ray to wipe out Muslims, haven't you? We know we had vaguely thought of it at least once since Glendon Crawford and Eric Feight were arrested in 2013 for their plan to throw deadly radiation from the back of a truck at a mosque and a Muslim school, and thus strike a blow against Islamic Radicalism in the USA. Well, one of the genius mad scientists, Crawford, is finally on trial, and his lawyer is arguing that undercover government agents entrapped him and pushed him into playing Radiation Terrorist. His pal Feight pleaded guilty in 2014 and may or may not testify against Crawford.

The prosecution presented some pretty wonderful details of the duo's smart science-fictional plot:

The men also planned to attack the White House, according to a recording of their May 2012 conversation played at the trial, in which Crawford described himself a Klansman and called the remote-controlled device "Hiroshima on a light switch."

As we explained in 2013, the real surprise about these doofuses is that, having both worked in electronics/engineering, they should have known that their planned freeze ray wouldn't have stopped the world, or even some guys bowing toward Mecca. The "death ray" was pretty much a bog-standard industrial X-ray machine in the back of a van. The idea was that they'd park it outside a mosque and turn on the machine, bathing the evil Muslims in deadly radiation. Just one problem with that plan, as a scientist from Renssalaer explained when the story broke:

The central difficulty in building a working version of the alleged device is the nature of how radiation works. The intensity of radiation diminishes rapidly as you move away from the source — it’s an inverse-square relationship between intensity and distance.

So sure, death ray, but only if you have Doc Brown's Mr. Fusion to run it, and the whole device is a lot bigger, and nobody notices that you've parked a Firefly-class starship next to the mosque.

But darn those government lawyers. It turns out that when it comes to charges of "attempting to produce, construct, acquire, transfer, receive, possess and use a radiological dispersal device" and "conspiring to use a weapon of mass destruction," it really is the thought that counts, not whether you can actually make your death ray work.

Also fun: The FBI was tipped to the plot when Crawford and Feight tried to interest the Jewish Federation of Northeastern New York in their plan, because of course the Jews would want to fund a "black-bag operation" to irradiate Muslims to death. Instead of saying "Great! We'll take two," Rodney Margolis, the group's chief executive, called the police, because, as he testified Monday, Crawford scared him, triggering the FBI investigation, which conveniently hooked Crawford and Feight up with an undercover agent posing as a fellow patriot who wanted to end the Muslim Threat.

Crawford's attorney, Kevin Luibrand, is going with an entrapment defense, arguing that the infernal machine would never have made it past some sketches on paper -- Dexter's Laboratory notebook paper, we'd guess -- if the feds hadn't kept supplying Crawford with equipment. Crawford merely "has strong political views and he saw Muslim extremism in Europe coming here," Luibrand explained.

We're going to keep our eyes open for further coverage of the trial, since Judge Gary Sharpe has given prosecutors the go-ahead to show jurors the device in whatever state of construction it had reached when the Mads were arrested. We bet it looks nothing like this sleek 1950s model imagined by Charles Addams: