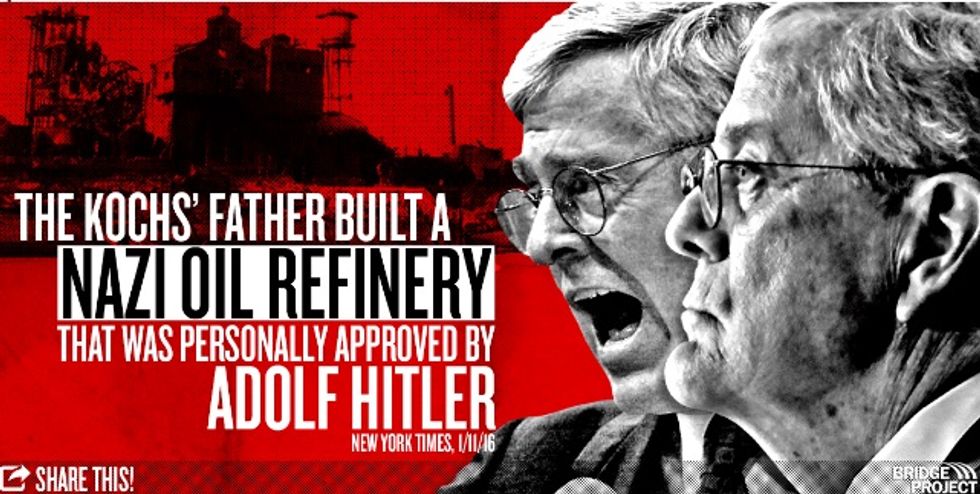 we're Wonkette, and we approve this message

Obviously as political bloggers, we get lots of chances to call people Nazis or compare them to Hitler, because why not? Going full Godwin's Law on the Internet is as American as apple pie. Or something. But it is a rare treat when we can learn that someone we already loathe -- in this case, Fred C. Koch, daddy to conservative billionaire dickweeds Charles G. and David H. Koch --  was literally Hitler-approved. And no, before you ask, we didn't read this on some left-wing version of Infowars. It is all right there in the pages of the paper of record, in a piece about a forthcoming book from New Yorker writer Jane Mayer.

The father of the billionaires Charles G. and David H. Koch helped construct a major oil refinery in Nazi Germany that was personally approved by Adolf Hitler, according to a new history of the Kochs and other wealthy families.

Imagine us now doing that low whistle of surprise that people always do on television shows but no one does in real life. That opening paragraph is quite the lede, isn't it? We envy the person who got to write it. Sounds like Fred Koch got the chance to go full Hitler because he was friends with another gazillionaire who already really dug Nazis.

One venture was a partnership with the American Nazi sympathizer William Rhodes Davis, who, according to Ms. Mayer, hired Mr. Koch to help build the third-largest oil refinery in the Third Reich, a critical industrial cog in Hitler’s war machine.

The Kochs at first had no comment on this this except to whine about how Jane Mayer has never been very nice to them boo-hoo. But then lo and behold, they actually fessed up and sent a nice note to all their employees about how, yes indeed, they did some bidness with Hitler, but so did everybody else back in the day.

Dave Robertson, the president and COO of Koch Industries, submitted a note to the company's employees on Tuesday afternoon regarding the Nazi reports. In it, he acknowledged that Fred Koch's company, Winkler-Koch engineering, helped built an oil refinery in Nazi Germany and that the contract was signed in 1933.

"That signing was nearly six years before Germany invaded Poland," Robertson wrote. "Meanwhile during that same period, many iconic U.S. companies were doing business in Germany, including Coca-Cola, General Motors, Ford and IBM.

Yeah, well, Coke probably didn't propel the German war machine quite like your oil refinery did, now did it?

You know who else is not very nice to the Kochs? David Brock, former right-wing rage wunderkind turned Media Matters founder/supreme Koch brothers troll, who has used some of his sweet Soros cash to take that nice little animated gif you see above, throw down some money for a geo-targeted ad campaign, and make sure that it shows up in the Twittter and Facebook feeds of all the Richie Rich types who live in the luxury building at 740 Park Avenue. Why there? Because it is owned, of course, by the Koch brothers.

That is some next-level well-funded trolling. We tip our virtual caps to you, David Brock.