Koch Brothers Pledge $889 Million To Least Losery 2016 Candidate, If Any 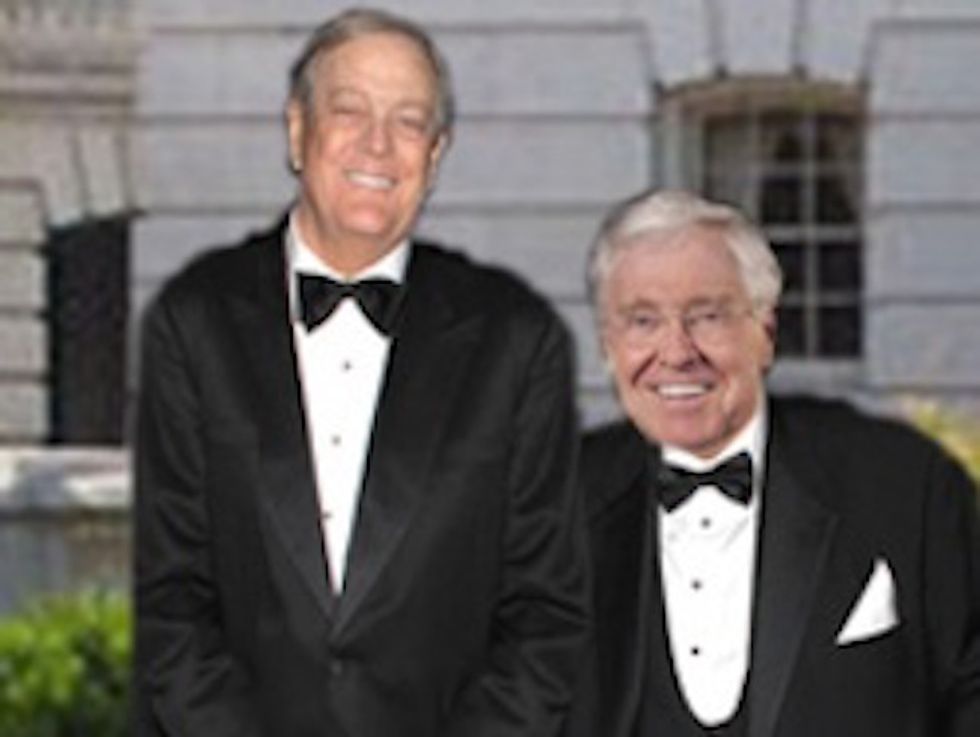 If President Obama's lame-duck "don't give a fuck" attitude has been improving your outlook on life lately, then fresh from Freedom Partners' annual winter summit comes some news that will send you crashing right back down to Frown Town. An anonymous source who attended the summit told the Washington Post that Big Energy kingpins Charles and David Koch, the richest elder vampires of the richest family of bloodsuckers in the world, have apparently committed to spending a staggering $889 million during the 2016 general election. In other words, an unparalleled stream of cash that would make Donald Trump blush.[contextly_sidebar id="vfMJVYXxkclzwKs9q9Iz2NACNmjTCOuB"]

The Kochs' Freedom Partners is a tax-exempt organization whose board is littered with former Koch Industries officials. Its agenda is predictably libertarian, and its goal a free-market society with a government so small you can drown it in a barrel of illegally dumped chemical waste.

According to the Washington Post, it's the "business lobby that serves as the hub of the Koch-backed political operation." In its first year, it brought in $256 million. In the nightmarish web of Koch organizations detailed by the paper last year, it's the green node on top:

Just so you know, $889 million is a big ol' chunk of change. In 2012, the total amount of money spent by super PACs on either side came to around $600 million, while total campaign costs for both sides was around $2.35 billion dollars. It would be significantly more than either political party's campaign committees spent in 2012. If the Kochs reach this goal, they'd be closing in on the $1 billion or more total each candidate would likely spend during the entire election. The entirety of this $60,000-an-hour money spigot would be going almost entirely to Republicans. A money bomb that big would essentially constitute buying the election.

Money like this is why Republican governors and members of Congress like Chris Christie, Scott Walker and Rand Paul are flocking to the Koch brothers' annual winter seminar, a private primary where they will be trotted around like show poodles and taken aside, Game of Thrones-style, to wander through a secret murder garden. The New York Times says the intent of the Koch money won't be to dive into specific races but instead ensure their priorities -- such as rolling back decades of regulatory law, rewriting the tax code to favor the rich even more and reversing as much of Obamacare as possible -- becomes those candidates' priorities. These well-groomed agents of Koch Industries and its many wealthy allies will, if the plan succeeds, spread their malign influence throughout the White House and Congress.

The future president may well be determined by who gives the strongest showing at the Kochs' private beauty pageant. That person will be responsible for populating the federal government with a web of lobbyists and industry cronies that makes the Bush era seem cute. We're talking Grant administration, or possibly Detroit in Robocop.

If Republicans retain their majority in both chambers of Congress, Americans just a few years from now could be reminiscing about the time we had unemployment under six percent and an Environmental Protection Agency. Also, global warming doesn't exist. But say hello to your new coal-powered car! I was already cautiously pessimistic about America's slow side into oligarchy, but it's cool to know that the rad future world from Escape From New York can one day be a reality.

Of course, there's always the possibility that the Kochs are doing exactly what you'd expect two ancient, immortal shapeshifters to do: lying. But thanks to the post-Citizens United landscape, it is now a virtual certainty that the U.S. election system is going to cross the $1 billion power-donor threshold eventually. So when you little people are running around dying of coal lung or or uranium brain or whatever the side effect of what Charles and David Koch are currently mining is, don't expect your congressman to give a shit. Enjoy your tax breaks.

On the plus side, the Koch brothers are still determining whether or not they want to fund primary candidates, which means part of this swarm of money could cannibalize itself. Early polling indicates a Clinton campaign could possibly overcome this tidal change of corporate cash, and Democrats are sure to compensate by dipping even more into the pockets of the nation's wealthy. But there's really nowhere for the Kochs to go but up, and even $889 million might just be a benchmark a decade from now.