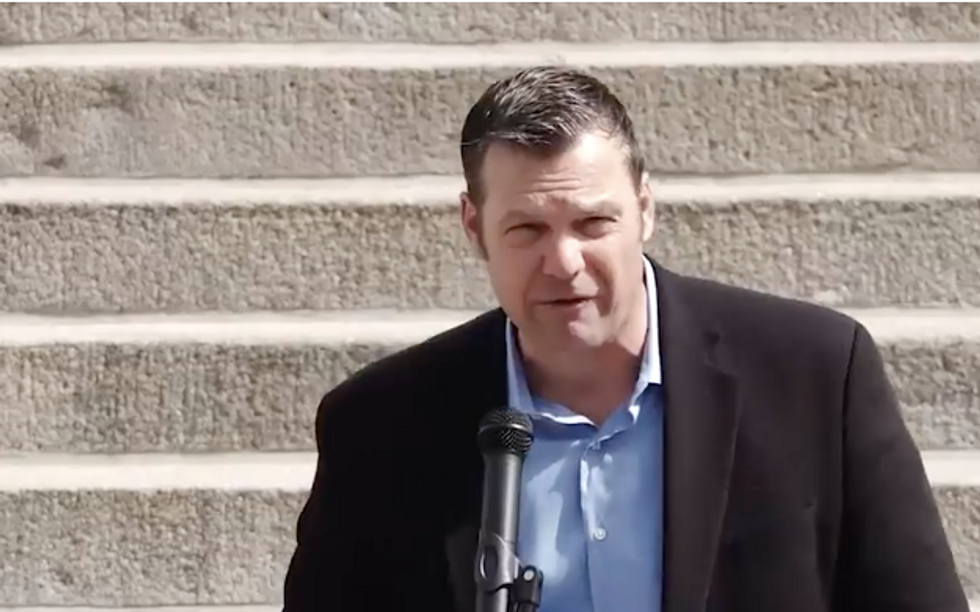 Yesterday, in commemoration of the 19th anniversary of the Columbine massacre, students across the nation walked out of their classes in protest of gun violence and the lax gun laws that lead to gun violence.

Students in Topeka, Kansas, however, were met with a less-than-friendly welcome wagon when they arrived at the Kansas Capitol building in hopes of letting their state legislators know where they stand. A welcome wagon consisting of Kansas Secretary of State Kris Kobach's stupid face and around 200 armed assholes who were all very upset that the children were not willing to volunteer to be the blood donors for their beautiful tree of liberty.

In his speech, Kobach stated:

"They were talking about how some, uh, people were gonna have some protests, some students were gonna go out and talk about, uh, their ideas on public policy. “Because you know, when you’re 16 years-old, you pretty much know everything you need to know."

Dismissing their viewpoints because of their age is, of course, some serious bullshit. First of all, they're the ones most affected by these shootings, so yes, they get to have a say. Second, 16-years-old is a perfectly fine age to form an opinion on things. Second, these are hardly opinions held only by teenagers. Third, I highly doubt Kobach and others would be dismissing the opinions of 16-year-olds if those 16-year-olds happened to agree with them. I also doubt that Kris Kobach thinks that every political opinion he had at 16 was wrong. Frankly, looking back at my 16-year-old self, I would say that person is right about far more things than Kris Kobach is.

"The school walkouts and the left-wing sponsored rallies, I think they need to be answered to. Because too often the media sees this and says 'Oh, I guess these are the only people who care about this issue." No, we care about this issue. And I have an idea. Instead of walking out of class, why don't you stay in class and spend that half hour studying the history of the Second Amendment?"

A well regulated militia, composed of the body of the people, being the best security of a free state, the right of the people to keep and bear arms, shall not be infringed, but no one religiously scrupulous of bearing arms shall be compelled to render military service in person.

WHOOPS! Looks like you are bad at history, Kris Kobach!

It is worth noting that Kris Kobach appears to have a major beef with students and education in general. Just this past week he was very mad at Kansas Governor Jeff Coyler for signing a bill intended to boost school funding by $500 million over the next five years. This boost comes on the heels of the Kansas Supreme Court ruling that the level at which the state was funding their schools was unconstitutional. Rather than funding the schools, Kobach would prefer to amend the state's constitution to make it illegal for school districts to sue the state over lack of funding. Nice!