Kris Kobach's Top Expert Flagged Voters For Fraud Because They Were Named, Like, 'Jose' 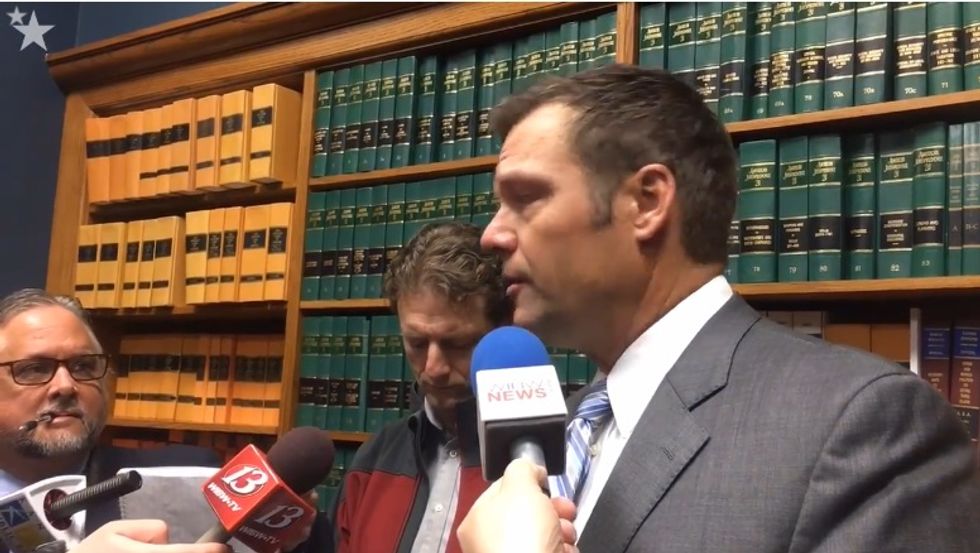 The trial in the ACLU's lawsuit against Kansas's dumb voting law, which requires people to show proof of citizenship just to register to vote, recessed late Tuesday afternoon; it'll pick up again on Monday. But Tuesday's testimony included yet more evidence that the law is built on some extremely dubious assumptions about the supposed threat of non-citizens illegally voting. Even Secretary of State Kris Kobach's own expert witnesses had to admit there isn't a bit of evidence to suggest that Hillary Clinton won the popular vote in 2016 thanks to millions of illegal immigrants voting. That's the baseless claim that led Donald Trump to set up a presidential commission, led by Kobach, to find out why he was robbed of the popular vote. Oh, huh.

Oh lord this man is an incompetent schmuck.

Kobach's main witness Tuesday was again Old Dominion University "researcher" Jesse Richman, who along with Kobach had gotten a good tongue-lashing from US District Court Judge Julie Robinson on Monday, when Richman kept trying to introduce new numbers that hadn't been provided to the plaintiffs before the trial. Judge Robinson has this crazy idea that Kobach, who's representing the state himself, ought to actually know and follow federal civil trial rules. Kobach has regularly cited Richman's estimate that there are 18,000 non-citizens registered to vote in Kansas, although Richman hasn't really presented any convincing basis for that number -- and he's also done other "statistical analyses" that estimated the number could be as high as 60,000. Early in the current trial, Kobach admitted his office had only identified about 40 non-citizens on the voter rolls, but he insists they're just "the tip of the iceberg."

Richman acknowledged Tuesday that most of his work isn't peer-reviewed, because it's written for a popular audience. We can see why he wouldn't bother with peer review, since 200 actual political scientists signed on to an open letter condemning Richman's sloppy methods and Donald Trump's claim that millions of non-citizens voted in 2016.

Tuesday, Richman testified that one of his methods for determining who might be a non-citizen used this very scientific method: He and a graduate student assistant looked at the names of people who had registered to vote under the federal "motor voter" law but had not provided proof of citizenship, and decided which names sounded really foreign. If both Richman and the assistant agreed, then that person was flagged as a probable non-citizen. We swear we are not making that up.

ACLU attorney Dale Ho asked Richman how he'd assess a really crazy foreign-sounding name like "Carlos Murguia," and Richman said yes, that's a name he would probably flag. Ho then pointed out that's the name of another federal judge at the courthouse where the trial's being held (he's only been a federal judge since 1999, so you know how sneaky those foreigns are).

Judge Robinson allowed the ACLU to show a video from November 2016 in which Kris Kobach agreed with Donald Trump that millions of non-citizens probably voted in 2016, citing a claim in a 2014 paper co-authored by Richman that claimed 11.3 percent of non-citizens had voted in 2008. Of course, that paper has been widely debunked, and is one of the main reasons all those political scientists condemned Richman's methods. In court Tuesday, Richman said his research didn't actually support such a conclusion. Funny he didn't mention it at the time, huh?

Much of Richman's supposedly damning data was based on surveys with uselessly small sample sizes. In one, 37 non-citizens were asked if they had registered to vote; six said they had. But under cross examination by Ho, Richman said he hadn't actually verified whether they had actually registered.

The ACLU then brought in its own statistics expert, Eitan Hersh, a political scientist at Tufts University, who had also examined the Kansas voter data Richman had. Hersh said he'd found five examples of people on the voter rolls who appeared to have voted before they became naturalized citizens -- but also 400 Kansans whose dates of voter registration were before they were actually born. Hirsch said it was pretty unlikely that any parents had gone out and registered their children to vote before they were born, so it was far more likely that both sets of erroneous registrations were clerical error, not fraud. He may be too optimistic about how vote-fraud panic works; we fully expect Fox News to run an angry story about all those fetuses getting registered to vote but not allowed to carry a gun.

Hersh also poked holes in Richman's data based on simply asking non-citizens whether they were registered to vote, noting that it wasn't backed up by any hard evidence from voter rolls. He also

noted the likelihood that people claim socially desirable responses. He likened someone claiming to be a voter to a single, 20-year-old man exaggerating his sexual prowess.

Hersh very politely refrained from pointing out that's not limited to survey behavior -- in fact, some people always say what they think people want to hear, regardless of the facts, and that's how some of them get elected president.

The trial will resume Monday.

Yr Wonkette is supported by reader donations. Please click here to throw us money! Proof of citizenship not required.